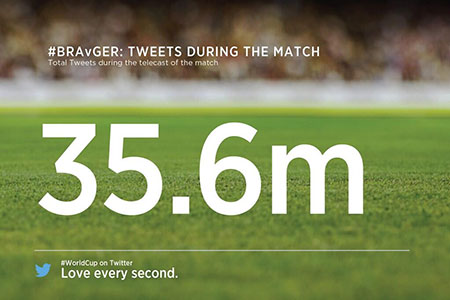 With 35.6 Million Tweets, Germany’s 7-1 #WorldCup Win Over Brazil Sets A New Twitter Record [STATS] – Tuesday, in a match that will be remembered for a long time and likely take the host nation (and its ardent fans) years to recover from, Germany humiliated a Sunday league-esque Brazil side 7-1 in the World Cup semi finals. AllTwitter

How To Be in the Top 5% of Bloggers [Survey] – Orbit Media Studios conducted a survey of more than 1,000 bloggers to better understand the processes of industry experts. Respondents answered questions about time spent on a typical post, frequency, editing, promotional tactics and more. Orbit Media Studios

32% Of B2B Marketers Want Automated Social Media Integration [STUDY] – The automation of digital content is an essential tool for all marketers, but particularly those in the business to business (B2B) sector, where delivering the right message to the right lead at the right time can mean the difference between success and failure. AllTwitter

Google’s New AdWords Editor Version Offers Shopping Campaigns Support, More Display Targeting Options – Roughly a month ahead of the rollover to Shopping Campaigns, Google has released a new version of AdWords Editor that supports the new campaign type. Google announced the old style of PLA campaigns will be shut down at some point in late August. Search Engine Land

STUDY: Facebook bouncing back in social logins, with help from anonymous login – After six straight quarters of falling behind in the social login sphere, Facebook has bounced back to take over the top spot. According to Janrain, Facebook overtook Google and LinkedIn as the most popular choice on B2B sites, posting a 1.5 percent gain and re-claiming a lead it lost in Q1 2014 after holding it throughout 2012 and 2013. It also extended its lead on media and retail sites. Inside Facebook

Experiment Shows Up To 60% Of “Direct” Traffic Is Actually Organic Search – Everyone knows that browsers don’t always report where visitors came from when they arrive at a website. When they don’t report where they were in the Hypertext Transfer Protocol (HTTP) referrer header, often the traffic is considered “Direct” — which really means, “we have no clue where they came from, maybe they typed the URL in or hit a bookmark.” Search Engine Land

Too Much Twitter Can Be Bad For Your Marriage, Sex Life, Says Research [STUDY] –  Heavy Twitter use can have a negative impact on both your marriage and sex life, says a new study. The survey, which has been documented in the Cyberpsychology, Behavior, and Social Networking journal by the University Of Missouri, asked 581 active Twitter users to report how often they used the platform and if any conflicts arose with current or former partners as a result of this usage. AllTwitter

Facebook Responds To Flak Over Study That Tinkered With Users’ News Feeds – Facebook has caught a lot of flak for a recent study by social scientists from the social network, Cornell University, and the University of California-San Francisco, in which the researchers randomly selected 689,003 Facebook users and tinkered with the number of positive or negative stories that appeared in their News Feeds to gauge the results of those users’ moods. AllFacebook

Influential Twitter Accounts Indexed More in Google [Research] – Stone Temple Consulting put out findings of research it conducted on the indexation of tweets in Google. What it found was that indexation was low overall, but that influential Twitter accounts with specific types of tweets tended to be indexed more.  Search Engine Watch

Socialbakers June U.S. report: response rate slipping on Facebook – Though T-Mobile is once again the most socially devoted Facebook brand in the U.S., overall response rate from brands dipped by 10 percent over the past month, according to a report by Facebook Preferred Marketing Developer Socialbakers. Inside Facebook

From Attract, Engage, Convert – How to Better Measure and Optimize Content Marketing Performance,  Frank J. Kenny said, Excellent piece Lee. I like to think of the top of the funnel as creating awareness by delivering value and storytelling. Then, it’s about relationship building (my clients are small and medium businesses. I know this doesn’t always scale but it does for my target market). Then comes conversion, either what I call organic (It is easy to buy) or digital marketing (copywriting skills, CTA’s, guarantees, scarcity, etc.). Then you have customer and tribe relationship management (actually throughout the funnel), leading to word of mouth, repeat purchases, etc.”

And on Is Your B2B Company Getting Ahead or Dead on these 21 B2B Marketing Basics?, Steve Kirstein shared, “Agreed – great, inclusive checklist – appreciated.”