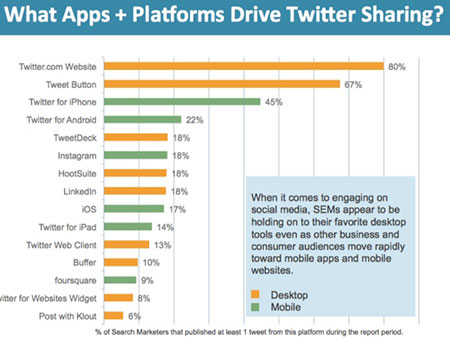 Twitter Engagement Study: Top Apps, Content Sources & Profiles Among Search Marketers – The search marketing community is one that can be defined by the topics we write about and share with our colleagues. In its latest report, “How Search Marketers Engage on Twitter,” social insights company Leadtail looked at 521 U.S. search marketers (SEMs) on Twitter to discover what topics they talked about, which content they consumed and shared, and what publications and people were the most influential in the Twittersphere. Search Engine Watch

REPORT: Facebook, Google To Represent 15% Of Total Ad Market In 2016 – Facebook and Google combined will account for a 15 percent share of the total media advertising marketing of $200 billion in 2016, according to the latest projections from market researcher eMarketer. AllFacebook

India Now Has More Than 100 Million Social Network Users (With 30% Active On Twitter) [STUDY] – With more than 1.2 billion people India is the world’s second most-populated country (and its most populous democracy), and 243 million of its citizens – about 19 percent of the nation – now use the internet. AllTwitter

Yelp Complains That Its Being Outranked By Google+ Local Listings – TechCrunch broke the news today that a Yelp internal document was recently leaked online claiming Google is promoting its own content at the expense of users. Search Engine Journal

IHOP’s #SongsSecretlyAboutPancakes Showcases Shazam as a Marketing Tool – IHOP says it decided to use Shazam because it wanted to engage with consumers longer than it can in a TV spot and notes the Shazam icon is more of a draw than Facebook or Twitter logos. ClickZ

Facebook Promotes ‘Start to Success’ Program, Offering A Dedicated Account Manager – Something advertisers and marketers have craved from Facebook is here: a direct line to a Facebook representative, through the Start to Success program. AllFacebook

Top 10 YouTube Influencers and the Brands They Work With [Infographic] – As marketers continue looking for new ways to connect with consumers online, more are turning to influencer marketing. Every platform and niche has its own set of influencers — people with an audience that trust their recommendations. Marketing agency the Ayzenberg Group has put together a list of the top 10 YouTube influencers and how those influencers are working with brands. SocialTimes

Trust in Sponsored Content Runs Low – Some 54% of internet users aged 18-65 say they generally don’t trust sponsored content, with most of the remainder only trusting such content if they trust the publication it runs on (19%) or they already trust the brand (23%). That’s according to survey results from Contently, which also found that two-thirds of respondents have at some point felt deceived upon realizing that an article or video they read was sponsored by a brand. Marketing Charts

From Digital Marketing – What Does It Really Mean? Insights from 9 Brand Digital Marketers, Benin B. said, “That’s a timely question, Lee! Although everyone gave terrific responses, the one from @tamicann resonates with me the most. Because nowadays even traditional marketing leans digital. However, the most common trait of digital is that you can track it.”