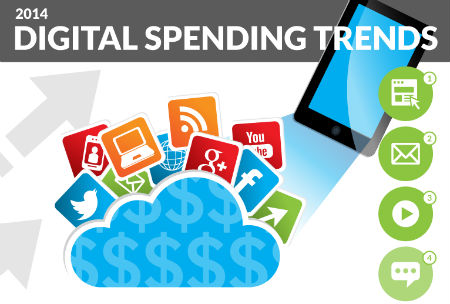 The 2014 Digital Dollar Shift [Infographic] – 58% of business to business (B2B) marketers are spending more on social media this year, with just one in fifty decreasing their spend in this area in 2014, reveals a new study. Find out all about the current state of digital spending trends in the infographic above. AllTwitter

Introducing the Internet.org App – Over 85% of the world’s population lives in areas with existing cellular coverage, yet only about 30% of the total population accesses the internet. Affordability and awareness are significant barriers to internet adoption for many and today we are introducing the Internet.org app to make the internet accessible to more people by providing a set of free basic services. Facebook

Your New LinkedIn Profile Makes You Ridiculously Good Looking on Mobile, and in Meetings – What if, minutes before you met me for the first time, someone whispered in your ear and reminded you not only where I work (LinkedIn) and what I do (product management), but also who we both know in common, whether we overlapped any years in school, or if we worked at the same company? If you knew what we had in common or any of my interests (say biking or Latin poetry), chances are that we’ll probably have a pretty great first conversation. LinkedIn

Report: Social Sharing On Mobile Devices Surges 30% In Second Quarter – Adding to the evidence that 2014 is a mobile tipping point, social data and sharing tool provider ShareThis reported today that sharing via smartphones and tablets surged more than 30% during the second quarter. Marketing Land

Study Shows Mobile Social Users Are More Active and Engaged – 64% of online adults use a desktop or laptop to access social media at least once a week. That’s a nice number. A lot nicer than the 45% who use a smartphone or the 25% who use a tablet. But when talking about social media marketing, the majority doesn’t always rule. Marketing Pilgrim

Study Shows Organic Search Responsible for 64% of Web Traffic – Groupon recently published a study showing that 60% of what Google Analytics defines as “direct traffic” is actually organic traffic. The study was conducted by Groupon’s Director of Product Management, who heads their organic search. In the study he shared details about an experiment that involved completely deindexing Groupon from Google for 6 hours. Search Engine Journal

LinkedIn Unveils Direct Sponsored Content for Better Targeting and Testing – The new feature will not only help marketers with A/B testing, but industry participants say it also indicates a big move for native advertising. Right on the heels of its acquisition of Bizo, LinkedIn has released a new feature called Direct Sponsored Content (DSC) to help marketers deliver more personalized content to specific audiences. ClickZ

Facebook: 23% of all Social Traffic in June (Pinterest Dips, Twitter Flat at 1%) [STATS] – Facebook’s slice of the social referral traffic pie got a little bit bigger last month, with the giant now accounting for almost one quarter of all social website visits, reports Shareaholic. AllTwitter

Facebook Pulling Messages from iOS, Android Apps in Favor of Messenger – Facebook users who want to send and receive messages via their iOS and Android devices will soon only be able to do so via the social network’s Messenger applications, as messaging will be removed from its flagship applications for both operating systems, Facebook confirmed to TechCrunch. InsideFacebook

Facebook Now Makes 62% of Its Ad Money in Mobile – One day, if it wanted to, Facebook could shut down its desktop site and become a mobile-only company. The majority of the social network’s advertising revenue — 62% of the $2.68 billion Facebook made from advertising in the second quarter, according to results it released on Wednesday — already comes from mobile. AdAge

In response to The Power of Empathy for More Customer Focused Content Marketing, Dan Bischoff said, “Lee, very refreshing to read this today. A lot of SEOs and various agencies are starting to get into the content game now. And like you say, none of them talk, “customer journey”, “buying cycle”, “customer insight” or related concepts.”

Dave Schneider added, “Interesting article – it’s definitely a huge oversight to not be focusing on your customers when trying to drive marketing.”