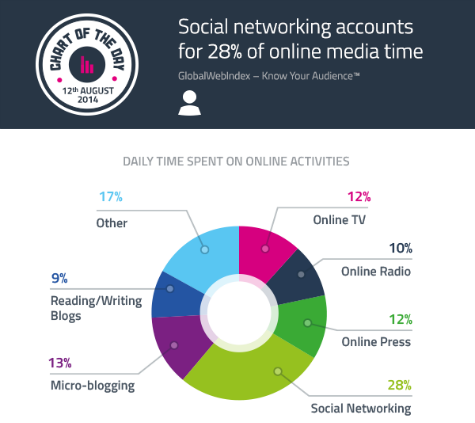 Social Networking Accounts For (at Least) 28% of All Media Time Spent Online [STUDY] – Internet users now spend a daily average of 6.09 hours on online media, and more than one full quarter of all that time that is used by social networking on platforms such as Facebook, Twitter, Snapchat and Instagram, reveals a new study.  AllTwitter

The U.S. Accounts for 41.5% of all Mentions on Twitter (UK: 9.7%, France: 5.4%) [INFOGRAPHIC] – Did you know that more than two in five of all mentions on Twitter – all those @replies and @username tags we each do many times each day – take place in the United States? Find out more from this informative infographic. AllTwitter

It Would Cost Each User $232 A Year For An Ad-Free Internet, Study Finds – We all know that ads are the lifeblood of the Internet. Annoying? Sure. You’d be hard-pressed, though, to find anyone who didn’t understand that they were a necessary evil. But what would happen if we were to somehow–miraculously?–dispense with all the ads? How much would you be willing to pay? Fast Company

Fortune 500 Blogging Down 3% This Year, First Drop In 7 Years [Survey] – For the first time in seven years, the use of a corporate blog among the Fortune 500 has dropped. Marketing Land

83% of Fortune 500 Companies Have Active Twitter Profiles [STUDY] – Twitter has always been popular amongst America’s largest corporations, and a new study has revealed that 83 percent of the Fortune 500 are now active on the platform, an increase of 6 percent from last year. AllTwitter

The Top 25 Mobile Apps (Twitter is 14th, Behind Yahoo Weather) [STATS] – comScore tracked the 25 most popular apps amongst adults in the U.S., measuring both iOS and Android, and found that 115.4 million people had used the Facebook app in June of this year. 83.4 million had used YouTube, and other Google properties (Play, Search, Maps and Gmail) also featured in the top 10. AllTwitter

Less Than Half of Marketers Say the C-Suite “Gets” Digital – Companies identified as “digital marketing leaders” in the latest marketing study from Epsilon and Econsultancy tend to have better alignment throughout their organization about the digital marketing strategy, as well as better financial performance and customer retention, than their peers. Direct Marketing News

Video Marketing Survey: 71% Say Video Conversion Rates Outperform Other Marketing Content – Marketers who fail to incorporate videos into their content marketing strategy may be overlooking a potential goldmine. According to a video benchmark report from video marketing and analytics platform Vidyard, 71 percent of marketers said their video content’s conversion performance was either somewhat or much better compared to other types of marketing content. Marketing Land

70% of College Students Post to Snapchat Daily (Twitter: 46%, Facebook: 11%) [STUDY] – Remember when everyone thought Snapchat was just a novelty app? Something trivial, used by kids? How we all rolled our eyes when Snapchat had the audacity to turn down a $3 billion buyout from Facebook? AllTwitter

From Everybody Writes: Your Go-To Guide to Creating Ridiculously Good Content – Interview with Ann Handley, Ann Handley replied, “Thanks for having me, Lee! And the fun photos… Great content IS great marketing! :)”

Go4Word said, “I really loved this article. Some really great points and points of view. We will definitely be looking at including some of the suggestions into our content marketing efforts.”

And on Online Marketing News: Most Popular Acronyms LOL, Most Social Isn’t Engaging, Twitter CEO Does Some Explaining, Kostas Chiotis said “Great round up of the latest Social Media news Ben. I think the topics I’ve found most interesting in recent days has been the study regarding mobile use and also on social media roi.”