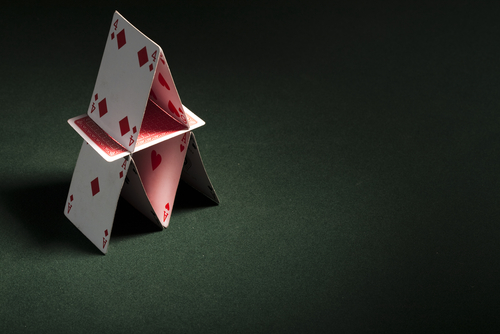 In case you missed it, the ‘ruthless pragmatism’ approach to politics of House of Cards’ Frank Underwood has stretched far beyond Capitol Hill to the world of content marketing. With the lessons learned about the changing media landscape, Kevin Spacey, Underwood’s real-life actor alter-ego, is becoming influential in Marketing as well as Hollywood.

The success of House of Cards for Netflix is unlike any previous television show and has become a symbol of the online content movement. Since the show’s release, Mr. Spacey has spoken at several conferences urging journalists and broadcasters to follow the Netflix model of producing in-depth content with a great story, yet­ he still surprised people by giving a keynote speech at the recent Content Marketing World conference in Cleveland.

At the largest Content Marketing conference in the world, he spoke to an audience of over 2,500 excited, B2B and B2C influencers and marketers. Mr. Spacey is a content marketer himself, you see. His place on the board of the freelancer website Scripted.com gives him a stake in the growth of the industry. All this together makes Spacey a true marketing influencer. 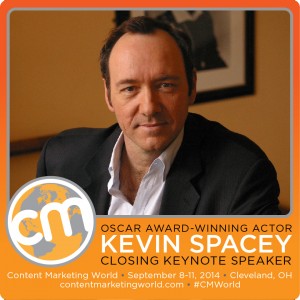 Spacey has given some great advice in his speeches lately. You might even use Frank Underwood’s ‘ruthless pragmatism’ analogy for a content marketer who follows these three content marketing lessons from Kevin Spacey and House of Cards:

1. Tell your brand’s story with content, and take risks doing it

Content marketing can be hard to sell to executives because its ROI takes a while to kick-in. Kevin Spacey’s CMWorld keynote was titled “It Has Always Been about the Story”, so you can guess his stance on the issue. Spacey has said that in pitching House of Cards, his team was planning on, “telling a story that takes a long time to tell”, and would not compromise to the traditional pilot-first TV model that truncates a show’s ability to prove its concept. It was a risk, but they were creating a story and knew they needed a serious investment to show the result they wanted.

Netflix made their bet that the story would be a good one and gave House of Cards a $100 Million budget for two seasons. In 2012, “Netflix Original Content” was just launching so the success of House of Cards, while taking up most of their overall budget, gave their brand a reputation for going against the typical pilot model and the highest quality product possible. What they knew was that this investment was worth it because they knew their customer would want it.

The investment has clearly paid off for both the Netflix and House of Cards brands. Is your brand story taking any risks? If not, the implications of that choice could be the difference between your product being a market-leader and being an also-ran, or even cancelled.

As Mr. Spacey quoted his character Underwood in his CMWorld speech,

“we’ve worked too hard and come within an arm’s reach of the prize, only to have our hands cut off just before we seize it. For those of us climbing to the top of the food chain, there is but one rule, hunt or be hunted.”

This is a ruthless pragmatism analogy for taking risks in content marketing, if there ever was one.

2. Give the people what they want

At CMWorld, Spacey spoke about the virtues of the “democratization of content” movement that has given power over the market to content consumers. By following this movement and constantly being a listener of your customer, you can give them what they already want. Like Netflix subscribers, Spacey believes content consumers should get, “what they want, when they want it, how they want it, and at a price they are willing to pay”. Netflix was built to prove this theory.

Before they signed on for House of Cards, they already knew their subscribers like Kevin Spacey and the show’s producer David Fincher (who previously produced the popular show, The Sopranos) so Netflix banked on even more customers joining in to watch the subscription-only show. Netflix’s user tracking data already showed that their customer did not simply want a single episode trial of a show and then one episode per week. Their customer wants to spend all weekend (or a single day) with the blinds closed, sitting on the couch, and eating pizza as they finish the whole 13 episode season at once.

While your business may not have that kind of product, you can work on creating binge-worthy content. A combination of marketing analytics and other resources can give your company the intelligence to learn what your customer wants, and inspiration to formulate a great piece of content to give to them when they want it. This process, when done correctly, will pay dividends in the long-run.

3. Be the best answer for your customer

While House of Cards is siloed in the Netflix online channel, the brand is heavily promoted and has been seen in several other forms, such as Jimmy Fallon has parodying the show and Underwood’s character being used in a Call of Duty videogame. When a Netflix subscriber is ready for their next binge-watching session, they have a subscription and can go back to Netflix for more content.

Netflix needs to be the best answer for on-demand content for their customers, as they are certainly not the only company in their expanding market. This can only work by following Spacey’s content advice mentioned above, “what they want, when they want it, how they want it, and at a price they are willing to pay”.

With your brand’s content, you can build upon a piece of “magnet content” that brought them in at first by having different channels for customers to encounter your products at the time they want it. There are a lot more than one silo to worry about for content marketers, so having a strategy for each is important to be the best answer when your customer is ready to ask.

Armed with these lessons, are you ready for the ‘ruthless pragmatism’ approach to content marketing? Kevin Spacey left the conference with this quote,

“Get your minds to work, express yourselves with confidence, and always remember, that it’s the risk takers that are rewarded”.

To see where you sit on the Frank Underwood scale of content marketing, evaluate the following questions with your team:

Please use the comments to tell us your answers!