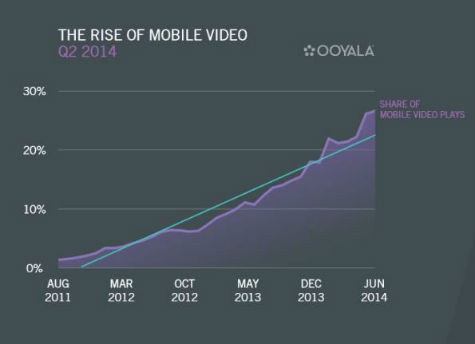 In Two Years, Mobile Video Viewers Have Increased 400% – There’s a very good chance that your customers are watching a video on their smartphone or tablet as we speak. Ooyala says that mobile video views have increased 400% in the last two years, doubling in the last year alone. Right now, 25% of all video views are happening on a mobile device and that number is expected to double again by 2016. Marketing Pilgrim

Facebook Announces The New Atlas: A Cross-Platform Ad Network – As rumored, Facebook will announce today the relaunch of Atlas at Advertising Week in New York City. Atlas focuses on people-based marketing, getting away from cookies and enabling true cross-device advertising. Erik Johnson, the head of Atlas, announced the relaunch in a blog post. AllFacebook

Panda 4.1 — Google’s 27th Panda Update — Is Rolling Out – Google has announced that the latest version of its Panda Update — a filter designed to penalize “thin” or poor content from ranking well — has been released.  Search Engine Land

75% of Twitter Users Purchase Products Online Each Month [STUDY] – Yesterday Twitter announced its entrance into the e-commerce business with its new ‘buy’ button, which allows users to make purchases directly through Twitter via a single click. AllTwitter

Why Do Brands Have Such Small Mobile Advertising Budgets? [Study] – Forrester research shows that brands shy away from investing in mobile advertising because it’s difficult to track performance. ClickZ

Twitter Says They Have More Impact On Tech Sales Than Any Other Social Network – As Facebook warns marketers about less exposure, Twitter invites tech marketers over for celebration. A new survey (paid for by Twitter) shows that tech shoppers are 40% more likely to discover new products on Twitter than any other social network. Marketing Pilgrim

Digital Tops Marketing Priorities for Retailers This Holiday Season [Study] – Only 32 percent of retailers plan to invest in mobile commerce this holiday season, despite it being defined as a “competitive weakness.” Digital is expected to be the most utilized avenue of marketing for retailers this holiday season, according to a study from eBay Enterprise released earlier today. ClickZ

Only 53% of Inbound Marketers Measure ROI – Only a bare majority of inbound marketers are measuring ROI, according to HubSpot’s latest annual “State of Inbound” report, with that result continuing a theme from past studies. But that doesn’t appear to be stunting their confidence: a significant share of inbound marketers are reporting higher ROI than last year – perhaps as previous success is the top reason given for increasing inbound budgets.  MarketingCharts

Local News Readers Share More Stories on Social Media [STUDY] – People who prefer and read local news media are more likely to share that content on social media sites than those who consume their news from national sources, reveals a new study. AllTwitter

From The B’s in B2B Are People Too – A More Human Approach to Business Marketing, Kostas Chiotis said, “Great post Lee, I couldn’t agree more with all of the comments made. I have always placed a great amount of value on relationships in any marketing situation. I think Brian puts it best when he says marketing will be from one business person to another.”

On Online Marketing News: Pinterest and Instagram Are Addictions, YouTube Most Converting, Facebook Gets Timely, Brandignity shared, “Interesting to see YouTube being the most converted platform. I think it boils down to the effort required to make a great video. A tweet you can push out in just a few minutes but a good converting video takes time and people recognize that.”

And Kostas Chiotis added, “Hi Ben, great round up of the most recent news. I was particularly interested in reading about YouTube conversion rates. I’ve been thinking for a little while now that video marketing is going to be more and more important in the future.”