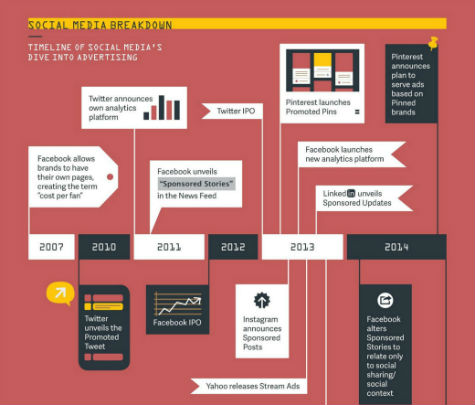 A History of Social Media Advertising [INFOGRAPHIC] – Where have social ads been and where are they heading? The infographic above shows how things started and where we are now. Check it out. Mashable

Twitter Beats Revenue Expectations Again but User Engagement Slows – At Twitter, a pattern is emerging: its ad business is growing at a steady clip, but it can’t get the number of users to grow or stick around. AdAge

Bing Ads Improves Speed, Bidding, and Targeting – In a partnership with American Express, Bing Ads has launched a marketing toolkit to help its customers with Small Business Saturday next month. The toolkit – which includes printable signage and logos, free online ads, and sample email and social posts – is the latest in a series of improvements Microsoft has made to the platform this quarter in an effort to improve its targeting and bidding capabilities as well as its speed. ClickZ

Twitter Partners With IBM to ‘Transform Enterprise Decisions’ – Twitter and IBM have formed a global partnership that will allow enterprises worldwide to incorporate Twitter data into their decision-making process via IBM tools. AllTwitter

Survey: Social Media To Influence Half Of Holiday Shoppers – According to a new holiday shopping survey sponsored by e-commerce platform MarketLive (carried out by the e-tailing Group) mobile and social channels will play a significant role in holiday shopping this year. Marketing Land

30% Of Google Ad Conversions Happen On Mobile [STUDY] – Marin Software recently published the results of a study they conducted, showing smartphones and tablets account for 30% of conversions on Google ads. Search Engine Journal

Instagram Benchmark Data From 100 Top Brands – Some 86% of brands on the Interbrand 100 list have an account on Instagram as of 3Q14, up from 54% in 3Q12, according to a recent report from Simply Measured. MarketingProfs

Official: Twitter Will Now Show You Tweets From People You Don’t Follow – Move will anger some core users, but company says its experiments showed that most like seeing added tweets based on other signals of quality. Marketing Land

Bing Now Lets You Search By Emoji – Want to search for something using popular emoji characters? Microsoft’s Bing search engine now supports this. Bing announced the news in a post today, sharing some examples of why you might want to do this. For one, perhaps you want to know what exactly a particular emoji means. Enter that into the search box, and Bing will tell you. Search Engine Land

The Banner Ad Turns 20 – Oct. 27, 1994 – HotWired, the online version ofWired magazine, runs the first-ever banner ad. “Have you ever clicked your mouse right HERE?” the ad asked. “YOU WILL” it answered. It was right. 44% of people who saw the ad clicked on it, according to Joe McCambley, who was a member of the team which built the ad for AT&T. AdAge

On How to Be the Best Answer with Topic Targeting, Kostas Chiotis shared, “Some excellent points here Lee. I think at the end of the day what we all need to keep in mind is that anything we publish needs to offer assistance or solve a problem for the reader.”

Warren Whitlock responded, “It’s a mistake to think that blogs are made by thought leaders. It usually the other way around.”

And Catania Roma commented, “This article is very interesting. Congratulations and thank you.”