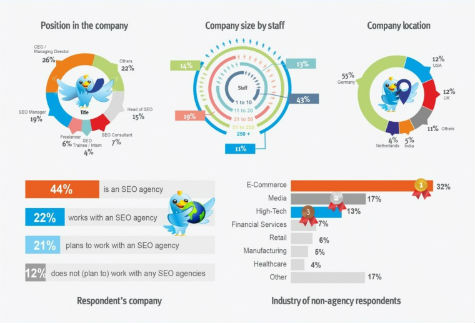 The State of SEO Agencies 2014: An In-Depth Study by linkbird [Infographic] – During the period of August and September 2014, linkbird conducted an in-depth study on the international SEO services industry. In this post I’m publishing the results of our study with some of the most important insights and recommendations based on the results. But first: a short prelude. Search Engine Journal

40% of Twitter Profiles Use an Adblocker – New platform Ello is generating interest with the promise of advertising-free social networking, positioning itself as the “anti-Facebook” within the space. Of course, it’s not just Facebook that shows ads to social media users; Twitter does, too. However, a new study has revealed that two in five Twitter users have an adblocker installed on their internet browser, second only behind Reddit amongst all social channels. AllTwitter

The 50 Most Influential Brands on Social Media – Klout has published its first list of the 50 global brands with the most social influence and engagement. Klout

88% of Businesses Think Social Media is Important to Stay Competitive [STUDY] – In their 2014 Social Business Benchmark report Hootsuite polled 750 respondents from enterprise firms on their outlooks, behaviors and challenges with social media, and found that only 41 percent believed that their company fully capitalised on the data captured from platforms such as Facebook, Twitter and Instagram. AllTwitter

Study Shows Younger Consumers Are More Influenced By Social Media – A new study shows that younger people are more likely to be influenced by social media. Does that mean that you should target youth or change up your message to the older users? Marketing Pilgrim

Facebook Gives Users New Ways to Control News Feed – That was quick: One day after Facebook co-founder and CEO Mark Zuckerberg mentioned during his town-hall question-and-answer session that the social network was working on adding more ways for users to control the content that appears in their News Feeds, product manager Greg Marra announced the release of new News Feed settings in a Newsroom post. Facebook

New Google AdWords “Automated Extensions” Report Rolling Out – First, what are “automated extensions”? This is the new term for what were once known as “annotations” — Consumer Ratings and Seller Ratings which automatically populate in AdWords ads. Search Engine Land

STUDY: Facebook, Other Social Networks Not Trusted When Sharing Private Information – Facebook and other social networks did not fare well in a new study on public perceptions of privacy from the Pew Research Center’s Internet & American Life Project, as 81 percent of respondents said they felt “not very” or “not at all secure” using social media sites when sharing private information with other trusted people or organizations. AllFacebook

Instagram Adds Ability To Edit Captions, Improves People Search – Instagram announced a few new updates and improvements today that will no doubt make a lot of users happy. Have you ever published a picture, and then minutes later think of the perfect caption for it? Or even worse, regret the caption you ended up publishing? Well now you don’t have to delete the picture and erase all the comments and likes it generated, you can just edit the caption and leave everything else unchanged. Search Engine Journal

5 in 6 Social Messages Sent to Brands Are Ignored – Over the past year the number of social messages sent to brands has increased by a pretty staggering 77 percent. AllTwitter

In response to Forbes’ 50 Most Influential CMOs of 2014, Ryan said, Great list to peruse. Thanks for compiling. As for the execs without social media accounts, to paraphrase an old adage “If you(r legal counsel feels that you) don’t have anything nice (and indemnifiable) to say, don’t say anything at all.””

On 3 SEO Predictions I made in 2005 – Was I Right? What About Search in 2025?, HeatherMeza shared, “Jack me in Johnny Mnemonic! I’m ready for my neural implant please 😉 Dude, you always have the best posts. I think your predictions are right on. I also think 3D printing is a precursor to the replicator; and that a replicator is the missing link to the world being able to rise up on Maslow’s hierarchy of needs (aka: solving world peace and achieving that Federation-like sweet life) but that’s another post… Thanks for letting me geek out Lee! #scifiFanGirl4Life”