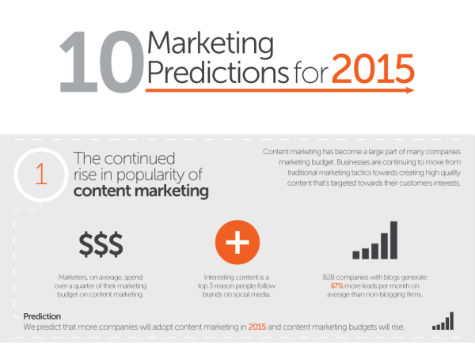 10 Marketing Predictions for 2015 [INFOGRAPHIC] – There have been many changes in the digital marketing space over 2014, and that has marketers preparing to revise their strategies as we approach 2015. So what is the future of SEO, social media, content marketing, and mobile marketing?  Find out. Social Media Today

Google: Stop Using PageRank As A Metric, We Won’t Be Updating It In The Future – The last Google Toolbar PageRank update was 11 months and 18 days ago, almost a year ago, on December 6, 2013. Google’s John Mueller has told in a video hangout that there probably won’t be PageRank updates in the future. Search Engine Roundtable

Google Launches Tool To Remove Ads From Your Favorite Sites – Google has launched a new tool that will enable publishers do away with Google source ads, while not forcing users to pay before they can access content; sounds interesting don’t you think so? SocialBarrel

Google Launches Mobile-Friendly Site Testing Tool – Google announced the launch of a mobile-friendly test tool to see if your website passes Google’s criteria for what it consider to be a mobile optimized site. Search Engine Journal

Just 17.9% of Internet Users Account For 80% of Shares: Stats – Almost one in five online users share videos with their social networks more than once a week. This is according to new research published by Unruly, which also reveals that the video ecosystem is becoming increasingly fragmented. Econsultancy

Facebook Launches FB Techwire – Members of the media who cover the technology sector have a new resource, compliments of Facebook, as the social network announced the launch of FB Techwire, which is powered by social content discovery and verification provider Storyful. AllFacebook

Twitter Offers Will Put Digital Coupons Within Tweets – The new feature will enable consumers to sync their debit or credit card with Twitter and redeem coupons online and in physical retail stores. Marketing Land

Now Showing in Twitter Search: Every Tweet Ever Written (March 21, 2006 to Present) – Twitter is now indexing every tweet every published, from Dorsey’s historic first message to that hilarious cat GIF you just posted a few seconds ago. AllTwitter