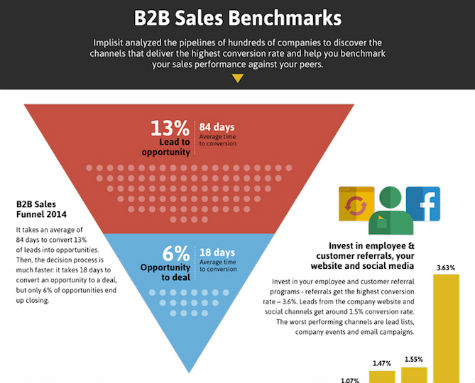 New Data Exposes the Best and Worst Customer Conversion Channels [Infographic] – A new infographic from Implisit which reveals the most and least effective channels for customer conversion might prompt you to crack the newly approved plans open once more and make a few revisions. Implisit

Facebook Gives Advertisers More Information on Conversion Pixels –  Facebook is providing more data for advertisers that use its conversion pixels. This additional data allows advertisers to get a better understanding of how their potential customers are seeing their ads. AllFacebook

Report: Yahoo Search Share Up After Firefox Deal, Google Down – According to new data from StatCounter, Yahoo has seen a nearly 2 point search market share gain in the US in the past month. Attributing it to the recent Yahoo-Firefox default search deal, StatCounter reported that Yahoo had a share of 10.4 percent vs. 8.6 percent a year ago. Search Engine Land

38% Of Marketers Do Not Use Personalisation: Report – More than a third of companies do not implement any form of personalisation in their marketing activities, according to a new report from Econsultancy. Econsultancy

Twitter Adds ‘While You Were Away’ To Top Of News Feeds – Microblogging platform Twitter has started rolling out a new feature known as ‘while you were away’ across its apps and website. The tool shows users a selection of tweets that Twitter considers as vital, and that its users may have missed while they were logged out or away. SocialBarrel

If You’re Not Marketing on Bing You’re Missing 30% of U.S. Searchers – When people hear that nearly 30 percent of searchers in the US use Bing on a daily basis, most think they can reach 70 percent of searchers without Bing or reach Bing users somewhere else. Wrong on both counts. Entrepreneur

Google to Tell Brands When Their Video Ads Are Actually Seen – Google is getting more transparent with advertisers about whether consumers are actually watching their online video ads. Ad Age

From 30 Favorite Quotes From Content Marketing Influencers in 2014, Kameel Vohra said, “My favourite is “This site, is built for people to come and get involved. … What matters to them?” Chris Brogan, Aug 12, 2014. I find it incredible how quickly all the internal stakeholders seem to forget about the customer.”