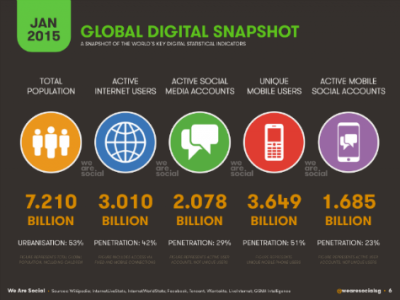 Mobile is Driving Digital Growth Worldwide [INFOGRAPHICS] – How is mobile driving digital growth? The annual report from digital agency We Are Social provides statistics of worldwide social, mobile and digital penetration, demonstrating just how far social has come — with indicators for the future. Check it out. SocialTimes

Smartphones Account For 40% of US Search Ad Spend In Q4 [Marin] – In Q4, smartphones continued to chip away at desktop paid search contribution in the US. The share of ad spend that went to smartphones rose nearly 5% from Q4 2013 to account for more than 40% of total search spend. That comes from Marin Software’s Benchmark Report for Q4 2014. Search Engine Land

REPORT: Most Questions Posted to Facebook Pages Remain Unanswered – Facebook pages are answering more questions posted by users, but more than one-half of those queries are still left hanging, according to the latest research from social analytics provider Quintly. SocialTimes

B2B Marketing Budgets to Increase an Average 6% – More than half of B2B marketers plan to increase their marketing budgets this year, with the average budget increasing by 6%, according to a new report by Forrester Research. AdAge

Study: Search is Number One Content Discovery Tool For Mobile Users – Yesterday, the IAB released a report that seeks to “rehabilitate” the mobile web. Based on a Harris survey of 2,000 US mobile internet users, it argues that despite the gap in time spent, mobile users value and heavily utilize the mobile web. Search Engine Land

82% of Sites Use Responsive Web Design in 2015? Try 11.8% – Contributor Bryson Meunier suggests the percentage of sites you believe are adopting responsive design may be greatly exaggerated. Marketing Land

Twitter Warns Users to Stop Sharing Instagram Links – The social platform is urging its high-profile users to ditch the Facebook-owned app and instead use its own photo service. ClickZ

Twitter Teams Up With Bing to Offer Translated Tweets – Twitter announced it is bringing back a project it terminated in 2013, which is the ability for users to view tweets in multiple languages. Now the company is teaming up with Bing and its translation engine to make translated tweets a reality once again. Search Engine Journal

Average User Has 5.54 Social Media Accounts, Says Study – How many social media accounts do you have? Facebook, almost certainly. Probably Twitter and Instagram. LinkedIn for work, of course. Maybe you tried Google+. What about Snapchat, Tumblr, Vine and Pinterest? You probably use more platforms that you think. SocialTimes

From How Locally Laid Got Paid by Turning Customer Feedback into Brand Storytelling, Ken McGaffin said, “”Many companies would have simply ignored the letter…” is oh so true. The result would have been another missed media opportunity. This is a great little story that should have us all thinking “what possible stories have we missed in the past – and how do we make sure we do our best to spot them in the future?” Like you James, I’ll keep an eye on how this story develops. Thanks”