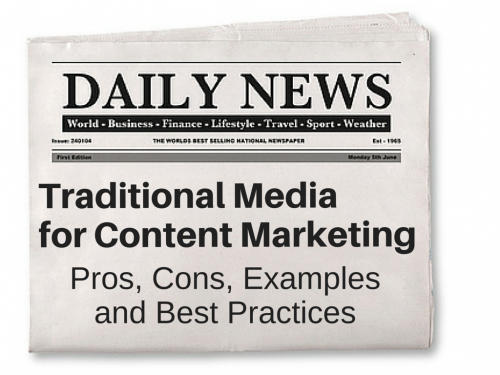 How many times has traditional media been pronounced dead in the past decade? We’ve lost count, right? While there is no denying that TV, newspapers and radio have lost a ton of ground to digital, the fact of the matter is traditional media still matters. Even to digital marketers.

In fact, some marketers are finding that traditional media is a becoming a great platform for engaging buyers. Consider brands like Doritos, Coca-Cola and others that are asking for consumers to submit short video clips via their company websites and social media channels. Those clips are curated into commercials that are airing during major events like the SuperBowl and the Academy Awards. In fact, 20% of ads in Super Bowl XLVII in 2013 included some form of crowdsourcing from major brands like Coca-Cola, Audi, Doritos, Pizza Hut and others. The incentive to participate in these contests is big for consumers willing to give up names and multiple forms of contact information just to take part.

Could digital marketers completely do that without the “traditional media” of television? Absolutely not. While some have been quick to pronounce the death of traditional media, more savvy marketers have instead asked, “how can we use this media better?”

The same goes for native advertising and sponsored content that appears in newspapers and newspaper websites from New York Times to Washington Post to the LA Times.

What Marketers are Saying:

“Most prognosticators say that by 2020 most printed media will be gone. I think anyone who makes those types of comments doesn’t understand history. Just type into Google “The Death of TV” and you’ll see hundreds of articles predicting the end of television.”

“Media consumption has changed. Traditional methods of getting in front of the consumer are becoming irrelevant. If you think acquisition is hard, customer retention has become much more difficult.”

— Hesse Jones, How the New Consumer Will Force Businesses to Change

“From cutting cable, to new streaming players beyond Netflix, to new content creators beyond traditional studios, the entertainment space is in full upheaval.”

“Take one example: The banner campaign. I kind of gave up on that a few years ago to tell you the truth. In B2B, it’s like buying eyeballs. It just wasn’t successful, but now you can actually use it reverse IP and actually target your message to very specific companies.”

Both B2B and B2C marketers continue to utilize traditional media to some effect to build awareness and generate leads. Here are a few examples:

This print ad is part of a multimillion dollar integrated B2B campaign. The ads were distributed in Bloomberg BusinessWeek, Forbes, Fortune, Inc., The New York Times and The Wall Street Journal. Sprint also ran digital and TV ads during the campaign. 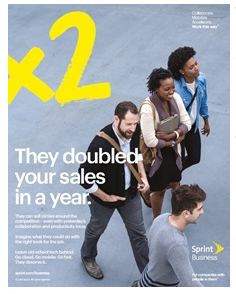 Sponsored content from Shell appears in the pages of Washington Post’s print version below. The content, supplied by the advertiser, is labeled as sponsored and receives a color treatment that helps to set it aside from editorial content. 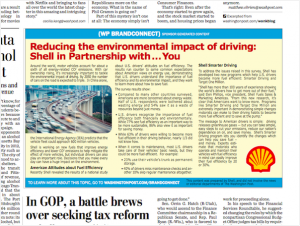 Have you been successful using traditional media  in your marketing mix? What are your tips and tricks?