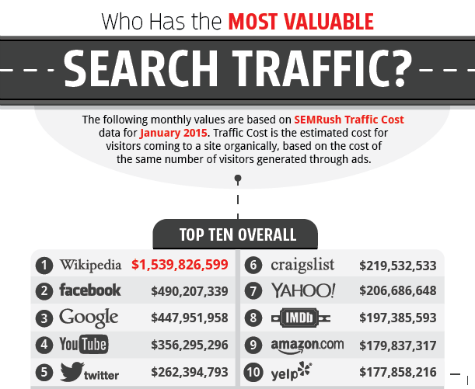 Which Sites Have The Most Valuable Search Engine Traffic? [INFOGRAPHIC] – If you’ve ever used the tool SEMRush before, you’ve likely noticed how it assigns a dollar amount to your organic traffic. This value is based on the amount of money people are bidding to rank for the keywords you’re getting traffic from organically. Check about the above infographic to see which site generates the biggest organic bucks. Search Engine Journal

Twitter Is Rolling Out Swipe To Dismiss Images – Twitter appears to be rolling out a big change to how you get get out of viewing images on the service once you’re done. The Next Web

92% of B2B Marketers Use Social Media to Share Content – More than nine in 10 business to business (B2B) marketing executives use social networking sites to distribute content, but just one third rely on mobile, reveals a new study. SocialTimes

Google+ Divided Into Photos and Streams, With New Boss – Google’s social network gets a new leader in Brad Horowitz, and likely will see the Hangouts communication service stand alone, too. Cnet

Google Wants To Rank Websites Based On Facts Not Links – The internet is stuffed with garbage. Anti-vaccination websites make the front page of Google, and fact-free “news” stories spread like wildfire. Google has devised a fix – rank websites according to their truthfulness. NewScientist

Twitter Wants You to See One Ad in Every 20 Tweets – How often do you see a promoted tweet on Twitter? Rarely, right? At least it seems that way. But Twitter has plans to change that, and more ads will be coming your way soon. SocialTimes

Yahoo Celebrates Its 20th Birthday By Setting New World Record For Yodeling – Yahoo turned 20 yesterday, and to celebrate it set a new world record for yodeling. The company pulled together more than 3,400 people to set the Guinness World Record for the largest simultaneous yodel. Search Engine Land

CMOs Plan to Boost Marketing Budgets by 9% This Year – Buoyed by optimism about the U.S. economy, CMOs said they plan to increase marketing budgets by an average of 8.7% this year, according to the semi-annual CMO Survey released Wednesday by Duke University, the American Marketing Association and McKinsey & Co. Ad Age

Twitter Most Effective Social Marketing Platform (But Facebook Most Important), Says Study – Two thirds of marketers in Ireland believe that Twitter is the most effective social platform for business, reveals a new study. SocialTimes

US CMOs Still Report Making Little Use of Marketing Analytics – US CMOs remain bullish about marketing analytics spending but appear to be failing to keep pace with their own projections, according to the latest installment of the CMO Survey [pdf] from Duke University’s Fuqua School of Business. Indeed, while CMOs expect to almost double the share of their budgets spent on marketing analytics over the next 3 years (from 6.4% to 11.7%), current levels of spending are actually down. MarketingCharts