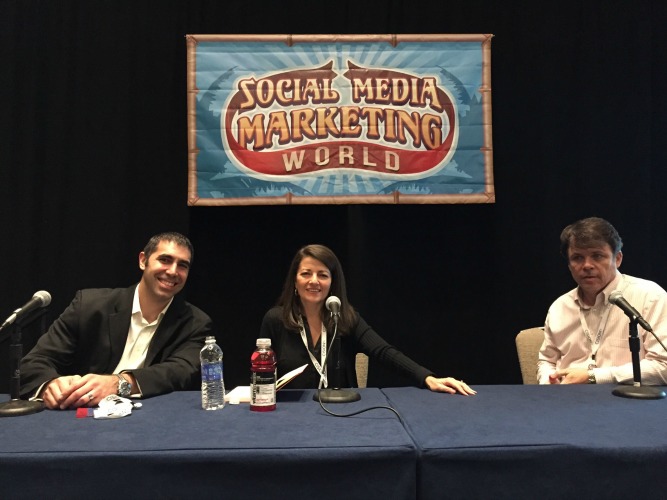 It’s a seemingly small ask to get your employees moving and grooving on social media. Yet many marketers have experienced the pain of creating social activity from within. While it might seem like a no-brainer for employees to get socially involved, many obstacles can prevent them – whether a lack of time, lack of know-how, or even fear of doing something wrong.

If you want to raise a workforce of social media champions, you can – with some strategic effort. Sure, you might be able to bribe your employees with doughnuts, send “please share this” emails high importance, or write social media activity into their performance reviews, but there are more positive, powerful ways to solicit social sharing.

I covered a panel of experts at Social Media Marketing World (#SMMW15) who shared really practical and helpful ideas on how to plow through the obstacles and help employees not only be socially active, but also act as brand advocates.

Guest stars on the panel included:

One year ago at #SMMW14, Jay Baer gave a similar presentation on the value of creating employee social media advocates. That the topic comes back this year only proves its importance to marketers.

The discussion highlighted the importance of helping employees grow their personal brand. Employee advocacy should never be just about the corporate brand. It should seek to move employees closer to meeting their own social goals while giving them a voice to engage with your brand’s messaging.

All three of the panel participants also emphasized the idea of the safety net. Participating in social media can feel scary to employees who might be afraid of accidentally stepping over the boundaries. Companies need to provide training, best practices docs, or even coaches to mitigate risk and give employees confidence.

What are the fundamentals for creating employee advocacy on social media?

According to both Poveromo, Adobe’s social training program helps employees understand how they can accelerate their career through reaching social goals and developing their own personal social brand. Jones said that Cox Communications similarly strives to get employees talking about what they’re passionate about on social media.

Adobe also gives very simple guidelines on “dos” and “don’ts” that make the boundaries clear so employees know where the line stands. This kind of training ensures employees know how they can help the brand on social media – and also hurt it. “Imagine your tweet becomes the Wall Street Journal headline of the day – do you really want that?” says Poveromo.

At Citrix, Levy said they’ve seen success with sending a weekly newsletter to get non-active employees used to sharing content across social platforms. “We all live in our inbox. If you can give them an email, that’s where they live.” Levy says brands can begin with these weekly emails. Once employees start engaging, share metrics behind the success of the social activity – so employees start to understand their impact.

What are best practices for training employees on social media?

“It’s hard to get excited about (social media) when you don’t have much of a following,” Jones said. To combat potential nonchalance about social media, Cox Communications gives employees incentives for reaching certain social media goals – like accumulating 1,000 followers or reaching a Klout score of 55.

“Your goal is not to have employees become robots of the company,” Levy said. He cited an example from Sony, where the company was charged with false advertising claims over its Playstation Vita handheld device. The Federal Trade Commission called out Sony for misleading Twitter posts published by employees, who promoted the item via request from Sony and their ad agency.

The example is a warning to brands to ask employees to share carefully and think through what could happen if a product doesn’t live up to expectations.

Do you have examples of social media disasters including employees?

When Steve Jobs criticized Adobe’s Flash Player, calling Adobe lazy, “Imagine the flurry of media coverage,” says Poveromo. “We were shocked, recoiling – how do we respond to that?” While the communications team crafted a response, one employee wrote a blog post entitled “Screw You, Apple.” The major news outlets said that was Adobe’s response to Apple.

Adobe learned an important lesson: when a crisis hits, bring in your most passionate employees, let them know you’re working on it, and give rules and guidelines on how to respond in the meantime.

Levy said at one point, a competitor made false claims about Citrix – and although employees were told to keep the information private, an employee published a blog post revealing the criticism. Some very vocal executives from both companies started to fight on social media and justified their involvement because they used personal Twitter accounts.

What do you recommend in terms of measurement and reporting back to your executives?

Levy said to look at the metrics associated with your funnel: the number of employees that are involved, emails opened, social shares, and traffic back to the website.

Poveromo said it’s important to take a step back and consider your objectives: are you hoping employees will drive awareness, conversions, traffic, or lifetime value? At Adobe, they specifically track employees involved in certain campaigns and what percentage of deals were closed because of their promotion.

What are your biggest challenges with creating employee advocacy on social media? How have you solved them?

Like today’s live coverage of #SMMW15? There’s more to come! Watch for my next post and blog posts by TopRank’s @dfriez in the next few days.