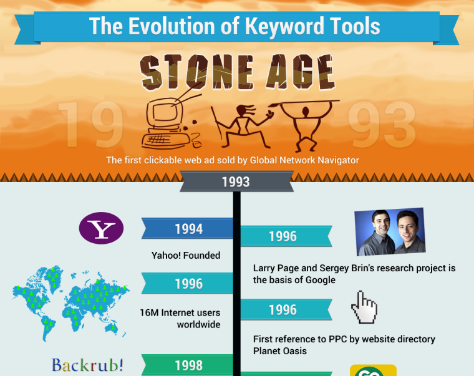 The Evolution of Keyword Research Tools [Infographic] – Keywords, phrases and topics are at the heart of search engine marketing. In a sense, words are the backbone of the Internet because without them, websites wouldn’t likely exist. Every website is built on “keywords” and topics.

Link Encoding Goes Mobile With Deep Links From Bitly – As the market for apps gets more saturated, tracking impressions across platforms becomes harder. Companies like Facebook and Google have been competing to bring the best solution for tracking deeplinks. This week, Bitly announced its own linking encoding answer to the deeplink challenge. SocialTimes

Twitter Releases New Tool For Curating Best Tweets Around A Particular Topic – One of the greatest challenges on Twitter is cutting through the noise to find tweets with the most value, insight, and influence. This week, the company released a new tool designed to tackle that challenge. Search Engine Journal

Report: U.S. Smartphone Penetration Now At 75 Percent – Nearly 75 percent (74.9 percent) of mobile subscribers in the U.S. now own smartphones. In December 2013, U.S. smartphone penetration was 65.2 percent. By December 2015, it will be above 80 percent, perhaps closing in on 85 percent. Marketing Land

Google Strongly Encouraging Webmasters To Adopt Autocomplete On Forms For Mobile – Google says webmasters should implement autocomplete markup to improve mobile user conversions but does not go as far to say it will be a ranking factor. Search Engine Land

More People Share Personal Videos on Facebook Than YouTube, Says Study – Three-quarters of internet users in the United States have recorded and shared a personal video on Facebook in the last six months, compared to less than half who have done the same on YouTube, reveals a new study. SocialTimes

Twitter And Foursquare Collaborate To Tag Specific Location To Tweets – Twitter and Foursquare have both entered into a partnership that will tag specific location to tweets. The collaboration will bring the ability to tag specific locations to tweets via official apps and the web. The upcoming feature was tweeted on Monday by Tweeter, with a video showing how it will work in iOS, according to TechCrunch. SocialBarrel

Pinterest Celebrates 5th Birthday – Pinterest on Tuesday celebrated its fifth birthday, sharing some statistics showing how the company has grown in the last half decade. SocialTimes

Facebook Introduces Riff: Make Videos with Friends – Having fun with friends is at the heart of the Facebook experience. Recently, a few Facebook employees stayed after-hours to work on a side project. Our hunch was that if you could make videos collaboratively, the creative process would be more fun and the final product would be cooler. Today, we are introducing Riff, a creative tool to make videos with friends. Facebook