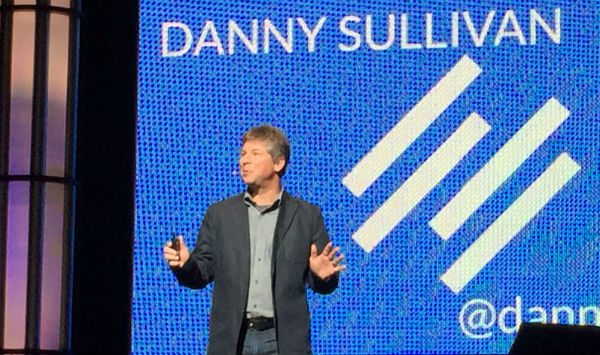 To say there have been major changes in search marketing in recent times would be a big understatement. From the increased complexity and intelligence brought about by several Google search algorithm updates to the meteoric rise of mobile device usage, search marketers have had plenty to keep them busy.

Founding editor of Search Engine Land, Danny Sullivan has been an authoritative voice in the search marketing industry for nearly two decades, so he’s certainly seen and weathered plenty of big changes since the inception of search.

In his presentation at Authority Rainmaker 2015, Danny educated and entertained the audience with insights into the current state of search and how businesses and marketers can prepare for the future.

There isn’t One ‘Front Page’ of Google Anymore 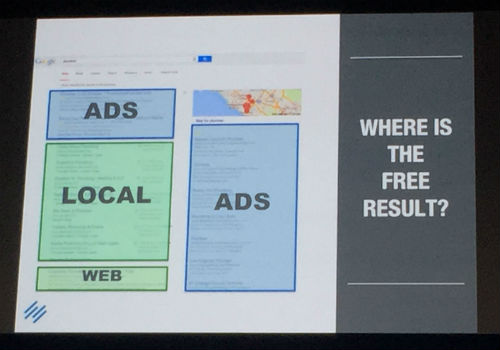 Once upon a time not so long ago, you could say “we’re #1 in Google for our top keywords”. You can still say it (and many do), but it hasn’t been true for quite a while. Thanks to personalization of search results, your front page will likely be different from mine for the same keyword search query. Try the same search a few steps or a few states away from a smartphone and you’ll see even more divergent results.

At its core, the primary objective of search engines is to provide the best, most useful results to users. Because people are not the same, we may have very different definitions of ‘best’ and may find different results to be more useful.

Search companies have known this for a while and have made incredible advances in technology to accurately and efficiently customize search results to the individual. While it was released with much less fanfare and coverage compared to most major Google algorithm updates, last fall’s Hummingbird update was a huge advance in search personalization.

As Danny so eloquently explained, if Google was a car, past algorithm updates like Panda and Penguin were like getting a tune-up; Hummingbird was a complete rebuild of the engine.

Some of the most important factors that impact search personalization today are:

Personalization is arguably the biggest evolution to occur during the relatively short lifetime of search engines and we can only expect this trend to continue. 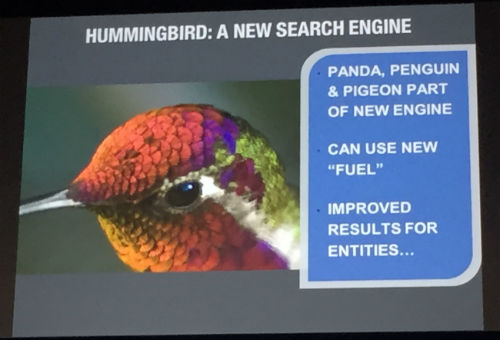 Search Engines are Getting Smarter

Did you know that Google has a memory? Not only that, but the search engine is using this ability to remember to help understand the association between consecutive queries and cater results accordingly.

Danny walked us through an interesting exercise that demonstrated this in action by performing consecutive searches for information about President Barack Obama.

To see it yourself, try first searching for “how old is Obama?”: 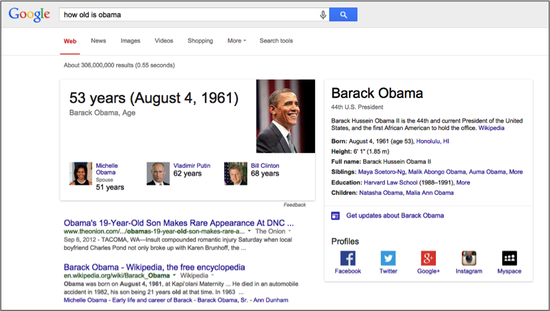 Next, try searching for, “who is his wife?”: 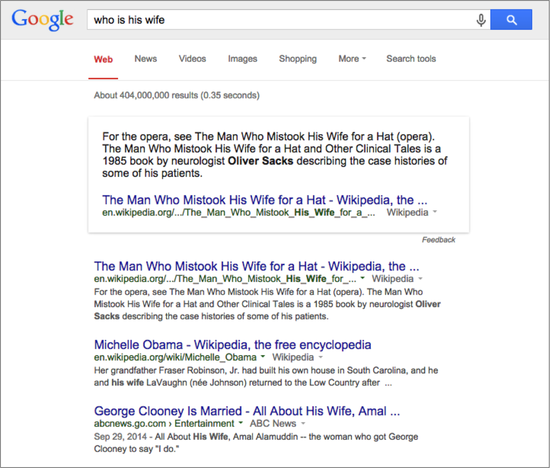 As interesting as this example may be, this feature of Google seems to be very much in it’s infancy, as it only appears to work for simple questions about very prominent things and often doesn’t work at all. For example, I tried searching on the same queries for a small sample of American celebrities, but was unable to repeat the above results for any of them.

So, while there are clearly limitations and a lot of growing to do for this kind of consecutive search query memorization to be truly useful, it undeniably opens up a plethora of interesting possibilities for the future of intelligent search.

From “Strings to Things”: The Age of Entity Search

In the old days, the role which keywords played in search was very simple. Basically, if the keywords someone was searching for were on one of your webpages, the search engine would serve it up. If you increased the frequency of the keywords on your page, you would come up above the competing results.

Today, things have gotten significantly more complex and a lot more interesting. Search algorithms have drastically increased in their ability to understand the meaning, context and intent behind user’s search queries. No longer limited to simply matching keywords in queries and web content, search engines are now able to understand connections between people, places and things (referred to as “entities”), as well as the keywords and queries people use when they are attempting to find them.

One of the biggest changes that entity search has brought is the ability for search engines to respond to questions with direct answers. In fact, research from Stone Temple Consulting found that in a sample of 850,000 Google search engine results pages (SERPs), 19.5% contained at least one direct answer.

In addition to changing the content of the SERPs, direct answers are changing the manner in which people use search engines. Rather than using simple, minimally worded search terms, people are increasingly structuring their search queries in a manner much closer to normal conversation. Another contributing factor has been the spread of voice search, which may be seeing a big increase in usage as smartwatches like Apple Watch and Android Wear gain popularity.

That said, be careful not to jump to the misguided conclusion that “keywords don’t matter anymore”, as an unfortunate number of publications tend to do every time Google makes an upgrade. Stuffing your content so full of keywords that it doesn’t read naturally or make sense is decidedly passé (thankfully), but including descriptive, relevant keywords in your page copy and meta data is absolutely essential if you want to be found. Saying otherwise is similar to claiming that language doesn’t matter anymore.

Mobile Friendly is No Longer an Option 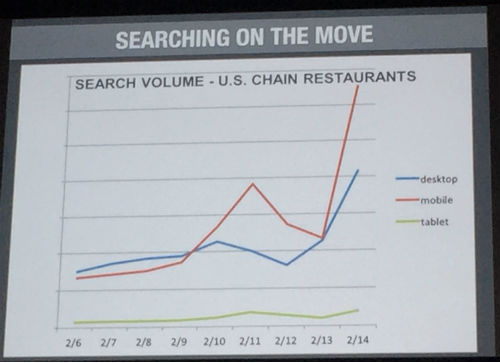 Unlike the Hummingbird update, news of Google’s recently launched Mobile Friendly update was heard far and wide. While it didn’t end up bringing quite the degree of shakeup to the SERPs that many predicted, it did serve as motivation to allocate resources into improving mobile optimization for many businesses who had been putting it off for too long.

Given that the majority of Google search traffic today comes from mobile devices, providing a good mobile experience makes sense regardless of the algorithm update.

While Google Glass is generally considered to be a failure and smartwatches have yet to achieve significant adoption, they are indicative of the trend of increasing personalization on the device level as well as an opportunity / requirement for businesses to optimize their content and services for many devices beyond the desktop computer.

It’s always preferable to be proactive rather than reactive, so hopefully in the future more businesses will take the initiative to optimize their website experiences for new devices instead of waiting for Google to scare them into it.

According to research from Conductor, organic search refers more web traffic than all other channels combined, which makes search marketing one of the most potentially lucrative digital marketing tactics in existence today.

As Danny Sullivan eloquently said, “SEO isn’t about simply how to get ranked for keywords on Google, its understanding how your audience consumes information, and making sure your company shows up there.”

Understanding your audience’s needs and meeting them with value where they are looking is a strategy that will never go out of style.

Disclosure: Copyblogger Media is a TopRank Marketing client for the Authority Conference.