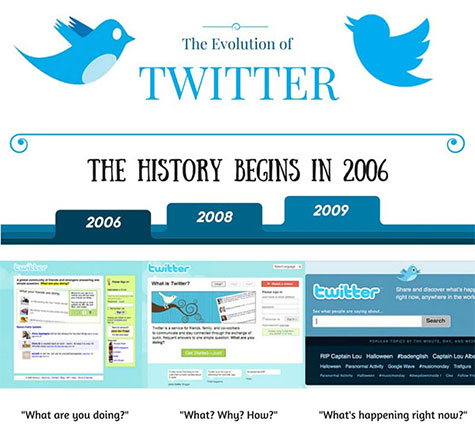 The Evolution of Twitter – Twitter which was launched way back in 2006 has definitely gone a long way eversince it was created. To date, there are more than 288 million users who are active in sharing and sending tweets in a day. In using Twitter, you can now share and read tweets anytime and anywhere. Check out the full history of Twitter in this infographic. Tech & Science

STUDY: Facebook Pages’ Organic Reach Is Not Quite Dead – The conventional wisdom about Facebook pages is that organic reach is virtually nonexistent and posts with photos perform the best, but a study by social analytics and reporting firm Locowise poked holes in those theories. SocialTimes

Study: Searchers Use Question Formats 27% Of The Time – A new study analyzes how searchers type in queries by looking at the query format and query length. Search Engine Land

Facebook Partners With Shopify to Launch Its Own ‘Buy’ Button – It was announced today that Shopify and Facebook are teaming up to launch a ‘Buy’ button that will enable people to buy items found in the news feed without having to leave the world’s top social network. Search Engine Journal

Content Marketing Now Comprises 40% of LinkedIn’s Ad Revenue – LinkedIn generated revenue of $119 million selling ads during the first three months of 2015, a 38% increase over the year-earlier period, the company said Thursday. But the outlook for the second quarter and full year was weaker than expected, and headwinds for display ad sales meant a lot rides on the continued expansion of LinkedIn’s sponsored posts. Ad Age

STUDY: Envy of Friends, Family Can Make Facebook Use Depressing – All of these studies suggesting that Facebook use causes depression, are, well, depressing.The latest comes from University of Houston researcher Mai-Ly Steers, who found after conducting two separate studies that some Facebook users find themselves comparing their lives with the activities and accomplishments of their friends and family on the social network. SocialTimes

Report: YouTube Still Trumps Facebook Video For Brands Over The Long Haul – Visible Measures data shows Facebook with 35% of video views from a sample of March campaigns, but over time the balance shifts in YouTube’s favor. Marketing Land

Report: Mobile Search Queries 29 Percent Of Total But Growth Modest – comScore released its latest “Digital Future in Focus” compilation of key stats for the US market. Most of the material has been previously exposed in one form or another. However for the first time comScore released search volumes for mobile. Search Engine Land

Twitter Improves User Experience with New Block Tools – The platform is going to enable users to block multiple unwanted accounts at the same time and share lists of accounts they have blocked. ClickZ

REPORT: Page Likes Down 3% to 4% After Facebook Cuts Inactive Accounts – Social analytics provider Quintly broke up pages into two groups — those with fewer than and more than 1 million likes — and found that pages in the former group saw their like totals drop by an average of around 3 percent, while that figure was approximately 4 percent for the latter group. SocialTimes