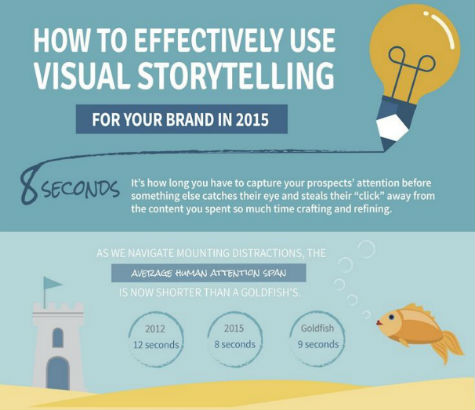 How to Effectively Use Visual Storytelling for Your Brand (Infographic) – According to a new infographic from Widen, you only have 8 seconds to capture the reader’s attention with great creative before they scroll away. Check out the infographic to learn more ways to integrate visual storytelling into your brand’s marketing. Widen

Google Moves Under Umbrella Company Alphabet – Google is listening to Wall Street, while also trying to keep its innovation going. The Silicon Valley behemoth is reorganizing under a new name — Alphabet — and separating its moneymaking businesses from the moonshot ones. Google

Smartphones Now Account For Half of US Adults’ Digital Media Time – Connected adults in the US spent 49% of their digital time in March 2015 using smartphone applications (43%) or browsers (6%), reports comScore in a new study. MarketingCharts

Only 2% of Marketers Have ‘Very Effective’ Content Strategy [Study] – According to a new study by the CMO Council, content marketing is on the rise – but less than half of B2B marketers think their strategies are at least somewhat effective. ClickZ

Facebook Extends Autoplay Video Ads, E-Commerce Ads to Others’ Apps – Facebook is bringing its autoplay video ads to third-party mobile apps that sell ad space through Facebook’s mobile ad network Audience Network, the company announced on Tuesday. Advertisers aren’t able to buy ads specifically to run on the mobile ad network; instead it’s like an overflow room, where Facebook takes the ads that run on the social network and syndicates them to others’ apps based on the advertiser’s defined targeting parameters. Ad Age

Twitter Removes 140-Character Limit From Direct Messages – If you’ve checked your Direct Messages today, you may have noticed that something’s missing: the limitation of 140 characters. You can now chat on (and on) in a single Direct Message, and likely still have some characters left over. Twitter

Periscope Users Watch 40 Years’ Worth Of Video Per Day – Periscope has released its first company report since launching in March, and the numbers are impressive: The streaming video service boasts more than 10 million accounts, and says its users watch the equivalent of 40 years’ worth of video every day. Back in April, Twitter shared that Periscope had reached 1 million users just 10 days after launch. Fast Company

In response to Study: Content Marketing Inefficiencies Cost BtoB Companies Nearly $1 Billion, Olivia Smith commented, “Nice article.Content management is of course very important , it was really shocking to hear one had to shed 1 billion for this…”