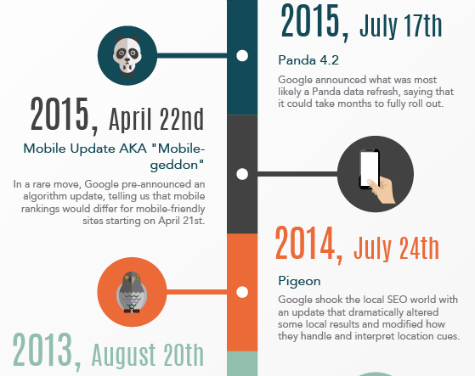 Google Algorithm Updates – 2003 to 2015 [Infographic] – Having trouble staying up with Google’s algorithm updates? Not sure if you’re dealing with Pandas or Penguins – or even Hummingbirds, for that matter? No idea what I’m talking about? Have a look at this infographic to see what’s happened and where we’ve been. OnCrawl

New Image Options Coming to Twitter – Stickers, GIFs, Overlays – One of the more interesting elements to note from the recent MTV VMA Awards – aside from it being the most tweeted about, non-sports event in history – was the use of new Twitter image options by some celebrities at the event. Social Media Today

Facebook Testing New, Immersive Mobile Ad Format – Back in June, at the Cannes Lions Festival in France, Facebook didn’t have any new products to show. But they did have a preview, a mock-up of what they envisioned Facebook ads might soon look like. Social Media Today

Report: Twitter is Growing as a Real-Time News Platform – Social media has become the way people get news nowadays. The digital and mobile revolutions have lead people away from print content consumption to getting most of their news through their social networks. Twitter has specifically been instrumental in spreading and shaping news about events and social unrest both near and far. SocialTimes

Only 17% of Brands Have The Ability To Fully Analyse The Customer Journey – A new Econsultancy report in partnership with Adobe found that companies are still struggling to embrace multichannel marketing.  Econsultancy