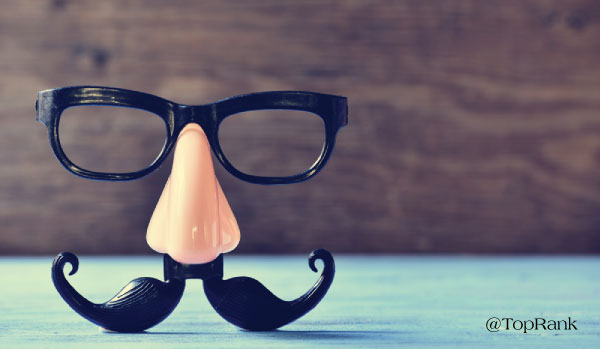 A social media marketer walks into a bar. “I’ll have a Facebook martini,” she says.

“It’s like a regular martini, but if I want to drink more than 2% of it I have to pay extra,” she says.

Okay, so maybe comedy about social media marketing isn’t a great idea. But comedy and social media have a lot in common. They’re both fast-paced, harder than they look, and unpredictable. And at the heart of it, both are about telling a compelling story and making a human connection.

I’m somewhat new to marketing, but have been in comedy—improv, standup, and storytelling—for over a decade. Much of what I learned entertaining audiences makes perfect sense for social media marketing. Here are five comedic principles you can apply to make sure your marketing efforts leave your audience wanting more.

The most basic tenet of improv comedy is the “Yes, and” rule. It means you acknowledge your teammates’ suggestions and build on them. For example, if someone holds up two fingers and says, “I have a gun!” you don’t reply, “That’s not a gun; that’s just your hand.” You might get a laugh, but the scene falls apart.

Instead, you would say, for example, “Hey, that gun was a gift from my grandmother!” To which your teammate replies, “She may be your grandmother, but she was my secret lover!” And the scene keeps building from there.

Like improv, social media is a collaborative space where the lines between audience and performer are blurry. If your brand tries to control the conversation, your audience may tune out. You can engage more successfully by joining in on the conversation around your brand, acknowledging others’ contributions and building on them.

If you analyze a really hilarious stand-up routine (I’m not saying I do that. Who would do that? That’s crazy talk), you’ll notice they have a structure built in. The comedian introduces a joke at the beginning, then refers back to it just when you had forgotten it, which prompts fresh laughter. The greats can do it multiple times during a set, to where the fact that he keeps calling back to the initial joke is just as funny as the joke itself.

Callbacks work because they create a sense of community. The callback becomes an inside joke that only the comedian and the audience know. Even if it’s only been twenty minutes, that shared experience creates a bond. They also make the audience feel smart—one of my favorite comedians, Eddie Izzard, will say, “Well remembered!” when the audience laughs at a callback.

To make your brand seem more human on social, make sure it has a memory. This summer, call back to a successful post from last summer. Take a customer reply with high engagement and turn it into an in-joke for those in the know. Remind your audience of your shared history, and you can foster a stronger sense of community.

Heckling is an unfortunate reality for standup comedians. The smart move is to ignore the occasional shout from the audience—all the heckler wants is attention, and once you give it to them, they’ll only want more. If a heckler is insistent, though the other option is to directly engage, in a way that entertains the audience and shuts the heckler down.

In social media, we have our fair share of hecklers, or “trolls.” They have nothing to bring to the conversation, but demand our attention. As in comedy, the best way to deal with a troll incursion is to ignore them. Most trolls will see there’s no attention to be had and go elsewhere. But for the persistent troll, firm and direct engagement (in a brand-consistent manner) can work, and can be entertaining for your audience, too. Just make sure to keep cool and take the high road, as the Washington Post did in this Twitter exchange: 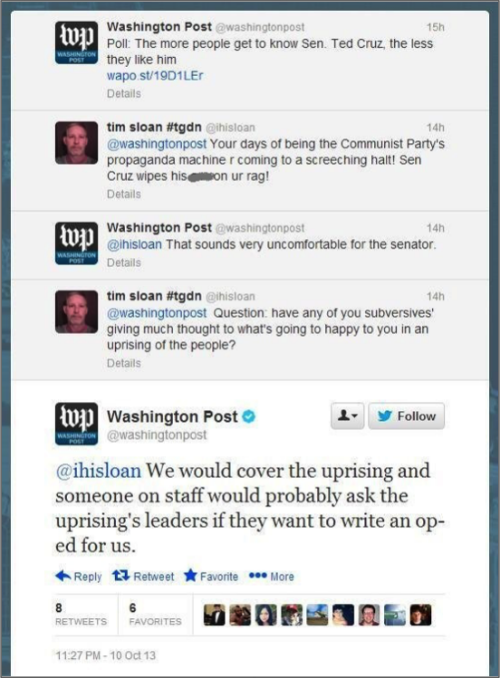 “I only need three things before I take up running: good shoes, a workout playlist, and a full frontal lobotomy.”

The rule of three is a classic structure for a joke. The first item in your list establishes a theme, the second leads the audience further into your theme, then the third has a subversion that provokes a response. “I only need one thing before I take up running: a full frontal lobotomy!” is a little bit funny, but the joke plays better once you have the audience engaged.

At TopRank Marketing, we have a rule of three for messaging. The first message attracts attention, the second fosters engagement, and the third inspires a conversion. If we went all in on the first message, far fewer people would be willing to make the journey with us. But once you attract and engage, you have earned the right to ask your reader to take action.

Nothing is more uncomfortable than watching a comedian who is desperate for the audience’s approval. They repeat the punchline, only louder. They say, “Is this an audience or an oil painting?” or “These are the jokes, folks.” If they manage to elicit a few chuckles, the audience is laughing at them, not with them. Great comedians have the confidence to let their act stand on its own merits, and know the audience well enough to change it up if a joke isn’t working.

Asking for audience approval is just as cringe-inducing on social media. If a post fails to get the level of engagement you were looking for, pointing out the lack of engagement comes across as desperate. It’s better to move on: analyze why the post failed, research your audience, and try a different approach. Your audience won’t like your brand because you beg them to; they will like your brand when you deliver content that resonates.

Good comedians know that comedy is more than standing up and telling jokes. If it were that easy, everyone would do it. In the same vein, social media marketers know there’s more to it than writing tweets and watching the engagement roll in. Both disciplines require practice, testing, and some innate skill. So let these comedic principles be the vermouth in your Facebook martini (callback), and you can make sure your audience stays entertained.

Need to up your social media marketing game? We’re happy to help.