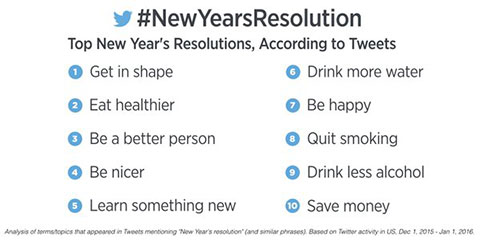 Top New Years Resolutions Of 2015 – The numbers are in and the people have spoken. People have been tweeting their New Years resolutions and Twitter has measured them with the hashtag #NewYearsResolution See the results above. Twitter

Amazon: Adoption Of Sponsored Products Ads Grew By 100 Percent in 2015 – Amazon released a flurry of performance stats for 2015 on Tuesday, including updates on just how popular sponsored product advertisements have become on the e-commerce platform. The company says global adoption of Sponsored Products grew by 100 percent among Amazon sellers in 2015. Marketing Land

Google Now Indexing HTTPS Pages By Default – We’d like to announce that we’re adjusting our indexing system to look for more HTTPS pages. Specifically, we’ll start crawling HTTPS equivalents of HTTP pages, even when the former are not linked to from any page. Google

Twitter Launches Conversational Ads To Get People Tweeting About Brands – Twitter’s new Conversational Ads mix polls with custom hashtags and rich media with the aim of getting users to share their responses with their own followers. Twitter

You Can Now Browse and Discover Events on Facebook – Facebook is launching one component of the improved feature with a way to browse events. Now you can search events by topic—but only if you have an iPhone, and if you’re in one of the 10 major U.S. cities included in this initial rollout. Wired

All Facebook Verified Pages Can Now Stream Live Video – Live-video-streaming feature Live for Facebook Mentions is no longer limited to Facebook Mentions, as the social network announced that the iOS feature has been extended to all verified pages. SocialTimes

Bing Now Powers AOL Search: What Advertisers Need To Know – The move is now official: Bing has taken over serving search results and ads for AOL from Google. Initially announced in June 2015, the 10-year deal affects all AOL search traffic worldwide and on all devices. Search Engine Land

Twitter Updates Rules To Fight Abuse and Protect Freedom Of Expression – As part of our continued efforts to combat abuse, we’re updating the Twitter Rules to clarify what we consider to be abusive behaviour and hateful conduct. The updated language emphasizes that Twitter will not tolerate behavior intended to harass, intimidate, or use fear to silence another user’s voice. Twitter

In response to 7 Ways to Optimize Your Web Content for Humans & Search Engines, Pj Zafra said, “Great content here. Posting with a purpose. Nothing beats organic traffic being driven to high quality content. 🙂 Thank you for sharing! Keep it up!”

John Hornbeck commented, “Thanks for a solid balanced approach to optimization that includes the human factor.”

And John Trader responded, “Great post Caitlin and thank you for the guidance and tips!”