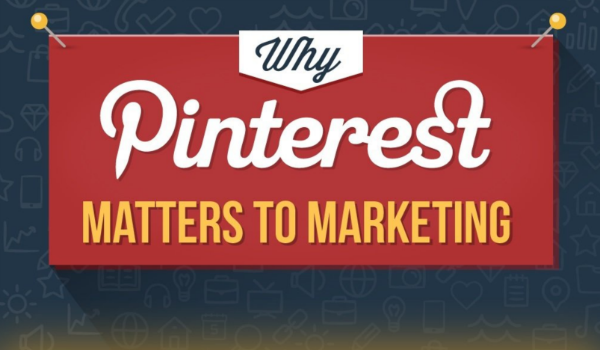 Why Pinterest Matters to Marketing [Infographic]
Did you know that Pinterest is the third most popular social network in the US, behind Facebook and Twitter? That statistic came as a surprise to me. But what isn’t surprising is the rise in brands that are using Pinterest as part of their social and content marketing strategy. While the platform is easy to use and visually appealing, there’s more to using the platform effectively than meets the eye. This infographic details the demographics of the Pinterest audience, the best time to post, and even what post categories work best on which days. WebpageFX

Google Removes Right Hand Sidebar Ads
Starting on February 19th, Google began phasing out sidebar ads from their search engine results pages. They will now show one to four ads before the organic search results, and the rest will be pushed to the bottom of the page. The update – which is described as “global and permanent” will only apply to desktop searches, which may affect the traffic you see from desktop devices. According to Search Engine Journal: “High volume and general search terms have been most severely affected by the update so far. Long-tail and niche terms will begin to see their right hand ads disappear in the coming weeks.” This change hasn’t yet rolled out to mobile, so it remains to be seen if/when that will happen and what the results will be. Search Engine Journal

Facebook’s Reactions are Here – Here’s How They’ll Change Your Approach to Facebook Marketing
If you’re like me, you went on Facebook earlier this week and noticed something odd — in addition to the Like button, there were options for reactions as well: Love, Haha, Wow, Sad and Angry. Pretty cool, right? These alleviate the commonly expressed concerns about Liking sad or negative statuses in an effort to show support, and also allow users to express other emotions, even if they aren’t ready or willing to leave a comment at the time. If you haven’t seen them yet, go ahead an log into Facebook and take them for a spin. I’ll wait. My only complaint is that we still don’t have a ‘Dislike’ button – but maybe that will make it through phase two. Social Media Today

Instagram Now Has More Advertisers Than Twitter
According to Marketing Land: “Seemingly as a result of all those moves, Instagram now claims more than 200,000 active advertisers as of February 2016, the Facebook-owned photo-and-video-sharing service announced on Wednesday. That number may pale in comparison to Instagram’s parent company — Facebook claims more than 2.5 million advertisers — but it trumps Twitter, which had more than 130,000 active advertisers as of the fourth quarter of 2015.” Although Instagram has probably had some serious help ramping up their advertising platform from their parent company, Facebook, it still says a lot about the direction online advertising seems to be taking. The ability to easily purchase ads from anywhere, and in formats that can contain links or extended video, makes a difference for online marketers. Marketing Land

Here’s Why You’re Failing By Ignoring LinkedIn As a Content Platform (Study)
According to a recent study from Wibbitz, more people (28% vs 24%) prefer reading their news online than seeing it on TV. This could have quite a bit to do with the variety of sources to choose from online compared to the relatively limited amount available on TV. That same study found that 67% of LinkedIn users polled considered themselves “news junkies”. So what does that mean for digital marketers? If you have relevant industry news or content, especially for those brands in the B2B sector, it makes sense to include LinkedIn in your content marketing strategy. Read more on SocialTimes.

Google To Shut Down Google Compare Products In US And UK On March 23
In a letter from Google to Compare partners, Google wrote: “Beginning on February 23, 2016, we will start ramping down the Google Compare product, which is currently live in both the US and UK. We plan to terminate the service as of March 23, 2016.” Google cites lack of success as their primary reason for shutting down the lead generation product that serviced the credit card, auto insurance, mortgage and travel insurance industries. Search Engine Land reported: “A Google spokesperson told Search Engine Land that while searches on these queries remained high, the product didn’t get the traction it hoped for and revenue was minimal.” The next step, according to Google, is a focus on transitioning these partners to standard AdWords products. Search Engine Land

Adobe Launches App Creation & Management Tool For Marketers
Adobe is hoping to make app creation and management easier for marketers, according to Marketing Land. The new Experience Manager Mobile app, launched as part of Marking Cloud, is meant to simply app creation and management, making it almost as easy to manage your mobile app(s) as it is to manage your website(s). With the rising popularity of mobile web and app use for shopping, consuming content, and myriad other activities, it’s not surprise that an organization like Adobe would come up with a way to make the lives of marketers a bit easier. But, my prediction is that as we’ve seen with ‘do it yourself’ website development tools, is that while you can certainly create apps on your own, but at some point you’ll need to harness the knowledge of someone who knows more about mobile development for it to be successful. But, only time will tell.  Marketing Land

Thanks for reading and have a great weekend! I’ll be back next week with more online marketing news. Have something to share? Tweet me at @Tiffani_Allen or send it to @toprank!