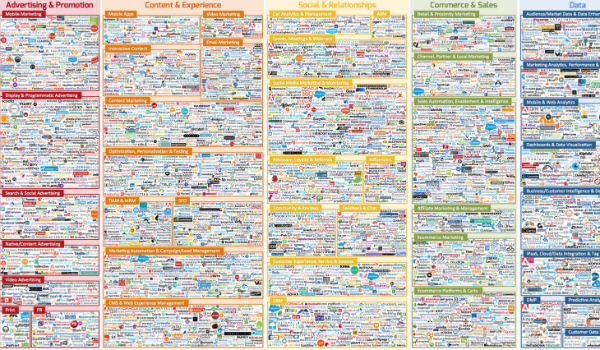 Marketing Technology Landscape Supergraphic
In one huge supergraphic, cheifmartec.com lays out key players in advertising and promotion, content and experience, social and relationships, commerce and sales, data, and management. As you can see from the image above, there are a huge amount of service providers in the industry, more than we may have even anticipated as few as five years ago. How will this landscape continue to change? Cheifmartec.com

Report: Google Building YouTube Connect to Compete With Periscope
Streaming live video is not a new concept in the marketing sphere, especially since Periscope hit the scene in 2014. But Video mega-star YouTube is jumping into the realm with both feet, launching their new live streaming app ‘YouTube Connect’ to compete with the success of Periscope and services like it. Interestingly enough, users will reportedly be able to watch live streaming video in the app itself, or on YouTube.com. SocialTimes

Google is completely redesigning AdWords: Offers first peek
Google recently announced that they’re revamping the look of AdWords — the first time since 2008. This change in design in rumored to make AdWords more intuitive and focused on the needs of the marketers using the platform, while making the look and feel more modern. Functionality won’t be changing, but there will be major changes to in-platform views and dashboards, along with the navigation. According to Google, they will begin rolling out changes as they become available. Search Engine Land

Research Shows Marketing Personalization Misses The Mark
Don’t freak out — marketing personalization is still and important and useful tool in our collective toolbox. However, the way it’s being used isn’t as effective. Repeating the same bad behaviors that didn’t work before personalization capabilities, but trying to fit them into a new paradigm, will get you the same results. According to Forbes, “What they are really doing is putting lipstick on tired, transactional emails and blasting them from the latest and greatest CRM technology.” The takeaway here is that if you’re going to use personalization (and you should!) make sure you’re using it in the right way, and avoid spray and pray! Forbes

Facebook Reactions: New Data Shows Most Users Still Just ‘Like’ Posts
After all the excitement and nail biting or Facebook’s release of reactions, new data is showing that 93% of users are still simply liking brand posts. This could be due to the small increase in time it takes to hover over the like button to choose a reaction, or that Facebook is possibly not showing the full picture in terms of itemizing the total ‘likes’ number down to specific reactions over 10,000. What we do know is that reactions are likely here to stay — so it’s worth incorporating their use into your social marketing strategy. SocialTimes

Snapchat is testing ads that contain advertorials like listicles
According to Marketing Land, “A couple of months after Snapchat rolled out its first app-install ads, the app has begun testing a new type of interactive ad that lets brands append branded articles to Snapchat’s standard vertical video (or 3V) ad format, a Snapchat spokesperson confirmed.” This means that advertisers can promote their content in a more interactive ad format, using text, images and animated gifs in a similar style to what you’d expect to see on Buzzfeed or Mashable. Marketing Land

What were your top marketing news stories this week?

Stay tuned to the TopRank Marketing blog for next week’s news roundup (and delightful video from yours truly and the lovely Josh Nite)! Have something to share? Tweet me @Tiffani_Allen or send it to @toprank using the hashtag #trnews!