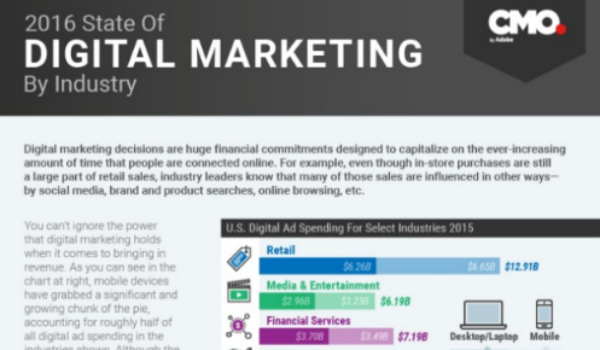 CMO.com’s 2016 State Of Digital Marketing, By Industry [Infographic]
In a new infographic from CMO.com, digital marketing spend and other statistics are broken down by industry, including retail, financial services, media and entertainment, travel and hospitality, and high tech. Not surprisingly, retail takes the cake with the biggest spend, followed by financial services. CMO.com

Twitter to Stop Counting Photos and Links in 140-Character Limit
Social media marketers have been abuzz this week with a reported change to the way Twitter will be handling character counts — links and images are rumored to soon be excluded from character counts. This change could mean even more engaging content on Twitter, without the stress of being confined to 92 characters. Everybody wins! Bloomberg Technology

85 percent of Facebook video is watched without sound
Media publishers are reporting that 85% of their video content is being consumed on Facebook without the sound turned on. What does this mean for marketers and publishers? Content that’s engaging visually without the need to hear what is going on will be your best bet on the platform. Many publishers use captions or other forms of text to tell a story within the video, while others simply create video that doesn’t need descriptive cues. For video creaters who don’t design with a Facebook-first mind set, this could pose challenges in need of a more creative solution. Digiday

Google Ads Now Being Shown in Image Search
Google is reportedly testing adding ads to their image search platform, starting with Google Shopping ads. Image searchers reportedly are curious about the price of some of the items they see in their search results and want to know where they can buy the item pictured. This could potentially open a up a whole new world of advertising opportunities for retailers. Search Engine Journal reports: “The new Product Listing Ads for image search are now officially rolling out. With Image Search being part of the Google Display Network, your PLAs will be automatically eligible to be displayed in image search results, provided your shopping campaign is opted in to Search partners.” Search Engine Journal

Twitter Beta-Testing Way to Attach Ads to Tweets in Third-Party Apps
According to SocialTimes, Twitter’s “senior product manager Mollie Vandor announced […] that the social network is beta-testing a way for brands to display ads from its MoPub ad-serving solution directly via Twitter Kit timelines for Android and iOS applications. Vandor added that all ad rendering is handled automatically, and ads match the themes and color preferences in Twitter Kit so they will display properly within apps.” This could be a huge win for Twitter’s advertising platform and those who use it for their marketing campaigns. SocialTimes

Instagram’s new analytics give detailed insights
For marketers who have been dying to measure the effectiveness of their Instagram posts, there’s a glimmer of hope ahead — Instagram is now testing detailed analytics! Marketing Land reports the new insights will include: Follower data, including “age distribution, geographic distribution, gender distribution and follower activity by hour, among other data,” and all images posted within seven or 30 days displaying in order of impressions in Top Posts. Marketing Land

Google launches their new mobile-friendly testing tool
According to Search Engine Land, “Google announced they’ve launched their new mobile-friendly testing tool at search.google.com/search-console/mobile-friendly.” The tool, which was last updated at the end of 2014, has been updated with a more sleek look, matching what you’d typically expect to see from a Google property. This will reportedly also leave more room for Google to improve the tool’s functionality over time. Search Engine Land

Stop by next week for more weekly news, super videos, and possibly some funny jokes. Have something to share? Tweet me at @Tiffani_Allen or @toprank!