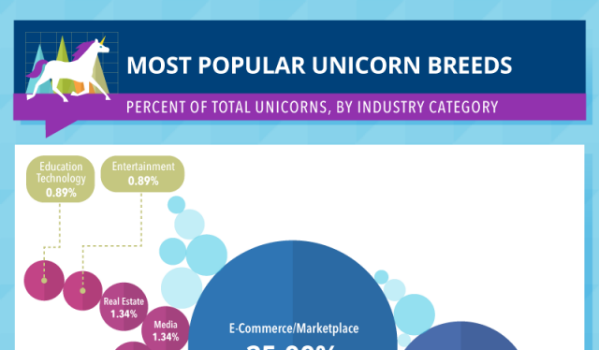 How Snapchat Became a Social Media Unicorn (Infographics)
Unfortunately, SocialTimes isn’t referring to the mythical, fuzzy, four-legged cuddle stallions we’ve come to know and love. “In the tech world, unicorns are private startups that reach at least a $1 billion valuation. E-commerce has the most unicorns, with 25 percent of the total pool, while 18 percent are in internet software and services and just 5 percent are in social media. No social media unicorn seems to get more attention than Snapchat, which was recently valued at $16 billion.” It would appear unicorns are more common than we were led to believe. SocialTimes

Official: Instagram adds business profiles, will tell brands how many times their organic posts are shown
Instagram has finally made it official – businesses can now have business profiles on the platform. Those profiles come with the benefits you’d expect in terms of tracking. Business pages will be able to track impressions (not views, as the Marketing Land was sure to emphasise) and understand the breakdown of their follower base according to age, gender and location. Marketing Land

Periscope Now Lets Users Moderate Comments During Broadcasts
Periscope has announced that users are now able to flag comments as abuse or spam during broadcasts. The popular live streaming service is allowing this moderation in true American fashion – by popular vote. Once a comment is flagged as abuse or spam, the application surveys a random selection of viewers for their vote – is this comment truly inappropriate? This could be a big turning point for moderation on social media, live-streaming in particular, effectively shortening the review time for flagged content. As Periscope commented: “There are no silver bullets, but we’re committed to developing tools to keep Periscope a safe and open place for people to connect in real-time.” SocialTimes

Google says page speed ranking factor to use mobile page speed for mobile sites in upcoming months
Staying true to form in the commitment to mobile-friendliness, Google is planning to take mobile page speed into account when determining mobile rankings. In the last few years, Google has made leaps and bounds to ensure that sites that promote a good user experience on mobile are easy to find on mobile search, and benefit from that elevated search status. For web developers, this means that designing for mobile isn’t only important for rankings now, but it will be even more so in the months to come. Search Engine Land

Facebook Pages Paid for 31.68% of Total Reach in April (Report)
According to SocialTimes, “social analytics and reporting firm Locowise found that 43.28 percent of the 5,000 Facebook pages it studied in April used Facebook advertising, which accounted for 31.68 percent of their total reach.” This validates the all-too-well known mantra repeated by digital marketers everywhere — Facebook is increasingly becoming pay to play. The report also found that organic posts were only reaching, on average, 10.71 percent of a page’s total audience — down over six percent from March to April alone despite reported overall increases in organic reach. SocialTimes

Snapchat’s redesigning Discover to make it more like a newsstand
Who doesn’t love a good, old fashioned newsstand? Browsing the racks of shiny covers and pretty images, picking out the latest news, gossip or entertainment for your reading pleasure was once America’s favorite way to consume content. Snapchat is picking up on that intrinsic desire to browse by switching up their ‘Discover’ feature to be more like a newsstand. Will this mean more content impressions and engagements for publishers? If so, we can expect to see even more exciting content coming from the app’s top publishing partners. Digiday

Snapchat Has Reportedly Surpassed Twitter in Daily Users by Reaching 150 Million
After four years, it has finally happened — Snapchat has surpassed Twitter’s daily users, according to a Bloomberg story. AdWeek also added some additional information, saying “Snapchat has grown 50 percent year-over-year in daily users, up from 100 million at this time in 2015.” With the new developments we’re seeing out of the app, coupled with the stagnant growth Twitter is reporting, it’s reasonable to assume that the social landscape could be seeing some big changes in the year to come in terms of market leaders and marketing strategy. AdWeek

Stay tuned, next week I’ll have more entertaining marketing news for your enjoyment and, of course, lovely video commentary featuring the talented Mr. Josh Nite. Have something to share? Tweet me @Tiffani_Allen or @toprank!