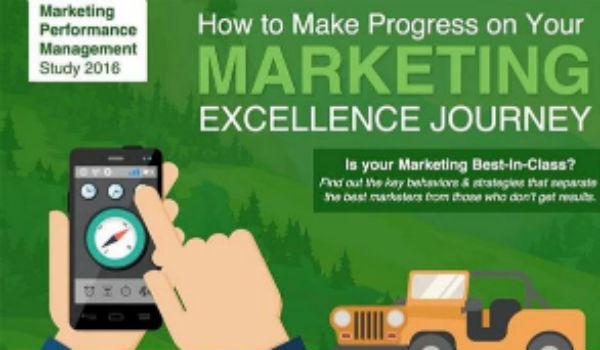 How to Make Progress on Your Marketing Excellence Journey [Infographic]
Successful marketing comes down to a simple concept: Being able to measure what people want, and being able to deliver it. This inforgraphic shows how to make progress toward successful marketing. According to MarketingProfs, “the hard lesson here is that marketing organizations that want to earn or keep their seat at the corporate leadership table must focus on both sides of the analytics coin: data and metrics.” MarketingProfs

YouTube Releases New ‘YouTube Director’ App to Help Businesses Create Better Video Content
YouTube has released a new app that aims to help advertisers create better video. It reportedly guides users through the video creation process with templates and step by step instructions. For those advertisers who spend over $150 and are located in one of four major metropolitan areas, they’re offering on-site assistance from a professional videographer. Since Facebook has reportedly posited that all content will be video content in the near future, this could mark a turning point for digital content creators. Social Media Today

Twitter Now Lets Advertisers Target Users Who Tweet Emojis
Today is World Emoji Day! To honor this very important holiday, Twitter is now allowing advertisers to target users based on which emojis they’ve tweeted, or which emojis are in the Tweets with which they interact. Brands who sell a certain product with a correlated emoji, like Chipotle and Burritos, for example, can target users that are using the emoji (anyone hungry for a burrito?). This has big implications for brands, as our modern lingo is so emoji laden — this could do wonders for sentiment analysis, real-time marketing, and even helping brands find new audiences that are interested in their offerings. AdWeek

Facebook Creates Online Creative Hub in Bid to Simplify Creation of Ads
Facebook announced the creation of their online creative hub to help make the creation of Facebook ads a more simple, collaborative process. They’re calling it an online space to foster collaboration, where advertisers can work together sharing, reviewing, testing and creating ads on the platform. AdAge

73% of Ad Players Cite User Experience as a Major Industry Challenge
AdWeek reported that “the Interactive Advertising Bureau, Kargo and Refinery29 surveyed 283 marketers and media agency executives last month and found that nearly three-quarters (73%) of them believe that user experience needs improvement in digital marketing.” This experience needs to be improved to ward off the oncoming prevalence of ad blocking software — one of many signs that the people consuming digital content aren’t enjoying the ads they’re served. AdWeek

Google search analytics report adds the ability to compare queries
This week, Google quietly launched a feature in the Google Search Console analytics report that allows users to compare two search queries to each other. According to Search Engine Land, users are only allowed to compare two queries at one time, but these comparisons could prove to be invaluable to search engine marketers along with content developers. Search Engine Land

Survey: Pre-roll ads are a major barrier to watching online news videos
According to Marketing Land: “In a new international survey of web users, less than 25 percent say they watch online news video content in a typical week. Pre-roll ads are a major reason why.” In fact, 35% of online news consumers avoid video news specifically because of not liking pre-roll ads. That same survey showed that online news consumers prefer text-based news by a fairly wide margin, which they described as faster and easier to consume. Marketing Land

I’ll be back next week with more marketing news, a special video guest star, and the usual hilarity and hullabaloo. Have something to add? Tweet me @Tiffani_Allen or @TopRank!