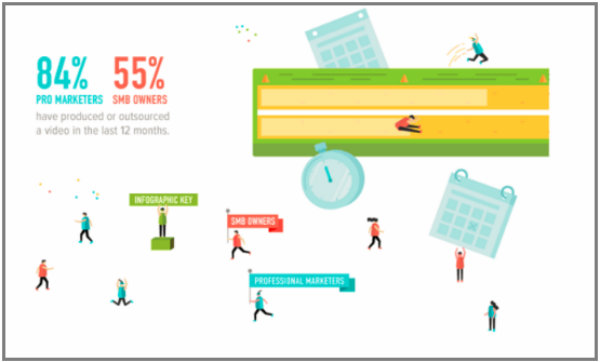 The smart and talented Tiffani Allen will return for next week’s roundup. While we wait, let’s dive into what’s been happening in the news this week.

The Future of Social Video: A Brief Look into What’s Next [Infographic]
Video. Is there anything it can’t do? First it kills the radio star, and now it’s taking over social media. According to research from Adobe, over half of marketers say video content has the best ROI. If you’re feeling left behind, don’t worry: one out of four marketers and small business owners feel they’re not up to speed on video marketing. Check out the full infographic for a breakdown of video marketing by social media platform. Hubspot

Instagram Takes a Page from Snapchat, and Takes Aim at It, Too
If your only problem with Instagram is that it isn’t Snapchat, rejoice! Instagram just introduced a new feature called Stories, collections of photos and videos (with added enhancements like stickers and drawing functionality) that, once published, will disappear after 24 hours. Sound familiar? Facebook-owned Instagram is clearly taking a shot at the platform’s biggest rival. Do the kids these days need two disappearing-picture platforms? Time will tell. New York Times

Your LinkedIn Feed Is Coming to Life with Videos from LinkedIn Influencers
LinkedIn may be late to the native video party, but they’re coming at it from an intriguing new angle. They’re not launching the product to the whole subscriber base and waiting to see what people do with it. Only a select few LinkedIn Influencers will have access to native video (at least for now), and they will be using it for a specific purpose. Influencers will be posting 30-second videos answering questions from their followers, via an app that collects questions and does the recording. LinkedIn

Facebook is Testing Mid-roll Video Ads in Facebook Live
We knew it was coming: Facebook has settled on a way to monetize their live streams. Instead of pre-roll ads, though, they’re focused on adding 15-second ads mid-stream, when already-invested viewers will be less likely to bail. The wrinkle right now is none of the ad money goes to the content producer. Facebook pockets all the loot, although they do pay popular livestreamers directly for their content. AdvertisingAge

Twitter Awards to Highlight Top Marketing Efforts
If your brand has been sufficiently rocking it on Twitter, you might want to submit your campaign for the first annual #TwitterAwards. Categories include #Live, #Impact, #Creativity, #Scale, #Customer, and #Growth. Twitter’s VP of Global Brand and Creative Strategy says winners “may receive a coveted award perfect for mantels or glass cases.” Then again, they may not. #IGuessWeWillWaitAndSee. SocialTimes

Does the IAB’s First Ad-Blocking Study Provide “The Missing Stat?”
The one thing most marketers want to know about ad blockers is, “what can we do to make people not use them?” This study from the Interactive Advertising Bureau (IAB) may be able to answer that question. In their study, 20% of participants used to have ad blockers but turned them off, either because the publisher asked them to in order to view content, or because the ad blocker itself blocked content they wanted to see. Marketing Land

Snapchat Launches ‘Geostickers’ for More Location-Activated Customization
In surprising news, Snapchat did not announce a new Instagram clone this week. Instead, they added new stickers that can only be used in a certain location, much like their popular Geofilters. The catch for users is they must have location enabled on their phones to use the new features, which will make it easier to serve relevant, location-based ads in the future. Social Media Today

What marketing news stories caught your attention this week?

Tiffani will be back next week with more marketing news. Have something to share? Tweet her @Tiffani_Allen, or tell the whole team @toprank.