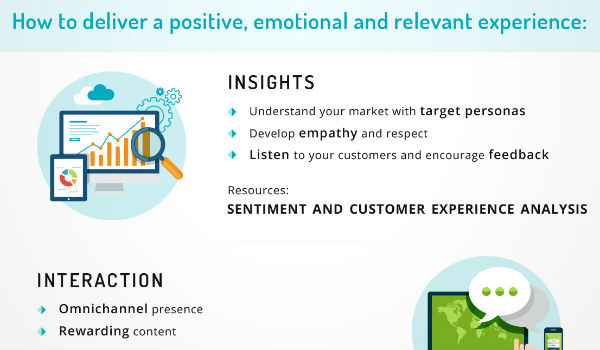 How Emotional Connection Increases Customer Satisfaction [Infographic]
Did you know that customers with a higher degree of emotional connection have a higher lifetime value than those that aren’t? And 50% of a person’s perception of an experience is based on emotions? This infographic and supporting statistics help to illustrate the need for marketing messages that truly resonate with your market. ClickZ

Marketers Rejoice: Twitter No Longer Counts Photos, GIFs, Videos Toward 140-Character Limit
It’s official as of Monday, September 19th — Twitter is no longer counting images, gifs, or videos in their 140 character count. This is a big break for social marketers. What’s next for the platform? Eliminating @handles from the character count as well. This change is slowly rolling out to all users but isn’t official platform wide. AdWeek

Google, Facebook, IAB & major brands form Coalition for Better Ads
The consumers have spoken via ad blockers — they don’t want to deal with irrelevant content in ads. To create the standards for good advertising, companies like Google, Facebook, Unilever and more joined forces with the IAB, the 4As and others to form The Coalition for Better Ads. Their top tasks are to create data-driven, consumer based ad standards, deploy technology to implement those standards and encourage awareness and adoption. Marketing Land

Email Open Rates on Mobile Devices by Industry, 2Q16
58% of marketing emails were opened on mobile devices (45% smartphones, 13% tablets) in Q2 of 2016. That’s a 14% increase from the previous year. However, even though only 42% of emails were opened on desktop, desktop-opened emails accounted for 49% of email-generated revenue. MarketingProfs

Instagram Officially Rolling Out Save Draft Feature
There is more great news this week for social media marketers — Instagram is now allowing users to save drafts of their posts when they aren’t quite ready to click the go button. Users can save drafts by clicking the back arrow at the top left of their screen during the filtering and editing steps and selecting ‘save draft’ at the bottom of their screen. SocialTimes

YouTube Gets Its Own Social Network with the Launch of YouTube Community
TechCrunch reports: YouTube announced “the launch of YouTube Community, which allows video creators to better engage viewers using text, GIFs, images and more. The goal with the new features is to help keep creators from departing to competing platforms by offering more tools for connecting with their audience, beyond the videos themselves.” TechCrunch

Everything you need to know about Google’s ‘Possum’ algorithm update
Google has made recent updates that have the SEO community on high alert. Search Engine Land reports: “All the evidence seems to indicate this particular update only impacted ranking in the 3-pack and Local Finder (AKA the local results or Google Maps results). There is talk of another update that happened right after, which impacted organic results.” Search Engine Land

Brands have started using Twitter’s latest customer service tools
Many brands are no stranger to using social media, Twitter in particular, for providing customer service. Recently Twitter has released a new feature, already being used by brands like Delta and T-Mobile, that tells users by a showing users a “Provides Support” button that they can click or tap to start a conversation. Digiday

I’ll be back next week with more online marketing news. Can’t wait a whole week? Follow @toprank to get your news fix early.