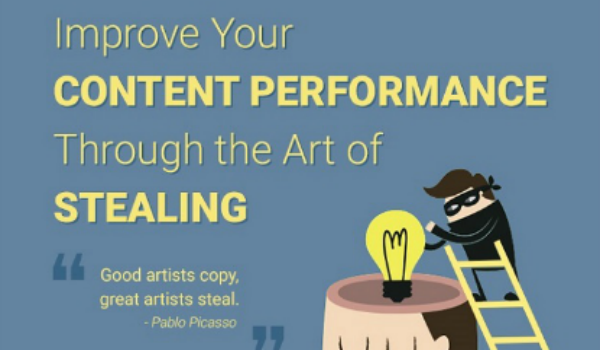 How to Improve Blog Writing Through the Art of ‘Stealing’ [Infographic]
Imitation is the sincerest form of flattery, or at least that’s the rumor. So, how can you (legally and ethically) ‘steal’ the high-performance content mojo from a fellow writer to help improve your work? This infographic explains how. MarketingProfs

Important News about Vine
Twitter announced on Thursday that they’ll be discontinuing their Vine app. The platform, which just announced a round of layoffs last week, says they’ll be ‘doing this the right way’ by keeping the website online so users can continue to access their content. Vine on Medium

4 chatbots to help you analyze ad campaigns right in Slack, Facebook Messenger & Google Sheets
The life of a digital marketer is always on the move — from platform and algorithm changes to juggling multiple campaigns at once. The good news? There are now chat bots inside frequently used apps like Slack, Google Sheets and Facebook Messenger that can give you the insights you need, right when you need them. Marketing Land

Facebook Launches a Big Ad Campaign for Facebook Live, With User Videos at the Core
Facebook Live, for how powerful it is, is still relatively unknown by the Facebook user community at large. This week, Facebook launched an international campaign to gain awareness, featuring a combination of TV ads and digital billboard creative using footage of actual user videos. AdWeek

Blogging Report: How to Drive Results From Your Company’s Blog
“A new report reveals that when blogging for business, companies are producing more content with less impact. It also uncovers specific tactics marketers can use to combat content overload and outperform their competitors,” Reports TrackMaven. The average number of posts published by brands has increased by over 800% in the last five years, while shares have gone down. TrackMaven

New Occurrences of SEO Spam Discovered: Hacked Subdirectories on WordPress Sites
Sucuri released a statement this week about new occurrences of SEO spam which are secretly installing subdirectories on WordPress sites. Search Engine Journal reports: “The idea behind this black hat scheme is to abuse the server resources and storage by installing spammy sites within a WordPress subdirectory.”  Search Engine Journal

Client-side ranking to more efficiently show people stories in feed
Facebook announced in a blog post last week, “we redesigned the architecture of News Feed to allow stories to be re-ranked on the client after being sent from the server. We avoid spinners and grey boxes by 1) requiring stories to have all necessary media available before rendering them in News Feed and 2) being able to optimize the content in News Feed for each session.” Facebook

What were your top online news stories this week?

We’ll be back next week with more online marketing news. Have something to share? I’d love to hear it! Drop a note in the comments or tweet your thoughts to @toprank.