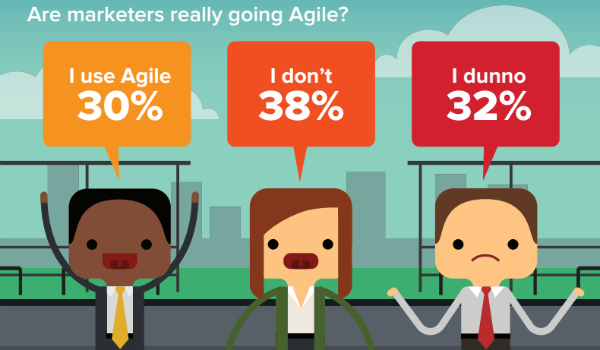 Marketers Are Clueless About Agile [Infographic]
Only 40% of marketers are using or planning to use agile task management systems in the next four years, while 40% aren’t sure. This isn’t a super surprising statistic, given that more than 20% of marketers don’t know what agile means. This infographic shows details of what task management systems marketers are using, their future plans for agile and more. Workfront

Facebook Testing ‘Send a Wave’ Feature Within Nearby Friends
Just when we thought the poke had retired, it comes back in the form of a wave. Users can now send a waving hand emoji to their nearby friends to help facilitate a meet up. The question here is when this feature will be available for business on a local level. Time will tell. SocialTimes

Digital Share of New Ad Dollars to Reach 77% Next Year, GroupM Forecasts
In the last few weeks, there have been forecasts predicting, and reports confirming, that digital ad spend continues to drive growth in total ad spend into 2017. In fact, digital captured 72 cents of every ad dollar this year, and may get as many as 77 cents to the dollar next year. Ad Age

Google replaces ‘In the News’ box with ‘Top Stories’ on desktop
Search Engine Land Reports: “Google has confirmed that they have dropped the “In the News” box with the “Top Stories” box. This change seems to just be an aesthetic update to the design in order to make the news box on desktop match that on the mobile version.” As far as we know, this is just an aesthetic change, and not an algorithmic change. Search Engine Land

Beware: New Types of Referral Spam & How to Filter Them Out
A new ‘language’ in the language section of Google Analtyics is popping up and causing spam concerns: “Secret.?oogle.com You are invited! Enter only with this ticket URL. Copy it. Vote for Trump!” This, coupled with an alternative kind of spam that makes spammy traffic look as though it’s coming from reputable sites like Reddit and Lifehacker, have webmasters scratching their heads. This post shows how to filter out that spam. Search Engine Journal

The State of Social Media in 2016: Platform and Usage Trends
According to recent research from Pew Research Center, Facebook is still the most popular network with U.S. adults. 68% of all U.S. adults use Facebook, while 28% use Instagram, 26% use Pinterest, 25% use LinkedIn and 21% use Twitter. MarketingProfs

Instagram Adds New Community Safety Tools, Including the Ability to Switch off Comments
Instagram has announced a new set of tools with a goal of helping make Instagram “a welcoming place for everyone.” These features include comment control, allowing users to turn comments off on their posts, comment liking, and the ability to remove followers from private accounts. Social Media Today