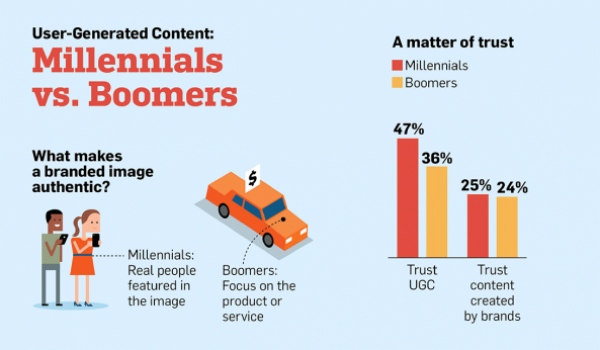 How Millennials and Baby Boomers Consume User-Generated Content [Infographic]
47% of millennials trust user-generated content, vs. 36% of their baby boomer counterparts. However, each generation shared a relative distrust of content created by brands. This infographic shows the generation gap of UGC. HubSpot

Survey: 60 percent of voice users want more answers and fewer search results
People who use voice search — the majority of whom prefer to do so in private vs. public — use it because it’s fast, doesn’t require reading, and gives you fewer answers to sort through. What does voice search mean for the future of search marketing? Search Engine Land

What Content Creators Need to Know About Twitter Relaunching Vine as Vine Camera
On January 18th, Twitter officially shut down Vine. In its place, Twitter launched Vine Camera, an app that can be used in place of Vine with similar features that works with Twitter. Good news — Vine users can still access their videos from Vine, but the comments and likes will be gone. AdWeek

Will Artificial Intelligence Have a Major Impact on B2B Marketing?
Some 80% of B2B marketing executives say AI will have a significant impact on their marketing efforts in the next five years, but most admit that they do not have a firm understanding of artificial intelligence technology. MarketingProfs

Publishers see short-form video views on Facebook cut in half
Digiday reports: Publishers are finding short-form video viewing figures on Facebook have plummeted as more content creators battle for space in the news feed. Over six months ago a well-performing video from The Sun would fetch 250,000 views; now it’s lucky to get over 100,000.” Digiday

We’ll be back next week with more online marketing news. Have something to share? Sound off in the comments or Tweet to @toprank.