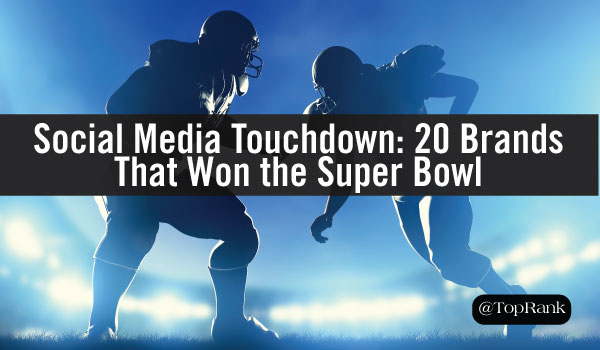 Yesterday was a huge day for sports fans and brands across the nation. Diehard football fans wait all year for this special game and hope that their team (or at least a team they support) hits the turf for the big game.

Let me preface my next statement by saying I mean absolutely no offense to the amazing athletes that played their hearts out yesterday. But if you’re like me, the day is really about the cheesy/gooey/delicious food, the Puppy Bowl and of course, the ads.

On this day, brands hope that their creative and entertaining ads will reach an engaged and attentive audience as they’re glued to the television. In fact, the average commercial costs approximately $5 Million for a mere 30 seconds of airtime during the Super Bowl. That is some serious cheddar!

While some companies choose to invest in airtime, others choose to spend efforts on another channel with an engaged audience, social media. Some great brand creative, an attentive community manager and some budget to boost posts is a great way to catch the attention of consumers glued to a 2nd and 3rd screen.

Below are examples of brands that capitalized on a great opportunity to be social and share some great content during the 2017 Super Bowl.

Each year during the Super Bowl there are a handful of brands whose message gives you all the feels and this year was no exception.

Here’s to the #PowerOfDreams and the amazing things it has led to, like the all-new 2017 CR-V. pic.twitter.com/sfNNwJPnxn

This is the story of our founder, and his pursuit of the American Dream. #ThisBudsForYou

On a day where an enormous amount of social content is being created by brands and consumers alike, these companies stood out by taking a clever and creative approach to their message.

Houston, we got a message from 250 miles above in the @Space_Station. #SB51 pic.twitter.com/Gac3kZ8LBt

Loving the @Gatorade lens on @Snapchat today! Last years filter gained more impressions than the # of people who saw the #SuperBowl pic.twitter.com/tWb6YeZE2O

There’s still time! Hussle into your nearby PetSmart to shop licensed NFL apparel so your entire family is Super Bowl LI-ready. And… break!! #SBLI http://ptsmrt.co/60038TJqT

There is no I in guac. pic.twitter.com/i5bMh7l8QS

Food is the most important part of today. Don’t fumble. Get the recipe, on our blog (link in bio). #biggame #food

Kudos to the content teams, social teams and community managers for the following brands. Events like the Super Bowl create the perfect opportunity to respond quickly.

.@SnoopDogg We’re not sure we know what you’re referring to here, Snoop… #HitTheButton

Although I didn’t see as many social contests today as I had expected, these two brands garnered a lot of engagement from their various posts promoting live social contests during the Super Bowl.

The brands in this category had some of the most entertaining and funny content during Super Bowl Sunday.

Humpty’s right: you can file your taxes anytime, anywhere. Like on your couch, right before watching the Big Game…you get the idea. ?

The opening video featuring Rob Riggle and other celebrity guests was probably one of the funniest moments of the Super Bowl. If you didn’t get a chance to see it live, I’ve included the video below.

For two teams the #SuperBowl is everything. The other 30 “Lowly Teams” are waiting & wishing. @RobRiggle explains. #RigglesPicks pic.twitter.com/Hva3ojVhuS

While it’s clear that some of these brands invested big bucks in content for Super Bowl 51, others simply jumped on the opportunity to showcase some clever content. A special thank you to members of the Social Media Masterminds group on Facebook for helping me uncover some great Super Bowl content!

These 20 examples showcase only a fraction of the brands that created and promoted great content during Sunday’s game. Please share your favorites below!