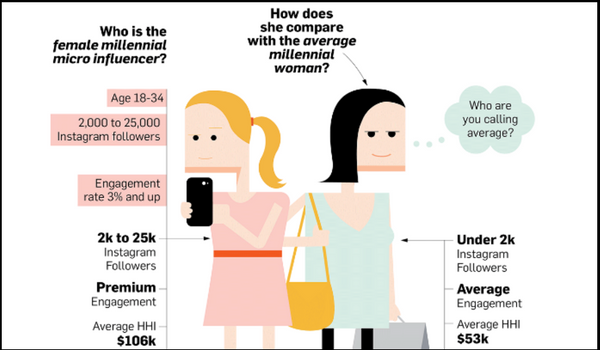 Infographic: Who Is the Millennial Female Micro Influencer?
Who is a millennial female micro influencer? How does she compare to your average social media user? She tends to have a larger following with more engagement, and posts about topics like travel, fashion and health and fitness. This infographic sums up who this person is and what her followers and habits are like. AdWeek

Apple introduces Clips: the fun, new way to create expressive videos on iOS
This week, Apple introduced Clips — a new way to create expressive videos out of music, photos, video clips and more. These Clips also feature interactive titles that are based on your voice, and are easily posted directly to Facebook, Instagram, YouTube, Vimeo or a variety of other platforms. Apple

New: Save Your Live Video to Your Phone
Late last week, Instagram announced the newest addition to its live videos – users can now save their live videos directly to their devices. However, these saved videos will not retain comments, number of views or interaction data. Instagram

New: LinkedIn’s Matched Audiences will target ads based on people’s web browsing, email addresses
According to Marketing Land, “Later this year LinkedIn will once again let businesses target the people who visit their websites with ads on the Microsoft-owned, business-centric social network. On top of re-adding website retargeting — which is already offered by Facebook, Google, Twitter and Pinterest — LinkedIn will also enable business to target ads based on people’s email addresses, as its aforementioned rivals already do.” Marketing Land

Google Admits Brand Safety Is a Global Problem
Prompted by recent events in the UK, where a media group paused all of its clients’ display spending due to ads appearing next to questionable and/or unsafe content through Google’s ad network, Google is reevaluating their practices around unsafe advertising. However, advertisers must also call themselves into account and ensure they understand where and how their ads are being placed. For brands to maintain safety, everyone needs to be watching. Ad Age

I’ll be back next week with more online marketing news. If you have something to share, sound off in the comments or Tweet to @toprank.