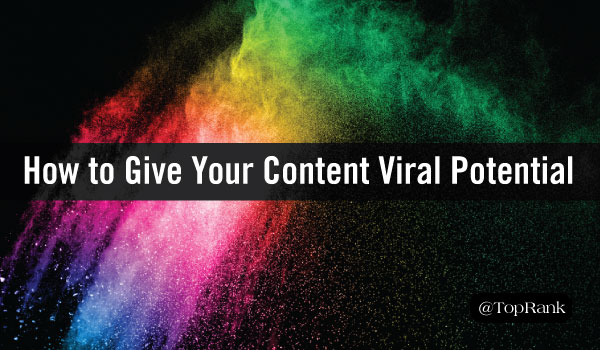 For some marketers, going viral is the holy grail of content marketing. It’s easy to see why. You put out content, people organically start sharing it, and it takes off until you’ve racked up millions of views. Millions of brand impressions without a penny in paid promotion. You can’t blame marketers for chasing that particular dragon.

That said, it’s important to get one thing straight: “Going viral” is not a content marketing strategy. It’s a pleasant side effect that can happen with well-crafted content, yes. But the chance of virality is no substitute for well-researched, relevant content amplified to the most relevant audience through organic, paid, and influencer channels.

If you’re planning on going viral to get your content seen, you’re playing the lottery instead of investing in your brand’s future.

However, by happy coincidence, the attributes that give your content viral potential are also hallmarks of great content. Creating shareworthy content as part of your overall strategy is a great idea, whether or not you hit the viral jackpot.

Here are six ways to create great content that just might go viral, complete with examples to inspire you.

The average person today has more data available to them than anyone has at any other point in history. It’s an ocean of facts, figures, and statistics, and most of us are drowning instead of surfing. If you can take information that’s relevant to a large audience and display it in a beautiful, functional form, you have a good chance at racking up the shares.

This example is from an individual rather than a brand, but it’s too good to leave out. Redditor Andrew Elliot tracked his newborn infant’s sleep patterns for the first four months of her life, then charted the data in a unique circular format. The circle represents a 24-hour clock, with midnight at the top and noon at the bottom. A spiraling line tracks the infant’s sleeping and waking cycles, blue for sleep and orange for awake, starting in the center. Each complete revolution represents a single day. 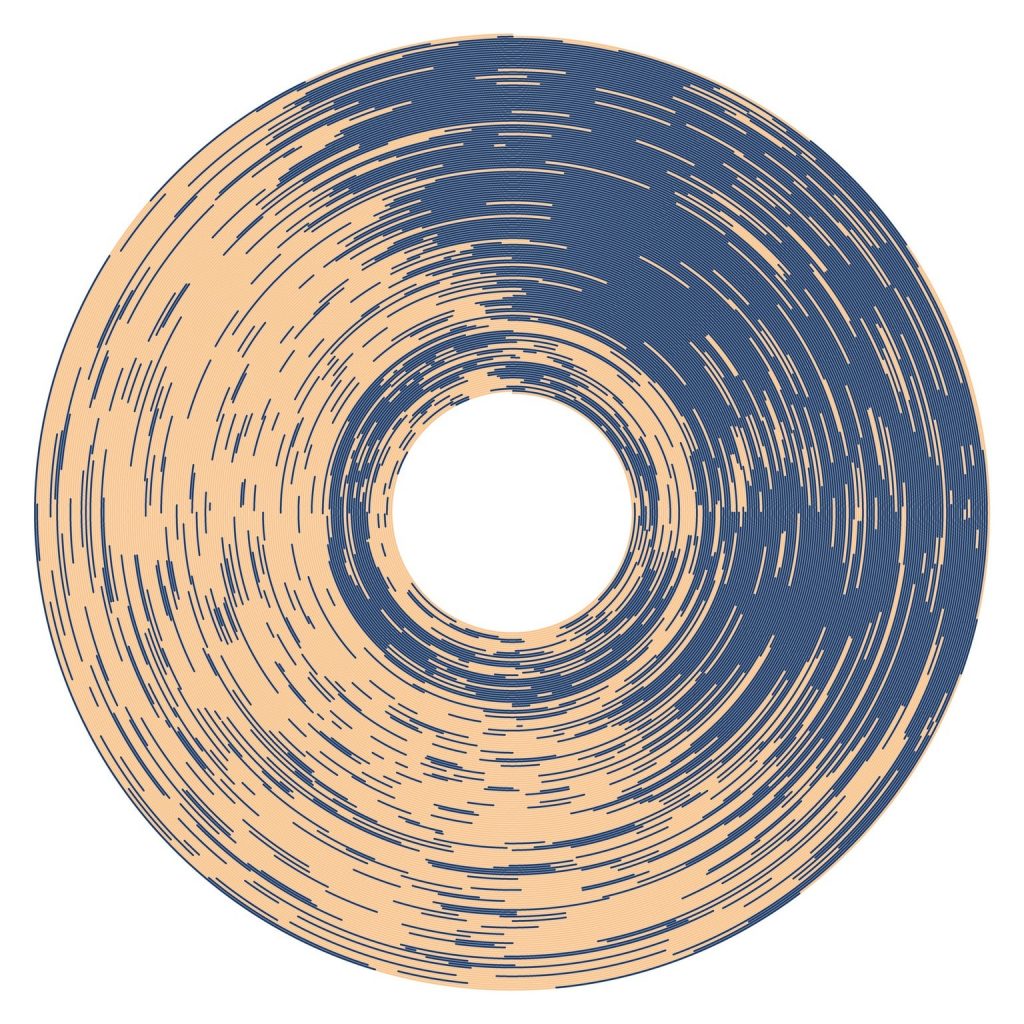 At a glance, you can see how the early days are chaotic, but by the latter revolutions, the daytime hours are mostly awake and nighttime is mostly asleep. Andrew’s data visualization hit the front page on Reddit, and is still the top rated post in /r/informationisbeautiful, with over 51,000 upvotes.

For a more commercial example, project management software company Podio converted a blog post into an interactive visualization of how famous creative types spent their days.

Not only is the graphic beautiful and informative (and the interactivity is top-notch), it’s relevant to Podio’s potential audience. They help people organize time to be more productive, so someone with an interest in how famous creatives managed their time might also be interested in their solution.

Podio’s nifty visualization picked up over 45,000 shares on Facebook.

A recent survey of over 1,000 consumers sought to discover what makes people form an emotional connection with a brand. The top two reasons people connected with a brand were:

If we want to make an emotional connection with our audience—and who doesn’t—it’s important to think beyond the product-pain point interaction. Content that takes a stand on an important issue covers both of the two reasons above, and definitely has viral potential.

In 2015, sporting goods retailer REI created a viral marketing campaign by doing something truly unexpected: Closing its doors on the busiest retail day of the year. The brand announced that its stores would stay closed on Black Friday. Then they introduced the #optoutside campaign to encourage people to enjoy the great outdoors the day after Thanksgiving, instead of trampling people to buy a flat-screen TV.

It was a bold decision, not without backlash, and missing the day’s revenue was definitely a sacrifice for the chain. But the campaign went viral, with thousands trading the hashtag and signing up for the #optoutside movement on REI’s microsite.

REI’s stand resonated with their target audience and caught a wave of popular sentiment. The campaign is still going strong two years after the fact.

I’ve written about this campaign before, but it deserves a mention in any discussion of viral branded content. It’s a stellar example of how far a brand can stray from their product offering and still be hyper-relevant to their target audience.

So Always took a firm stand on the way women are subtly demeaned in society, taking the epithet “you [do something] like a girl” and turning it into empowerment:

Always’ target audience loved the message and shared it, and the video racked up more than 64 million views. And it still makes me cry.

One of my favorite quotes about humor in marketing comes from Tim Washer: “For those of you who think comedy won’t work for your brand, ask yourself: Will it work for your customers?”

By my estimation, 99.9% of people enjoy a good laugh. It only takes a few people to like and share your hilarious content to start it on the way to full-fledged virality. Granted, humor can be tricky—there’s tone, audience, and appropriateness to consider. But when you get it right, you can create something that’s sublimely silly and still gets your message across.

Example 1: Old Spice, “The Man Your Man Could Smell Like”

How do you communicate through a computer monitor the way your body wash smells? Old Spice seems to have considered the problem, and opted to punt. They built a commercial around “the man your man could smell like,” a studly muscle man who travels through a rapid-fire set of wish-fulfillment scenarios, from a shower to a boat to horseback in 30 seconds.

This video was inescapable back in 2010, with over 55 million views on YouTube, and it helped launch an entirely new creative direction for Old Spice.

The traditional form of railway public safety ads is to introduce a smiling couple, or a cheeky kid, then have them brutally killed in a grisly railway accident. They’re not ads meant to be enjoyed; they’re meant to scare the pants off of you.

Metro Trains Melbourne decided to trade the horror for something silly and adorable instead, and “Dumb Ways to Die” was born:

The catchy tune and cartoon mayhem earned over 100 million views on YouTube, the song landed in the Top 10 Downloads chart on iTunes, and a spinoff app got over 10 million downloads. Best of all, the content actually accomplished a purpose beyond virality: Metro Trains Melbourne says the campaign helped reduce train accidents by 30%.

Think about consumer-produced content that goes viral. Now subtract the cute animal videos and the “hilarious injury” stuff. What’s left is heartwarming human-interest stories. Think Chewbacca Mom, or the kid who loves garbage trucks, or 95% of the stuff on Upworthy.

How can brands bring a little heartwarming human interest to the mix? Here are two of my favorite examples.

This viral video from Volkswagen works on two levels. First, they did a real-life publicity stunt: They installed a slide on the stairs at a busy commuter train hub and encouraged people to use it. Then they filmed people’s responses and edited together an uplifting video:

There are kids delighted to see the slide, adults a little scared of the slide, and business executives in three-piece suits taking a ride, briefcases on their laps. You can sense how much fun the stunt was for everyone involved, and if the video doesn’t make you smile, your face may be on too tight.

What would you say to a job with no salary, no benefits, and 24-hour on-call demands? Would your response even be printable? That’s the question American Greetings asked unsuspecting consumers in this video. The reveal: The thankless, uncompensated job is being a mother. Watch the reactions when people figure it out, and have a hankie nearby:

The message is clear from a brand standpoint. Buy a card and send it to mom. But the human interest elevates it beyond a promotional message—as more than 27 million viewers demonstrated.

Aspire to Virality – But Don’t Ditch the Strategy

I’ll say it one more time: going viral is not a valid content marketing strategy. Viral is not a go-to amplification channel. If someone asks you to create viral content, tell them as much. And if someone promises to make something go viral for you, take that with an entire shaker of salt.

Instead of counting on going viral, take lessons from widely-shared content and use them to build content that will succeed with your target audience, whether or not it hits the zeitgeist and ends up on Ellen. Telling stories with data, taking a stand, and adding humor and human interest are all fundamental building blocks of great content marketing.

Learn more about creating a stellar content experience with our new quiz.