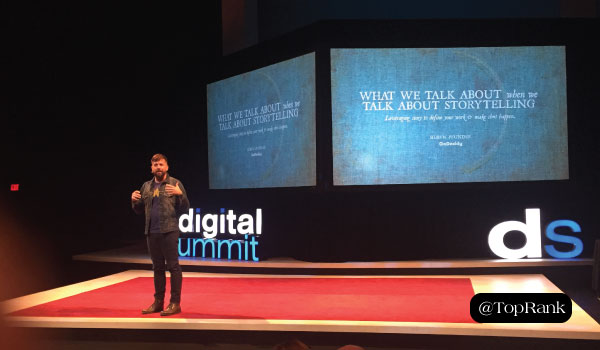 Storytelling is a buzzword that has made it’s way around the marketing block several times. And as GoDaddy’s Editor in Chief, Shawn Pfunder, shared, storytelling continues to be relevant because our brains are insatiable for stories.

Through stories of his own ranging from Christian Slater impersonations to a death-defying Grandfather, Shawn showed attendees at Digital Summit Minneapolis how to become more compelling storytellers.

Stories Are What Make Us Who We Are

The stories we’re told affect our actions. As Shawn pointed out, after we watch an action movie like Fast and Furious, we might drive a little faster and pretend we have a stick shift once we leave the movie theater. But it can go beyond that.

As an example, Shawn shared the remarkable story he grew up hearing about his grandfather. The man wasn’t supposed to be alive after suffering a heart attack, becoming the first guinea pig for defibrillation, and surviving 12 hours of CPR. His grandfather was told by his doctor, “You must be alive for a reason.” Well, after hearing the story, Shawn and every one of his relatives were convinced they were the reason Grandpa lived. That one story became a part of their DNA and became a driving force in their lives.

Those are the kinds of stories that make us who we are. Our dreams, nightmares, wishes, regrets, goals, desires, and more are stories that propel us forward and make us act. And we all have them.

The Power of a Template #HaikuChallenge

If we love stories so much and stories make us who we are, why don’t marketers use them for everything?

To solve this question, Shawn actually asked the audience to create a Haiku about Wonder Woman. As you may or may not know, Haiku’s have a finite structure. They’re just three lines, each with a set of syllables. And the audience created some killer poems, including these favorites:

@pfunder Who needs superman, when we have Wonder Woman. Women get sh*t done. #DSMPLS

The fact was, that once Shawn gave us a template—a Haiku—it was easy for us to start writing and get our creative juices flowing.

Three Story Templates to Live By

To help us marketers easily create stories, Shawn introduced three story templates we can use without fail.

Probably the most classic of all stories is the quest. Quests start and end in the same place, there are travel companions that help the hero, and the end result is often not what the hero expected. To give us an example of a quest story, Shawn used the iconic film “The Wizard of Oz.” Dorothy’s story starts and ends in Kansas, she has three loyal friends who help her on her journey, and in the end she finds she had the ability to go home all along.

Hollywood Example: “The Wizard of Oz”

Shawn reminds us that the key to a good underdog story is an unmatched rivalry. Think of Globo Gym and Average Joe’s of “Dodgeball”. Globo gym is better in athleticism, finances, and every other way that matters. Average Joe’s doesn’t stand a chance. But luckily for Joe’s, underdog stories also require a “wizard” that help give them the tools to succeed. With the help of dodgeball legend Patches, Average Joe’s had the dodge, dip, duck, dive, and dodge skills to get them through the tournament and defeat Globo Gym.

Stories of transformation focus more on the origin than the destination. In fact, Shawn says transformation stories spend more time on the disgusting and miserable parts of normal life. But then something happens and the hero’s life becomes better. Like a weight loss before and after photo, the difference is dramatic and significant.

Ready to Start Telling Stories of Your Own?

Shawn’s last piece of advice? Watch a movie, read a book, or find a story and try to recognize the thing about it that makes it special.

So we want to hear from you in the comments below. What do you plan on watching or reading next and why are you excited about it? Personally, I’ll be starting the new Netflix series “Ozark” because of its complex plot and leading man, Jason Bateman.