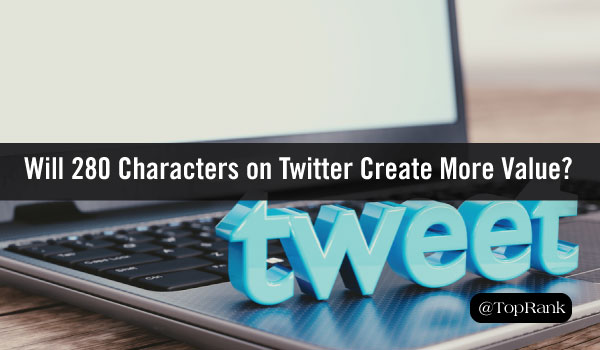 Last month, Twitter made big headlines after announcing it was in the midst of testing 280-character tweets as a way to give users more room to “express” themselves. The announcement came a little more than a year after Twitter stopped including links and photos in character counts.

“We want every person around the world to easily express themselves on Twitter, so we’re doing something new: we’re going to try out a longer limit, 280 characters, in languages impacted by cramming (which is all except Japanese, Chinese, and Korean),” the company said in a press release on its blog. “Although this is only available to a small group right now, we want to be transparent about why we are excited to try this.”

For marketers, many may feel like Christmas has come early. Let’s face it, writing a compelling and comprehensive tweet in just 140 characters is an art — an art that seems almost impossible to master. With double the amount of space, the pressure is off and marketers can unleash their full wordsmithing talent. Um, right?

Twitter’s 140-character limit has been a defining platform characteristic since its inception — and something many users are extremely partial to.

“Twitter is about brevity. It’s what makes it such a great way to see what’s happening. Tweets get right to the point with the information or thoughts that matter. That is something we will never change,” Twitter said in its release. “We understand since many of you have been Tweeting for years, there may be an emotional attachment to 140 characters — we felt it, too.”

While Twitter is confident that giving users more real estate will make it easier and more fun to tweet, marketers should not look at it as an opportunity to rewrite their tweeting best practices. The real opportunity here is to discover whether or not you can use that extra space to deliver more value and resonance to your audience.

Twitter's character limit change is an opportunity to learn if you can deliver more value. #marketing Click To Tweet

So, once “super-sized” tweets — as The Verge so eloquently called them — come to your account, don’t throw caution to the wind right away. Start with these actions:

Take a deep dive into your analytics dashboard to get a deeper understanding of how your audience is already engaging with your tweets and taking action on them.

Of course, the basic metrics are important because they can serve as your benchmarks. But also go beyond the metrics to start categorizing what content garners the most engagement so you can draw some more meaningful insights. For example, what topics seem to fire your audience up? How long are your most effective tweets? Are images or video a part of your most successful tweets? Which tweets featuring my website content got the most clicks? What really seems to be working? What’s clearly not working?

Use the information you uncovered during your audit to build out and launch a test campaign featuring longer tweets. Of course, build these tweets in accordance with what you know is working best with your audience, but also give yourself some space to experiment a bit. We’d suggest running the test for at least a month to get enough data to lead into the next action.

#3 – Analyze results and tweak your test.

Now it’s time to dive back into your analytics to understand how your test tweets stack up to your legacy efforts. Did you see a measurable rise or decline in engagement? What kind of engagement did you receive (i.e. increase in average comments or decrease in average retweets)? Was there a certain type of content that really benefited from that extra character room?

At the end of the day, character count simply doesn’t matter if what you’re sharing has no value or resonance with your audience. Since Twitter launched, the tight character count has been a creative restraint, challenging us all to say more with less. So, while you should certainly take advantage of the extra room when it makes sense, your primary objective should always be bringing insight and value to your audience. Because when they see the value you bring to the table, they’ll reward you for it.

What do you think about Twitter’s decision to double its character limit? Tell us in the comments section below.