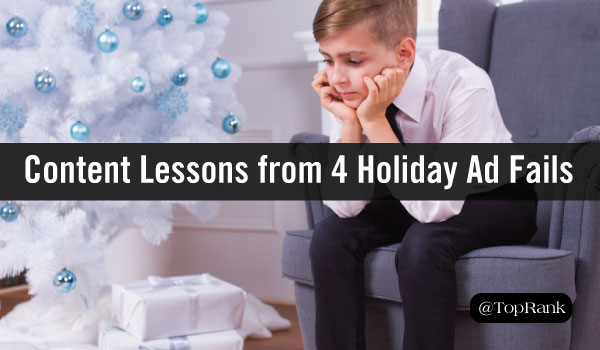 Making a great holiday ad should be simple. Start with a heartwarming message about love, peace, and goodwill. Add twinkling lights and evergreen trees and families getting warm by a fire. Then add your brand’s logo discreetly toward the bottom right. There you have it – a holiday ad that won’t offend, creep out, or annoy anyone.

It’s an easy formula, but one that a surprising number of brands mess up every year. Fortunately for us, they mess up in entertaining and educational ways. It’s almost easier to learn from a cautionary tale than a role model, so reveling in bad marketing can make you a better marketer.

These four holiday ads are certified disastrous, each in their own special way. And each has a lesson – or two – that marketers can use all year round. So prepare yourself for blasphemous meat products and yodeling cats: It’s time for some festive marketing fails.

If you have better things to do with three minutes, the song is about how awful the holidays are, how people are annoying, how children are the absolute worst…but we can all come together because KFC is delicious.

KFC’s a notoriously “edgy” brand on social media, so it makes sense they would launch a sourball right at the heart of the holiday season. But this video leaves a worse aftertaste than their potato wedges do.

I believe comedy is great for marketing. But there are so many layers of irony and misanthropy here that it’s hard for the joke to breathe – by the time the gospel choir comes in, it’s impossible not to roll your eyes. And even if it made you chuckle all the way through, did it make you hungry for KFC?

My Content Marketing Takeaway: Humor is great for marketing. Irony less so. Snarkiness infinitely less so. Stick with humor that invites your audience into your tribe and makes them feel good.

2. Sainsbury’s Turns a War Story into a Commercial

On the complete opposite side of the irony spectrum, we have the absolute deadly earnestness of Sainsbury’s Christmas ad from 2016. After you watch the video, you’re invited to watch two different behind-the-scenes videos – they’re that proud:

The ad tells the true story of American and German troops in 1914 that called a cease-fire on Christmas Day. They sang songs together, celebrated the holiday, and then returned to trying to kill each other the next day (the video stops short of that last bit).

There’s nothing wrong with telling this story, and even nothing wrong with a brand telling it. But it’s still cringe-inducing to have that ad tagline and Sainsbury’s logo pop up at the end. It makes me feel manipulated by a brand, rather than entertained by a story.

My Content Marketing Takeaway: If your brand is approaching sensitive subject matter, keep the branding subtle. Let the content take center stage, and don’t turn a beautiful moment into a commercial.

British bakery chain Greggs stirred up controversy this year with their advent calendar announcement. The ad featured a nativity scene with a sausage roll in place of the baby Jesus. Not surprisingly, some Christians objected to the imagery. And some people thought it was hilarious. And the bakery apologized while not really apologizing.

Greggs picked up some free publicity from the stunt, of course. But none of that publicity had to do with their delicious pastries. And they’re getting eyerolls from folks who are tired of edgy brands courting controversy during the holidays. It’s a tired move.

My Content Marketing Takeaway: I’m all for drawing in your tribe, even to the extent of repelling those who aren’t your target audience, by leading with your brand’s values. Stirring up pointless controversy doesn’t tell anyone about your brand, and doesn’t make a meaningful distinction to your target audience.

4. Whatever This Is that Walmart Did

So. Yodeling cat in a Santa hat for 51 seconds: Walmart! Right?

The thing is, this ad made some kind of sense back in 2011, when it came out. It fits in with an animation trend from the late ‘00s. Today, it’s just ugly and off-putting. And, of course, even back in the day it didn’t have anything to do with Wal-Mart.

My Content Marketing Lesson: Make your marketing timeless rather than trendy, useful rather than “viral,” sensible instead of utter screaming nonsense.

Happy Holidays and Beyond

When holiday advertising works, it’s a fine example of what content marketing can be: Uplifting, entertaining, empathetic, even valuable. When too much snark, aggressive branding, pointless controversy, or cat-yodeling gets in the way – well – at least it can serve as a warning to the rest of us.

Are you already looking past the holidays to the New Year? Explore four important marketing channels for 2018.