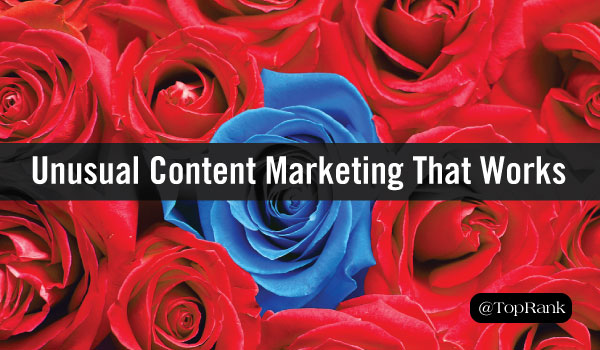 My favorite brand on social media is Denny’s. The diner chain eschews pretty much every marketing convention, and that’s exactly why its efforts stand out so much.

The company’s online personality has been compared to that of a “chill teenager.” Its Twitter feed is filled with juvenile humor, rarely promoting the restaurant’s actual food in any serious way. I doubt many people find the image of a pancake in a shoe appetizing. The Denny’s Instagram page looks like some sort of bizarre avant garde art project.

None of this goes by the book. But Denny’s scores tremendous engagement on almost every social media channel, and has developed a cult following of sorts on the web thanks to its quirky content. This has proven to be a significant differentiator for their business.

Right now, standing out with your content marketing efforts is more challenging than ever before. If you’re trying to adhere to the established “best practices,” I have bad news: so is everybody else.

This requires outside-the-box thinking. Those who go against the grain and pursue methods that counter the mainstream are frequently being rewarded, and in some cases maybe even setting new trends for the marketing world.

To illustrate, here’s a look at three unusual content marketing tactics and companies that have applied them successfully.

Sure, you could water down your content in order to make it appealing to the broadest possible audience. Plenty of businesses do just that.

Or, you could narrow your core following, and orient your messaging toward them directly. Speak their language, even if it might potentially alienate some folks who fall outside of that scope.

California-based apparel retailer Nasty Gal embodies this philosophy. Marketing to strong and independent young women in the mold of its founder Sophia Amoruso (of Girlboss fame), the brand’s voice is unapologetically sassy and in-your-face — sometimes even a little profane.

This was by design from the very beginning, as Amoruso told Wall Street Journal back in 2013:

“Nasty Gal really emerged from a conversation. I’ve probably spent more time than any other brand reading every last comment. To listen to people the way you’re able to online is very powerful. I think other companies are just starting to figure that out.”

Four years later, many are still figuring it out. Or too risk-averse to boldly embrace a targeted content style that borders on esoteric. Meanwhile, Nasty Gal continues to build affinity and loyalty with its very specific, adoring audience.

Last month on this blog, Josh Nite wrote about brands taking a stand based on values. That can be a scary thing. The standard playbook calls for companies to stay neutral on social issues, so as to avoid ruffling feathers and potentially turning away customers who lean strongly in another direction. As divisive and volatile as things can be these days, this mindset is magnified.

But as Josh noted, adopting an emphatic public stance can differentiate your business, define your audience, and inspire your employees. It can strengthen your company’s relationship with customers (and draw in new ones) who share your values, and generate positive third-party coverage. In many cases these benefits will outweigh the negatives.

Recently, outdoor clothing company Patagonia made waves by blacking out its website and replacing the usual ecommerce interface with this message, in the wake of President Trump’s decision to roll back public land protections in Utah: For several days, in the thick of the holiday season, it was a bit tricky to go and even order a jacket from Patagonia online. (You could still access their store by clicking an X up in the corner, but it wasn’t all that obvious.) That’s not a traditionally advisable business move, and probably costs the retailer some money in the short term. But ultimately, it has the potential to build brand loyalty.

It’s easy enough to maintain a presence on every major social media channel, especially with tools that enable you to post on all of them from one central app. Sometimes it’s as simple as copy-and-pasting the same message across different platforms, broadening your reach without a whole lot of addition effort.

The problem with this approach, however, is that it can dilute your brand and prevent you from achieving true greatness on any channel. Instead of trying to create social content that will work for every social network, why not focus on mastering just one? Determine where your customers mostly like to hang and then put all of your social media marketing effort into making that account as good as it can be.

One company that exemplifies this is White Space Studio, a creative agency in Hawaii that exhibits its design savvy through a stellar Instagram page. Sure, the company also has Facebook and Pinterest accounts, but doesn’t do much with them. And White Space doesn’t even bother with Twitter.

Does this limit their potential exposure? Perhaps. But by concentrating their attention on Instagram, they’ve built an exceptional showcase for their brand while achieving bigtime engagement. At TopRank Marketing, we love to get weird. Get in touch with us about your content marketing and we’ll help you develop some tactics that buck the norm.