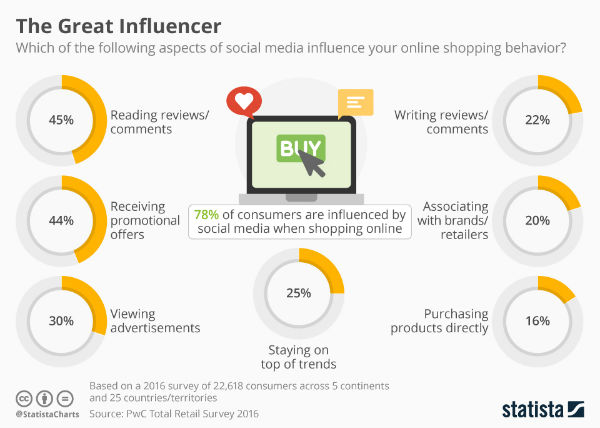 Social Commerce Takes Hold. A study by PwC reports that 78% of consumers are influenced by social media when shopping online. According to Marketing Week, the “social commerce boom” is being fueled by young mobile consumers. Thirty-three percent of 18- to 24-year-olds say they would purchase items directly on Facebook, 27% on Instagram and 20% on Twitter. For 25- to 34-year-olds, the numbers decrease a bit: 30% on Facebook. For 54- to 65-years-olds, it’s 10%. MediaPost

Snapchat Looking to Publish Content on Third-Party Websites With ‘Stories Everywhere’. The word from Cheddar is that Snap is developing a new program dubbed Stories Everywhere that will allow third-party publishers to embed Snapchat content on their websites. Let’s just hope it’s not too little, too late.  Variety

The Price Of Mobile Ads Will Surge More Than 45% In 2018. Mobile programmatic pricing is about to have its hockey stick moment, set to grow more than 45% by 2019, according to a projection released by programmatic agency Goodway Group. Ad Exchanger

Has Teen Use of Facebook Peaked? According to Forrester Research data, Facebook is the only platform of the 6 major social networks that’s experienced a decline in usage among 12-17 year olds.  MarketingCharts

Blockchain Pumping New Life Into Old-School Companies Like IBM. Demand for blockchain, best known for supporting bitcoin, is growing so much that it will be one of the largest users of capacity next year at about 60 data centers that IBM rents out to other companies around the globe. The market for blockchain-related products and services will reach $7.7 billion in 2022, up from $242 million last year, according to researcher Markets & Markets.  Bloomberg

Love In The Inbox: Americans Are Tied To Email, Study Finds. Email is not dead! 78% of Americans expect to use email as much or more than they now do in five years, according to Inbox Report 2018. MediaPost

TopRank Marketing In the News:

What was the top digital marketing news story for you this week?

Be sure to stay tuned until next week when we’ll be sharing all new marketing news stories. Also check out the full video summary with Tiffani and Josh on our TopRank Marketing TV YouTube Channel.

Happy New Year from the Team at TopRank Marketing!