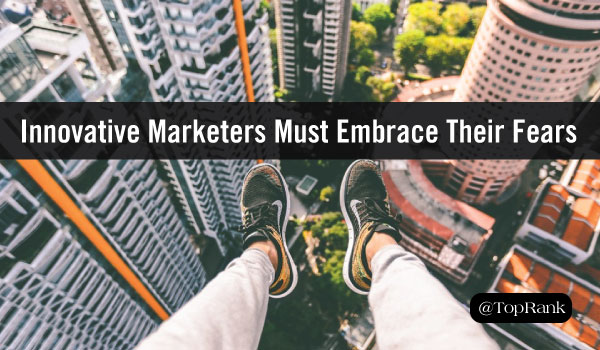 How can you confidently pour your heart and soul into a non-traditional marketing strategy, knowing it could either take flight or fizzle?

It’s a dilemma that outside-the-box marketers must wrestle with if they truly wish to innovate and transform their industry. The idea of experimenting with methods that haven’t been substantiated through successful practice is both exhilarating and terrifying.

When facing tight budgets, client expectations, and ROI demands, fear of failure often wins out. But to quote Seth Godin: “In a crowded marketplace, fitting in is a failure. In a busy marketplace, not standing out is the same as being invisible.”

The marketplace is now busier and more crowded than ever, so perhaps what we should really be afraid of is following the same established blueprint as everyone else. 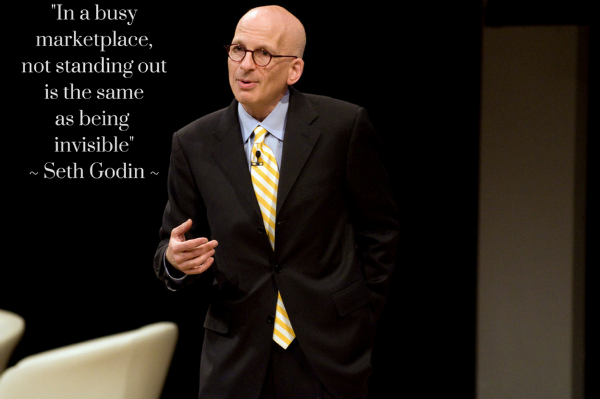 A while back, I came across a thought-provoking blog post from Ken Tremendous (that’s the online pseudonym for Michael Schur, writer for such TV comedies as The Office and Parks & Rec). One of the topics he covered was the process Lin-Manuel Miranda went through while creating his eventual Broadway hit, Hamilton: An American Musical.

Miranda spent many years writing this hip-hop history lesson, despite having no clue whether there was actually an appetite for such an unconventional piece of theatre. Schur summarized the internal conflict nicely in this excerpt from his post (edited to censor out the swears — this is a family blog!):

I’m far from the first person to say this – I’m probably somewhere around the millionth person to write about Hamilton, and the maybe 500,000th to make this particular point, but it needs to be said – a hip-hop Broadway musical about the founding fathers is an astoundingly terrible idea. Lin-Manuel Miranda should never have written it. As soon as he started to write it, he should’ve said to himself, “What the f*** am I doing?!” and stopped. And after he got halfway through, he should’ve junked it, gotten really drunk, and moved on with his life, and made his wife and friends swear to never mention the weird six months where he was trying to write a hip-hop musical about Alexander Hamilton. I literally guarantee you that when Lin-Manuel Miranda first told his friends what he was writing, every one of them reacted with at best a frozen smile, and at worst a horrified recoiling. Some of them might have been outwardly encouraging – “sounds awesome bud! Go get ‘em!” But then later, alone, they would call each other and say What the f*** is he doing?

In response to the blog post, Miranda tweeted, “I can confirm my friends were worried about me.”

Of course, if the Hamilton creator had given into self-doubt, or allowed the concerns of his well-meaning peers to derail him, the world would have never been able to experience his masterpiece, which went on to win countless awards while crushing at the box office still to this day. 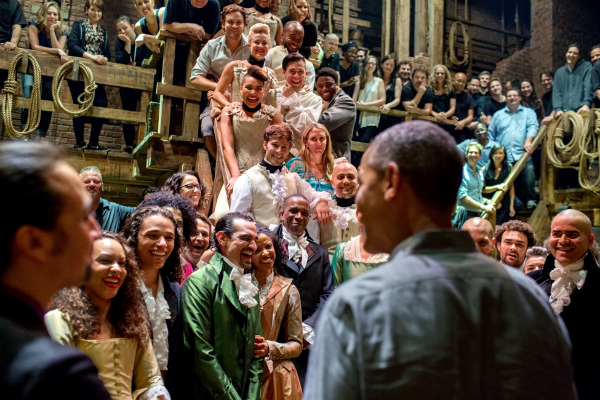 Schur’s oddly inspirational rant about Miranda stuck in my mind, and resurfaced as I was paging through Shift Ahead: How the Best Companies Stay Relevant in a Fast-Changing World, a new book from Allen Adamson and Joel Steckel. Examining dozens of case studies, the authors argue that the biggest mistake a business can make is getting too comfortable with success.

As Andrew Grove once observed, “Only the paranoid survive.”

In their book, Adamson and Steckel share a quote from Maryam Banikarim, CMO of Hyatt:

“Look at Airbnb and Uber,” she said. “If you had said to somebody ten years ago there’s going to be a business where you’re riding in someone’s car, they would have been like, ‘Are you crazy?’ There is no question that what will be here in ten years will not look like what it looks like today.”

That really is the crux of the matter. Marketers need to formulate their plans based on what the world will look like tomorrow, not today. No one can predict the future, but by relying on good data, meaningful trends, and your own intuition, you can make smart bets and get the necessary buy-in to execute.

At a time where businesses everywhere are trying to find deeper meaning and purpose in what they do, it’s wise to reflect on the core values that will drive you forward in the coming year. Here at TopRank Marketing, our focus is on nurturing a culture of brave marketers who aren’t afraid to be inventive and color outside the lines.

Developing this mindset requires three key ingredients, and whether you operate in marketing or any other line of business, I think they can apply in some way.

Boldness: The dictionary defines bold as “showing an ability to take risks; confident and courageous.” That pretty much sums it up.

Belief: In order to truly deliver on a bold idea, you need to believe — in your expertise, in your conviction, and in the ability of our team to help you achieve the results you envision.

Balance: It’s great to think big, but it’s also important to balance this ambition with evidence, realism, and respected outside input.

With that being said, don’t let yourself be discouraged by the occasional “What is (s)he doing?” or “Are you crazy?” In fact, sometimes these can be the very signs you’re on the right track.

Innovation rarely occurs without a bit of incredulity.