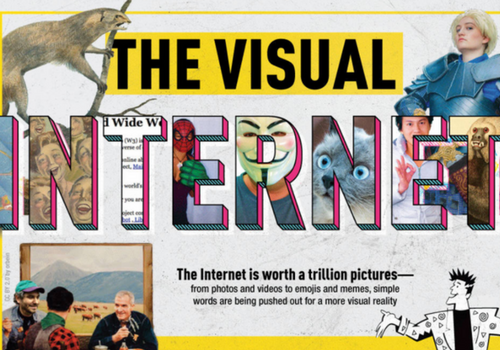 How to Keep Up With the Rise of the Visual Internet [Infographic]
Online media is increasingly visual — from personal photos to branded motion graphics, gif and videos. How can you keep up with the rising need for visual content? This infographic shares tips to help you stay on top of the trend and keep your viewers engaged. MarketingProfs

10 Million People Used Facebook Live on New Year’s Eve
It probably won’t come as a shock that, for most, the tradition of cozying up around an antennaed TV to watch the ball drop on NYE is behind us. Because in front of us — right in front of our faces — is Facebook Live. Ringing in 2018, Facebook Live topped their activity from the previous year’s NYE festivities, with people sharing 47% more live videos than last year.  Facebook Media

Google’s Rich Results Tool Allows for Testing of Structured Data
Google has a way of defining things (“Conversions” for instance) and now, they’ve defined Rich Results. “Rich Results” has been coined as a phrase to refer to rich snippets, rich cards and other “rich” additions to a website’s content. And Google’s new tool will test for all types of structured data that can be shown as rich results, pulling from sources including JSON-LD, Microdata and RDFa. The tool currently works for recipes, jobs, movies and courses, and Google plans to expand to more data types. Search Engine Journal

What Millennials Are Killing Now, And 24 Other Insights We Can Glean by Analyzing Tweets
6,000 tweets are posted every second, and anybody who’s stayed up past bedtime scrolling through the Twitterverse can attest that, yes, it can all add up to a LOT of noise. But each tweet is also a piece of data. Brandwatch has analyzed billions of those tweets, which they refer to as “live human thought,” and answered some of our most burning questions: Who was the most talked about character in Game of Thrones Season 7? Does Starbucks spell my name wrong on purpose? Brandwatch

2018 Will Be the Year Chatbot Conversations Get Real
AT&T recently revealed plans to roll out a “mobile 5G” network in a dozen markets by the close of 2018. The company indicated that the network would bring 5G service to everything from mobile and VR to car AI and home TV. Not to be left out, Verizon, Sprint and T-mobile are all working towards 5G as well — all with nuanced approaches.  VentureBeat

On Facebook, Viral Reach for Branded-Content Ads Eclipses Standard Ads
New research from Shareablee shows that branded-content ads get twice as many organic or earned impressions as they do paid impressions on Facebook. Organic impressions for the average Facebook ad make up less that 10% of impressions from paid promotion. Creating shareable content that performs well organically — with a little help from paid promotion — is proving to be a winning combination. MarketingLand

One In Ten Publishers Say They’re Not Labeling Native Advertising
Two new studies from the Native Advertising Institute show that about 10% of news and magazine publishers aren’t properly labeling their online native advertising. These publishers largely cited “meeting budget demands” as their reason for doing so, even though 25% say this practice is one of the biggest threats they see to native advertising. MediaPost

Snapchat May Force Users To Watch Three Seconds Of Ads Before Skipping
To help increase their perceived value in the market, Snapchat is considering making their ads skippable only after the first three minutes. Currently, Snapchat users skip ads within the first second of viewing, where the industry standard for a successful ad lies around the two second mark. AdAge

Six Surprising Facts About the Way We Spend Our Time with Media
Believe it or not, in a world where we’re continually surrounded by media, some stats about its use can still surprise us. For example, U.S. adults spend more time listening to on-air radio than they do on social networks. eMarketer

2018 Will Be A Pivotal Year For Facebook’s Video Ambitions
Mark Zuckerberg has recently proclaimed that he sees video as a “megatrend.” True to form, this trend has caused Facebook to act by placing video first across the Facebook group of apps. The platform has upped their investment in video already, but it plans to invest an additional billion dollars in 2018. Digiday

Sneaky Ads: In China, the Characters From the Show Appear in the Commercials, Too – Ad Age

TopRank Marketing In The News:

What was the top digital marketing news story for you this week?

We’ll be back next week with more digital marketing news! Have something to share in the meantime? Tweet us @toprank or drop me a line @Tiffani_Allen.