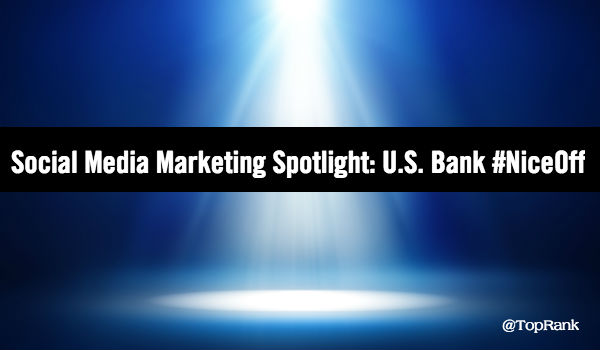 Roughly 120,000 visitors from 130 countries descended on the Twin Cities last week to take part in Super Bowl LII festivities hosted in downtown Minneapolis. To welcome visitors to the Land of 10,000 Lakes, Minneapolis-based U.S. Bank—which just so happens to have its name on the stadium that hosted the big game—wanted to give visitors a taste of “what Minnesota is all about.”

For those of you who haven’t heard, Minnesota—where TopRank Marketing is proudly based—isn’t just known for its frigid winters and as the birthplace and residence of the late Prince Rogers Nelson. It’s also known for its “northern hospitality”—or as it’s affectionately called—Minnesota Nice.

With Minnesota Nice as their inspiration—and some great strategic thinking—U.S. Bank launched the #MnNice #NiceOff conversation and friendly competition on Twitter, inviting its followers and other local brands to try to “out-nice” each other by sharing acts of kindness that are Minnesota Nice signatures.

The result? A social media marketing campaign that was thoughtful, engaging, subtly brand-centric, and influencer-activated.

While the conversation started with the single tweet below, the campaign was in the works for weeks. 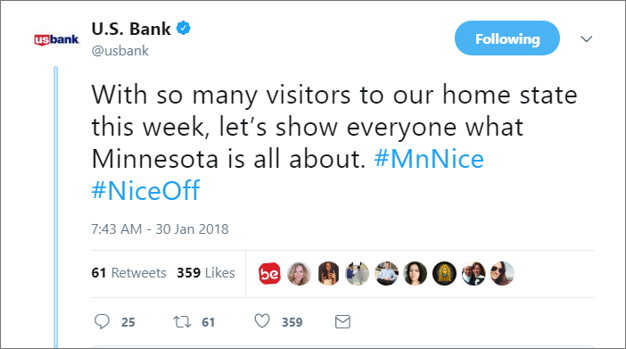 As it so happens, TopRank Marketing alumni and current U.S. Bank Social Media Campaign Manager, Jason Schober, was part of the action. And he was gracious enough to give us an inside look.

“We really wanted to evoke some engagement and brand activation within the community of people that would be participating in the activities leading up to and at the big game,” Schober told us.

Eventually, the Minnesota Nice-themed campaign strategy emerged as a winning idea. To get started, the team team laid out a strategy that would ensure FCC compliance by not mentioning financial products or services in communications, respect Super Bowl guidelines since U.S. Bank was not a direct sponsor, and make sure the campaign made sense for their brand identity and voice.

The campaign was in great shape, but U.S. Bank didn’t want to go at it alone. So, roughly a week before launch, they began to form partnerships with other local, well-known brands—including Target, Land O’ Lakes, Sun Country and 3M—to be part of the conversation. However, none of the partnering brands knew what others would be posting until it unfolded on launch day (Feb. 1), which kept the conversation real and spontaneous. Here’s a shot of the beginning of the conversation. 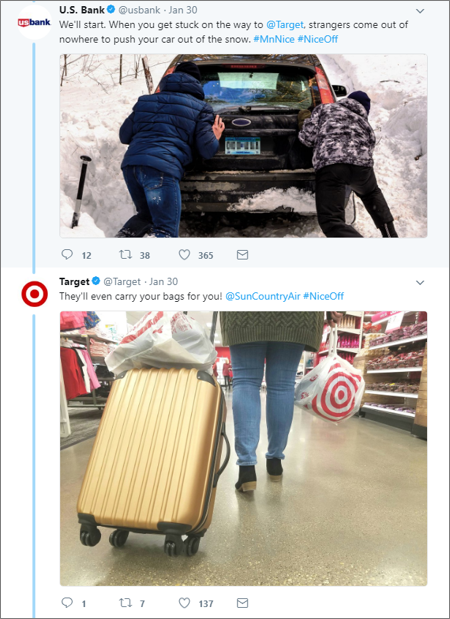 For the work we do at TopRank Marketing, this move is directly tied to the power of influence in marketing. By partnering with influential brands, U.S. Bank was not only able to add credible voices to the conversation, but also extend their reach to these brands’ respective audiences. In addition, once the ball got rolling, other brands and individuals were given an organic opportunity to get in on the fun. Of course, many of the interactions cleverly intertwined a brand’s own marketing message. Here’s one of our favorites: 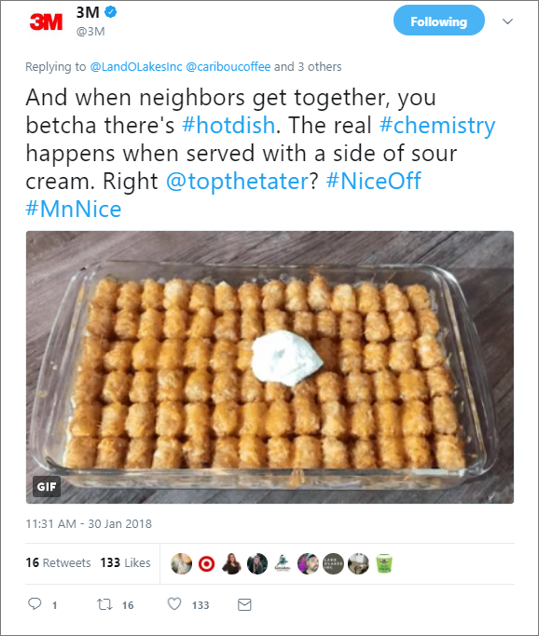 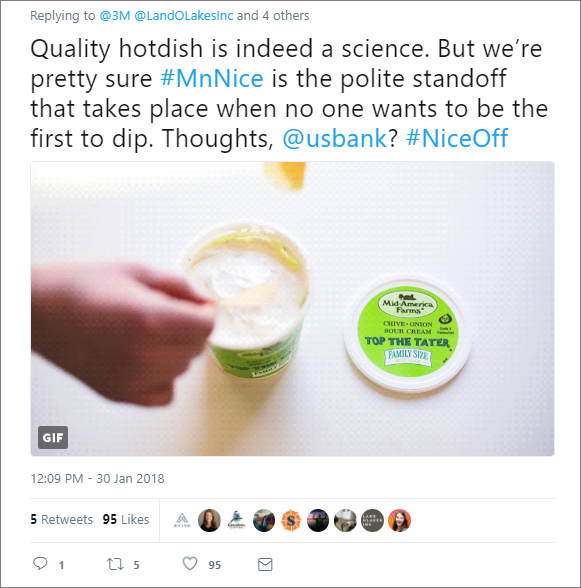 When it came to selecting the right hashtag to define the conversation, their approach was two-pronged, according to Jason.

“The original idea was #MinnesotaNiceOff,” he explained. “But for both tracking and engagement purposes, we decided to leverage two hashtags: #MnNice and #NiceOff. Reason being, we knew #MnNice was already being used and could open our conversation up to a broader audience, and #NiceOff would be something we could own and brand the conversation with.”

A thoughtful, integrated social media marketing strategy is an absolute must. Start by looking at any compliance and trademark red tape, as well as how a campaign will integrate with and complement your brand. Then ask yourself: What other credible, influential voices can be added to elicit shared value?

There’s little doubt that trolls and disgruntled users are commonplace on social media these days, often trying to ruin the spirit of good conversation. And in today’s world of social media, hashtags are conversations. So, when it comes to branding your marketing message with a hashtag conversation starter, marketers need to prepare for the fact that they don’t necessarily own the content or the conversation.

For U.S. Bank, they knew the risks of starting the #MnNice #NiceOff conversation. But they also believed the campaign easily lent itself to passively putting trolls in their place. As you can see from the thread below, U.S. Bank made it a point to go full-out with the campaign theme when confronted with negativity. 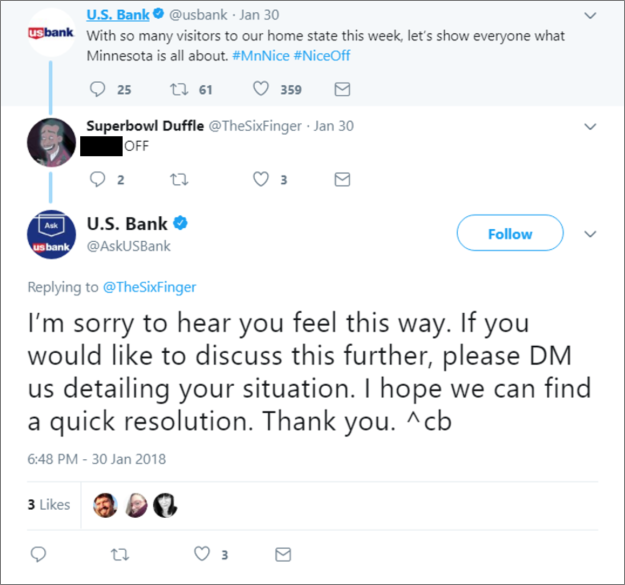 “Our entire campaign was centered on Minnesota Nice,” Jason said. “The only appropriate response to these kinds of interactions was to be as overly polite as possible.”

When it comes to anticipating trolls or negative responses, consider the worst-case scenario for your hashtag-branded campaign and build it into your overall strategy. As our own Joshua Nite recently wrote on the topic of proper hashtag usage, when creating your own hashtag, ask yourself:

Once the tweeting began on launch day, Jason said his team was using Spredfast as a helpful tool to monitor, track, and respond in real-time. But once it became clear that the conversation was on the right track—barring input from trolls—the team decided to leverage Twitter Moments to turn the conversation into a storytelling space.

“This was already in the original plan because we wanted to continue to tell the story beyond the initial conversation,” Jason told us. “But we were waiting for the momentum to take over before creating the Moment.” 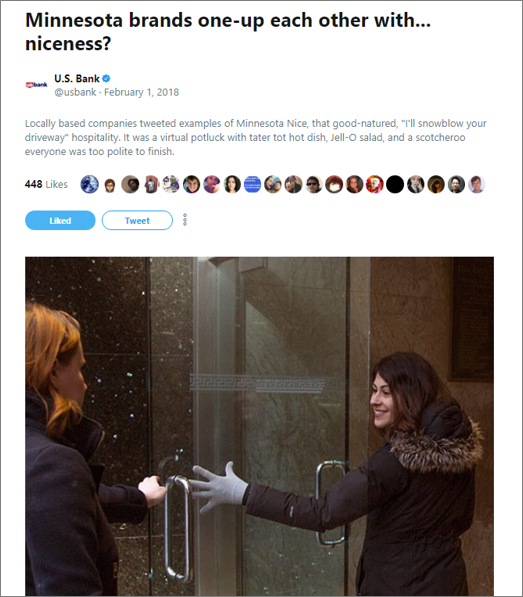 Whether it be a campaign or every-day usage, make sure you understand the full capabilities of any social media platform you’re engaging on. This will not only help you think more strategically about your messaging and interactions, but also help you provide more value for your audience. This is especially important in the age of decline (or extinction) for organic visibility on social platforms.

Shine the Social Media Spotlight on Your Brand

For brands and marketers of all industries, social media hashtag campaigns like this serves as a great example of running a smart, strategic, and integrated campaign.

By thinking strategically from start to finish—and inviting like-minded, influential brand voices to the table—U.S. Bank was able to not only capitalize on one of the biggest sporting events of the year, but also garner meaningful and organic interactions, engage in some friendly competition with other local brands being gracious Super Bowl hosts, and spotlight and activate their brand identity.

Want some more inspiration from brands on Twitter? Take a peek at both B2B and B2C brands mastering the art of social customer care on Twitter.