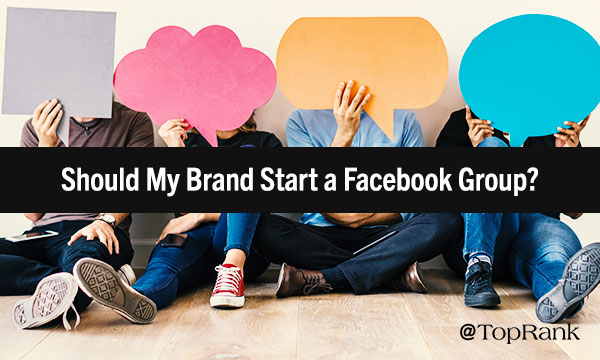 Despite its recent bubble of controversy, marketers still view Facebook as the prime destination for social media marketing.

The newly released Sprout Social Index 2018 reaffirms this, with 97% of social marketers saying they use the platform.

However, while almost everyone is incorporating Facebook into their strategies, not so many express confidence that it’s making the desired impact. Last month’s 2018 Social Media Marketing Industry Report showed only 49% reporting a belief that their Facebook marketing is effective.

With algorithmic changes deprioritizing publisher content on Facebook feeds, and thus suppressing organic reach for brands, marketers are feeling the crunch. As I wrote here recently, “Facebook’s gargantuan active user base is impossible to ignore. We just need to get creative in finding ways to connect with people there.”

One creative solution that marketers are increasingly turning to is Facebook groups.

Are they worth your time and effort? Let’s explore.

According to the Sprout Social Index, social marketers point to increasing community engagement as their No. 2 biggest goal, right behind boosting brand awareness. Facebook groups are very much in line with this objective. They are mini-communities, where members are empowered to speak up and (in many cases) can engage directly with company reps, in addition to one another.

Although groups have long been available as a feature on Facebook, the brand-driven “Facebook Groups for Pages” were just rolled out last year. You can find a helpful primer on setting one up here, via Social Media Examiner.

“Pages (are) for pushing key marketing messages and product information, as well as an outlet for customer support. Groups is a dedicated space for more in-depth, meaningful conversations and relationships between a brand and its fans.”

Another attractive element of Facebook groups is the added analytical depth through Group Insights, which provides information about trends and usage patterns in your membership.

With growing emphases on engagement, authenticity, and community-building, it’s easy to see the appeal of Facebook groups as a marketing asset. And some are tapping into it very well. One notable example is Peloton, the cycling fitness company whose closed members group boasts an extremely active ecosystem of more than 92,000 members.

But not everyone is finding traction on this front.

With growing emphases on engagement, authenticity, & community-building, it’s easy to see the appeal of #FacebookGroups as a #marketing asset. And some are tapping into it very well. But not everyone is finding traction. - @NickNelsonMN Click To Tweet

Although the potential benefits are clear, the path to achieving them is a bit murky. For every success case like Peloton (which had the advantage of a three-year head start thanks to a preexisting member-driven community), there seem to be several examples of companies spinning their wheels in frustration.

While Peloton has hit its stride with groups, another popular fitness brand is searching for a second wind. As Digiday explained in May regarding Fitbit’s exploration of the tactic:

“The company created 12 different groups geared toward major cities like San Francisco, Los Angeles and New York. Each group has around 200 members, but that’s a far cry from the 2.4 million followers of Fitbit’s Facebook page. Fitbit’s group for fitness-focused San Francisco had only 11 posts in the past 30 days.”

The problem is that around 200 million groups exist on Facebook, making it difficult to gain visibility, especially for new creations. To assist with this, CEO Mark Zuckerberg announced earlier this year the integration of a Groups tab intended to “make groups a more central part of the Facebook experience.”

“In addition to the new tab,” TechCrunch notes, “the company is launching a new Groups plugin that admins and developers can add to their websites and emails that solicits people to join their Facebook group.”

Some marketers have understandably been reluctant to dive into this functionality over concerns that Facebook will change gears and renew its focus six months from now, but I believe it’s safe to say — based on the social network’s clear commitment to elevating active participation and “meaningful communities” — that groups are going to be a mainstay feature going forward.

In assessing whether a Facebook group is worth launching for your B2B or B2C business, we recommend asking yourself these questions:

#1 – Are community conversations relating to my product or service useful?

If community is core to your offering, then Facebook groups are most likely going to be a fit. But you don’t want to force it. The most resonant groups bring users together over a shared passion where they can transfer knowledge, stories, and ideas. For instance, the highly popular Instant Pot Facebook group has become a destination for owners of the electric cooker to troubleshoot and post their own recipes.

“You’re only going to get those super-users and superfans,” says Meg McDougall, Social Media Strategist at TopRank Marketing. “If you have that audience, it’s a great opportunity. But you’re not going to build it out of nowhere.”

When it comes to #Facebook groups, you're only going to get super-users & superfans. If you have that audience, it's a great opportunity. But you're not going to build it out of nowhere. - @megnificent #SocialMediaMarketing Click To Tweet

#2 – Do we have the bandwidth to run a group and grow it?

Don’t underestimate the commitment that running an active Facebook group can require. In order to get going, and especially to sustain, groups need attention and administration. You may want to have a content producer or community manager specifically designated for this task.

Also, be ready to have employees promote your group in various ways, such as mentioning it in content and including it in email signatures.

#3 – Is it truly going to be a value-oriented interaction hub, or simply another vehicle for brand promotion?

“If your brand starts a Facebook group, think of yourself as a facilitator rather than a marketer or blogger,” suggests Emily Gaudette in her post at Contently. “You’ll lose the group if you only promote your own work.”

This is pretty much a cardinal rule of content marketing in general, but especially important in these kinds of community-fueled endeavors. Oftentimes, the brand play should be very subtle, and customers will hopefully start associating your product or service with the topic because it’s where they go to talk about it and find good info.

Without question, Facebook groups are more worthy of our attention than they were a year ago at this time. Dwindling organic reach for company pages on the platform, along with a strong commitment from corporate leadership to grow the feature, make this an intriguing frontier.

But as things stand, these spaces are really more about fostering and evolving engagement within your customer base as opposed to rapidly growing that base. And given the time and effort required to get it right, some brands might not find the payoff worthwhile.

In other words, don’t give in to groupthink.

“Look at what your end goal is for social,” McDougall urges. “If it’s reaching a ton of people, expanding your audience, and getting impressions, groups probably aren’t the best route. If it’s targeted interactions and deeper engagement, they can be really helpful.”

For more guidance on social media marketing that meets your objectives in a fast-changing environment, check out some of our recent write-ups on the subject: