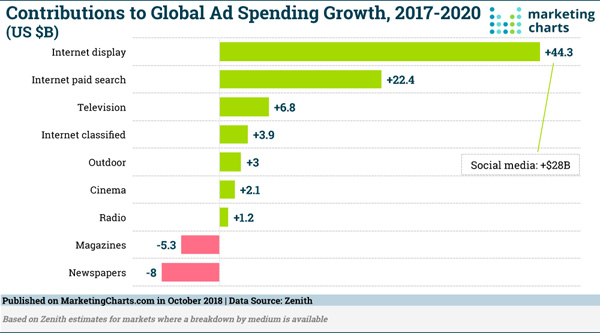 Social and Search Forecast to Contribute Two-Thirds of Global Ad Growth Through 2020
By 2020 search and social are expected to account for 66 percent of global ad spend growth, according to new research data by Zenith. Video ad spend growth has also surpassed that of static images. Spending for online video ads is forecast to grow annually by 18 percent, while that of social media looks to grow by 16% annually. MarketingCharts

Reaction: Facebook advertisers on alert as network breach exposes 50m user accounts
In the wake of Facebook’s recent revelation of a security breach that exposed some 50 million user accounts, advertisers have reexamined their advertising with the social media giant, and some have pulled the plug entirely, at least temporarily, including Mozilla and Sonos. The Drum

Reddit Surpasses 1 Billion Video Views, Closes in on 1 Million Uploads Per Month
Reddit has announced that the social news aggregation and discussion site has topped the billion native video view mark, while also nearing a million video uploads per month. Reddit also revealed that its ad revenue has tripled over the past three years. DigiDay

Employers Are Looking for ‘Influencers’ Within Their Own Ranks
The Atlantic has taken a close look at how some employers are eyeing their own employees and customers as brand ambassadors. The Atlantic

SAP, Microsoft and Adobe announce data alliance
Adode, SAP (client), and Microsoft have announced a data alliance, with the launch of the joint Open Data Initiative. The move is meant to streamline interoperability between the business software firms’ respective platforms. Reuters

Facebook Added a Premium Option for Its In-Stream Video Ads
Facebook has announced a new premium version of its in-stream video advertisements, with better placement available to a group of select publishers and creators. AdWeek

What are some of your own top content marketing news items for the week?

Thank you for joining us, and we hope you’ll check in once more next week for a new group of the most relevant digital marketing industry news, and in the meantime you can follow us at @toprank on Twitter for even more timely daily news. Also, don’t miss the full video summary on our TopRank Marketing TV YouTube Channel.