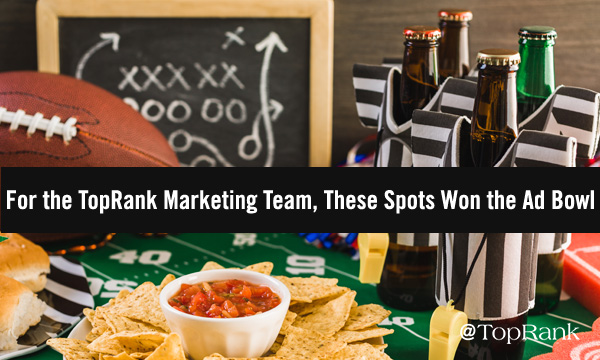 According to the sacred laws of modern television, digital, and on-demand viewing, consumers spend a whopping 364 days a year actively avoiding advertising and marketing messages.

From strategic bathroom breaks and the embracing of alternative, bingeable entertainment channels to the installation of ad-blockers, consumers want to avoid unsanctioned commercial interruptions—whenever and wherever they’re enjoying content.

But when Super Bowl Sunday rolls around, it’s Opposite Day—and for a few glorious hours, we’re on the edge of our seats with excited anticipation of the next ad to dance across the screen. It’s the Super Ad Bowl.

For the average consumer, this phenomenon is simply an entertainment tradition. For marketers, it’s a series of case studies in marketing storytelling, creativity, and boldness in action.

And this year, there were several case-in-point ads that entertained the TopRank Marketing team as consumers and inspired us as marketers. Below team members share their winning picks for the ads that won the “Super Ad Bowl.”

In a time of political and social upheaval—a time of distrust and divisiveness—Google takes time remind us that we are united by a common language: A language of gratitude, affection, and connectedness. And, of course, it’s multilingual Translator service helps bring people and these love languages together.

As a search engine that is increasingly powered by machines, in this piece Google showcases the tangible human benefits its platform offers, while also encouraging us all to choose unity. It’s a stunningly beautiful message and incredible brand marketing. This one topped my personal list of 2019 faves, and my colleague, Social and Content Marketing Manager Lane Ellis, felt the same:

“Google helps put the ‘G’ in global with its Google Translate Super Bowl 2019 spot, with a touching look at how its translation services are being used every day to say small things that mean so much,” he shared.

Since the summer of 2017, Bud Light’s medieval marketing campaign featuring the “Dilly Dilly” catchphrase has been a beer lover’s favorite. With several commercials now part of the series, it’s safe to say that Super Bowl viewers were anything but surprised once the beer company’s newest ad started rolling on Sunday—that is until “The Mountain” of HBO’s hit show, Game of Thrones, made his appearance.

“It was a good reminder that breaking audience expectations is really effective in creating genuine surprise and excitement,” Content Strategist Annie Leuman shared.

But the real marketing magic, Annie said, is happening on social media—with both brands leveraging the “Bud Knight” as a way to continue the buzz and excitement. 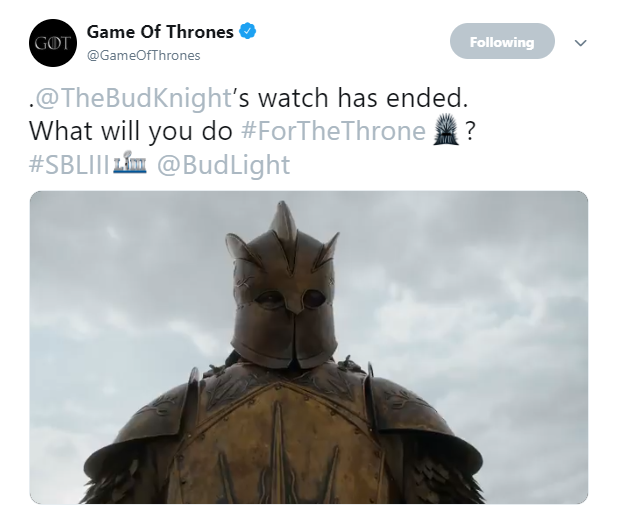 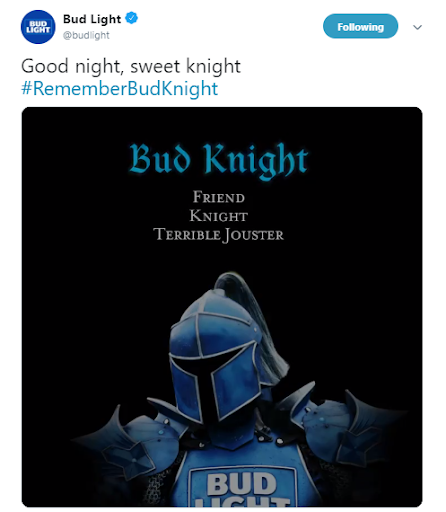 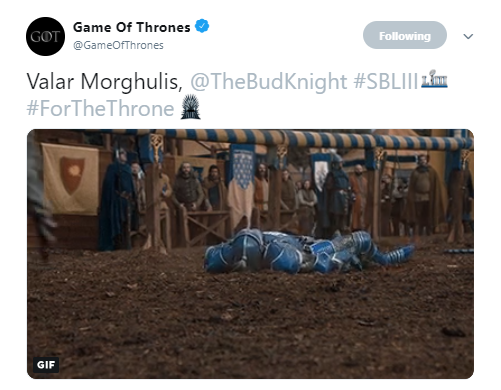 Of course, with many avid GoT fans around the office, Annie wasn’t the only one moved:

“This ad had a fabulous surprise ending and we saw the merger of two fabulous brands,” Debbie Friez, Influencer Marketing Strategist, said. “I’m not sure it sold me on Bud Light, but as a Game of Thrones fan, I’m even more excited for the final season.”

#3 – Burger King’s #EatLikeAndy Stands Out Thanks to Simplicity

Creativity in marketing comes in many forms—and sometimes it’s in the simplest form. With over 50 Super Bowl commercials competing with each other and the hype of the game, there was a lot of noise during this year’s event. And for our CEO Lee Odden, the most memorable ads were simple and singular in their focus.

“The commercial that exemplified simplicity best for me was the #EatLikeAndy spot from Burger King,” he said. “There’s basically no dialogue or promotion. It’s just vintage video of the real Andy Warhol opening a BK bag, pulling out a Whopper and eating it, finishing with the #EatLikeAndy hashtag.”

Lee added: “It may have been the retro simplicity that made the BK commercial stand out, the fact that we can all relate to the ketchup bottle struggle, or Casey Neistat’s recent BK joke video making the Burger King brand top of mind. Whatever the reason, the #EatLikeAndy commercial is the one that stood out amongst a blur of ads during one of the most boring Super Bowls I’ve ever seen.”

Our brains are programed for stories. And Microsoft’s story-centered ad aimed at showcasing the power of technology—accessible technology that is—engaged our minds and our hearts in its cause.

“Everything about this commercial tugged at the heartstrings,” Account Manager Claire O’Neill shared. “There wasn’t a dry eye in my house.”

“This ad pulled at my heartstrings with all the feels,” Debbie seconded. “But what made it really incredible was the story—it was great content; a great story with a beginning, middle, and great ending. In addition, Microsoft has featured some of these kids in other ads, too, showing off some creative repurposing.”

Over the last couple years, sparkling seltzer has become the new battleground for many drink makers. Of course, La Croix is perhaps the most well-known of brands. And as any up-and-coming or niche brand knows, gaining awareness ground is the first order of marketing business.

PepsiCo’s young Bubly brand is coming up in the world, according to Influencer Marketing Strategist Jack Fitzpatrick.

“For me, nothing will beat Michael Bublé sitting on the floor of a gas station pouting, surrounded by cans of PepsiCo’s Bubly sparkling water,” he laughed. “This commercial fit perfectly into the brand’s fun-loving personality and featured the well-liked Canadian singer as the spokesperson. This total please-all ad for a makes sense for a brand that is working to grab market share from sparkling water goliath, La Croix.”

Tension is a key storytelling element—and perhaps one that marketers don’t leverage often enough. Tension builds excitement and intrigue, and it commands attention.

Hulu’s intense adaptation of Margaret Atwood’s The Handmaid’s Tale checks all those boxes—within each episode and it’s teaser trailers.

As Account Manager Jane Bartel describes it: “The trailer capitalizes on all my fears as well as they do in the show, and makes me not want to miss the next season.”

“From a marketing perspective, it very effectively teased the content to existing viewers (and probably attracted some new ones) by using an almost ‘propaganda-esque’ opening showing how women are entering the workforce in large numbers, and healthy babies are being born all over the place,” Tiffani Allen, Associate Director of Search and Analytics, adds.

“The spot then takes a turn to show that this is, in fact, not the reality and shows the movement of women actively fighting back and ‘burning’ the system,” she says. “It was powerful to see that kind of contrast within messaging while staying on narrative.”

Nostalgia and familiarity are incredibly powerful marketing and engagement tools. Look no further than the resurgence of classic tales such as those from the Star Wars franchise hitting the box offices every year.

This year, Stella Artois leveraged three iconic characters—each of who are well-known for having a signature drink—to evoke nostalgia, while also challenging potential customers to embrace change.

And yes. I said three iconic characters. Sarah Jessica Parker reprises her Carrie Bradshaw character from Sex and the City, while Jeff Bridges appears as “The Dude” from the cult classic The Big Lebowski. Finally, in the full version, we briefly see Jonathan Goldsmith, who for a decade portrayed “The Most Interesting Man in the World” for Dos Equis.

When Super Bowl Sunday rolls around, the brands and their ads are the showstoppers. Which ads and marketing messages resonated most with you? Tell us in the comments section below.

You can catch TopRank Marketing at several upcoming events, including this week on Feb. 6, 2019. Join Lee Odden as he presents a live webinar with BrightTALK on the future of collaborative B2B content.