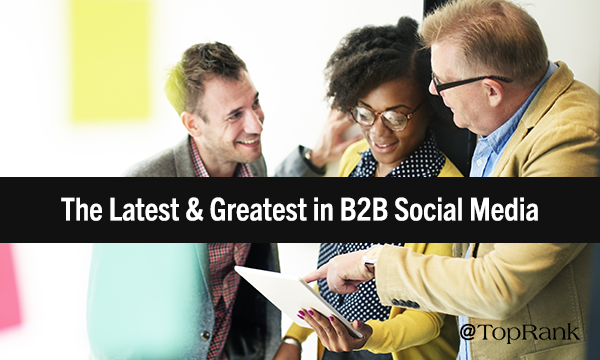 And while platforms are ardently focused on heightening the everyday user’s experience, the movements we’ve seen so far in 2019 signals that B2B brands will still have some things to look forward to.

This is a teeny sampling of the social media headlines we saw in the first quarter of 2019 alone:

Below we dive into a handful of the latest and greatest changes that have caught our attention.

In April, Twitter Co-Founder and CEO Jack Dorsey sat down with Chris Anderson and Whitney Pennington Rodgers of TED for a roundtable discussion on the state of his company, with much of the discussion centering on Twitter’s conversation health and how to improve it.

As TopRank Marketing’s Senior Content Strategist Nick Nelson reported: “Some of the possible changes hinted by Dorsey are relatively minor and uncontroversial … But the bombshell of the interview came with Dorsey’s allusion to an entirely new structural underpinning for Twitter.”

Dorsey said that he believed Twitter is “best as an interest-based network,” suggesting that a shift from following accounts to following topics could be part of Twitter’s future.

While only time will tell whether Twitter actually follows through on any of its hopes and dreams for improving conversation health, even a small shift in making it easier for users to find and engage with topics they care about is good news for B2B brands and marketers.

“Brands need to be speaking the language of their customers and reaching them in the right context,” Nick wrote. “Fewer trolls and more substantive, expert content organized around topics would make the platform a stronger piece in any B2B digital marketing strategy.”

Read: The Impact of Twitter’s Proposed Shakeup on Marketers and Influencers

In mid-April, LinkedIn announced new post reactions were starting to roll out, which would allow users to express themselves beyond the “like.” Within the last week, reactions have gone mainstream. As LinkedIn’s Cissy Chen wrote:

“You can use Celebrate to praise an accomplishment or milestone like landing a new job or speaking at an event, or Love to express deep resonance and support, like a conversation about work life balance or the impact of mentorship. Insightful can help you recognize a great point or interesting idea, while Curious lets you show your desire to learn more or react to a thought-provoking topic.”

This isn’t an earth shattering development by any means. I’d say it’s a natural evolution of the platform. However, it’s still great news for B2B marketers: An array of reaction options will help you better understand the impact of your posts. Naturally, this kind of qualitative data can guide your messaging strategy on the platform, helping you share content to pique interest and engagement.

The interesting thing moving forward will be whether LinkedIn refines the emotional mix. Currently, reaction options don’t allow for expressing anger, disappointment, or sadness. And as all social networks strive to bolster safe, positive spaces for communication and interaction, this could be a slippery slope.

Thousands of developers, creators, and entrepreneurs descended on San Jose, CA for Facebook’s 2019 F8 conference, an event dedicated to discussing the future of technology.

During his opening keynote, Facebook Founder and CEO Mark Zuckerberg revealed a long list of coming changes—including a redesign. But this is no run-of-the-mill refresh, rather one that “puts your communities” at the center.

Facebook Stories still appears to have a prominent top spot, but the News Feed—the product of a historic past redesign itself—will be taking a backseat to Facebook Groups and event listings.

“There are tens of millions of active groups on Facebook,” Facebook said following the first day of F8. “When people find the right one, it often becomes the most meaningful part of how they use Facebook.” Last year, we explored the growing interest in and adoption of Facebook Groups among brands. With increasing engagement as a top priority, Groups are mini-communities that can foster direct communications with prospects and customers, and build brand affinity without hard-sell marketing messages.

Today, it appears that is the future of “organic” marketing on Facebook. As our Nick Nelson so eloquently said months ago:

“Some marketers have understandably been reluctant to dive into this functionality over concerns that Facebook will change gears and renew its focus six months from now, but I believe it’s safe to say — based on the social network’s clear commitment to elevating active participation and ‘meaningful communities’ — that groups are going to be a mainstay feature going forward.”

For many B2B brands, Facebook marketing has traditionally focused more on highlighting company culture, news, and events rather than straight content promotion. But with what’s to come, it’s worth exploring whether Facebook should be more (or less) of a focus moving forward.

Read: The Question on Many Marketers’ Minds: Should My Brand Start a Facebook Group?

Instagram has been gaining prominence within B2B marketing strategies, representing an opportunity to establish a brand’s visual identity—something that can be hard to capture when physical products don’t exist.

With the launch of Instagram Stories, B2B interest in the platform reached a new level, allowing for serialized storytelling as well as the implementation of links and calls to action. Of course, augmented reality (AR) filters are a signature feature within the Stories platform—and now any developer or brand can create them through the Spark AR Studio.

“Over the past year, more than 1 billion people have used AR experiences powered by Facebook’s Spark AR platform, with hundreds of millions using AR each month across Facebook, Messenger, and Instagram,” Facebook reported. “They’re expanding the language of expression, transforming the way we shop, and adding meaning to real-world objects in fun and interesting ways.”

Under the right circumstances, creating a custom filter could be an opportunity to foster awareness or engagement at a major B2B industry event, encourage advocacy among employees or help with recruiting efforts, or promote the release of a new asset or product. In addition, this could be a great influencer activation tool.

If Instagram is going to be a core focus of your B2B marketing efforts going forward, this new development for Stories is at least worth reading up on.

Read: What You Need to Know About Instagram Stories for B2B Marketing

Keeping Up with the Changing Social Media Landscape

What social media news item has got your attention? Tell us in the comments section below.