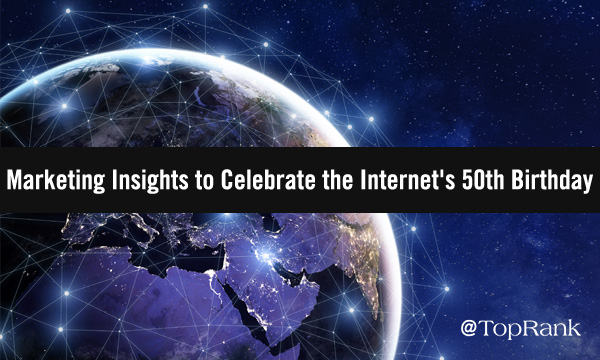 The collection of technologies that make it possible for you to read this are now 50 years old, as the Internet recently celebrated its first half-century milestone, and we wanted to mark the occasion by sharing a selection of top digital marketing and tech insights from the 1960s to 2020 and beyond.

Starting with the 1960s and working our way through the 2010s, we’ll explore some of the classic technology and marketing that has become synonymous with the Internet, and we’ll also look ahead to an unknown but surely fascinating future. On October 29, 1969 the first online message was sent, between computers at UCLA and the Stanford Research Institute, using ARPANET — which would eventually morph into the Internet we know today.

The first message was planned to be the command “login,” however the system crashed upon typing in the second letter.

A second attempt at sending “login” was made — this time successfully, infamously cementing “LOL” as the first three characters ever sent online, combining the “lo” from the first failed message and the “l” from the start of the successful second message.

Early researchers and users of the ARPANET and the computers it eventually linked paved the way for what would become the Internet and — decades later — the Web, and some had keen insight into the possibilities of the new online technology.

“We believe that we are entering a technological age in which we will be able to interact with the richness of living information-not merely in the passive way that we have become accustomed to using books and libraries, but as active participants in an ongoing process, bringing something to it through our interaction with it, and not simply receiving something from it by our connection to it.” (Kurzweil Library)

The Web and the rise of social media revolutionized and globalized the type of ongoing online interactions Licklider and Taylor predicted more than 50 years ago, and they also went on to change the face and future of marketing.

“Marketing is too important to be left to the marketing department.” — David Packard, co-founder of Hewlett-Packard Click To Tweet

Marketing departments are vastly different today than when the first “LOL” was sent in 1969, however, utilizing ever-growing numbers of digital and traditional channels and techniques, and offering expanded methods such as content marketing that even Packard may have admired.

An even earlier visionary in predicting online possibilities is philosopher and sociologist Ted Nelson, who coined the term “hypertext.” In 1960 his Project Xanadu sought to create a global computer publishing system using hypertext linking to build a universal library, an idea that was a forerunner to what would become the Web. 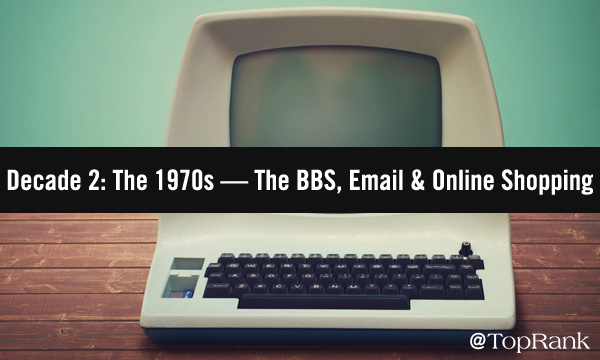 The 1970s brought the first e-mail, e-commerce systems, secure online transaction processing, and the bulletin board system (BBS), the true precursor to the Web.

Ward Christensen is the father of the BBS, programming the CBBS software during a Chicago blizzard in 1978, and also the creator of the XMODEM protocol that made early file transfers easier.

“CBBS was certainly the most fun programming project ever,” Christensen has said. “My original idea of a message system was to have users contribute articles for our [computer] club newsletter, but as it formed, a message system seemed more interesting,” he added. (Slashdot)

Christensen’s BBS technology grew to connect personal computer users around the world in a way that had never been seen in people’s own homes, freeing information exchange from the often-exclusive hold that educational, military, and government computers had previously held.

An early e-commerce patent was filed in 1972, while 1976 brought secure online transaction processing for financial institutions, and in 1979 the first online shopping system was demonstrated. Here’s a 1977 ARPANET logic map, showing popular computer nodes of the day such as the PDP-11: In the world of marketing, the 1970s brought the creation of so-called synergy marketing, and the amount of ads consumers saw daily grew.

The American Association of Advertising Agencies has estimated that in the 1970s the average U.S. consumer was exposed to some 1,600 daily ads, with just 12 of those generating a reaction.

The campaign went on to become one of the most famous campaigns of the twentieth century, as Duke University explored in “Uncola: Seven-Up, Counterculture and the Making of an American Brand.”

Here’s one of the Un-Cola videos:

The “un” theme is still used today, as 40 years later marketer Scott Stratten published his “UnMarketing” and “UnSelling” books, as our CEO Lee Odden explored in a 2014 interview here.

“Focus on the stories behind the logo — create current positive experiences and long-lasting ‘wow’s to delight and move your market into comfort and loyalty.” — Scott Stratten @unmarketing Click To Tweet 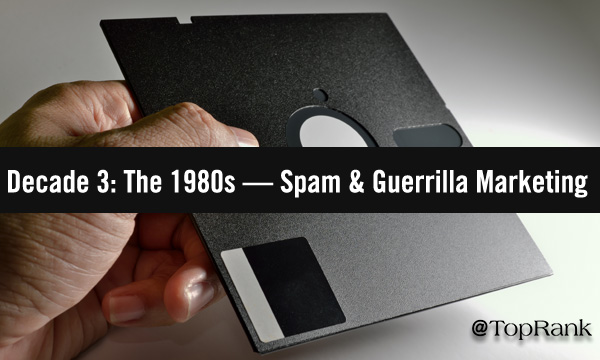 The 1980s saw the first development of database marketing, the precursor to the powerful customer relationship management (CRM) and social media marketing systems we have today.

The ‘80s also saw the emergence of relationship marketing, guerrilla marketing, desktop publishing, and the first computer-oriented spam — although some claim to have encountered spam in the late ‘70s.

In 1983 the film “Wargames” came out, and for teenagers like me it was an early mainstream exposure to home computer modems and online hacking. A year later I bought a Commodore 64 computer and a modem and started my own BBS, which I operated until 1990.

Here’s a screen-shot from my old BBS: 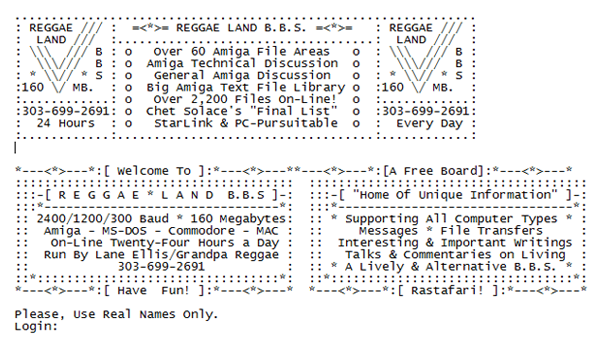 Marketers often point to Apple’s Macintosh-debut television commercial as not only one of the top ads of the 1980s but of all time, having been selected by both Advertising Age and TV Guide as the greatest commercial ever.

“Perhaps one of the best commercials and marketing strategies of all time was the Orwellian Apple Macintosh advertisement entitled ‘1984,’ which launched the Macintosh revolution. The one-time airing of the 60-second spot during the 1984 Super Bowl became a watershed of American advertising.” (AdAge)

Here’s the commercial, which ran during the 1984 Super Bowl:

In the briefing for the commercial, Apple co-founder Steve Jobs said, “I want to stop the world in its tracks.” (Adweek) 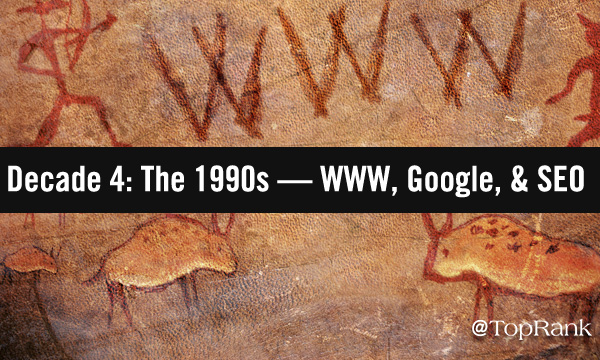 With the 1990s came the launch of the World Wide Web and its first webpages, the incorporation of Google and Amazon, the first forays into SEO (Search Engine Optimization), viral marketing, CRM, and Integrated Marketing Communications (IMC).

When Sir Tim Berners-Lee invented the Web, one of his biggest goals was to make it easier for people to find information on the Internet — an ambition that has undoubtedly seen tremendous success perhaps beyond any other technology in history.

The Web as I envisaged it, we have not seen it yet. The future is still so much bigger than the past. — Sir Tim Berners-Lee @timberners_lee Click To Tweet 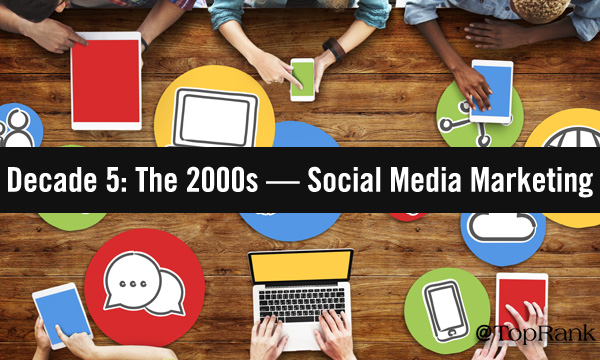 The decade of the 2000s saw the emergence and meteoric rise of social media, as LinkedIn (client) and MySpace launched in 2003, Facebook in 2004, and Twitter in 2006. It also brought the widespread use of integrated marketing.

One Internet pioneer who has worked at the forefront of online technology since the 1960s is Vinton Cerf, who in 1973 co-developed the TCP/IP protocol that the Internet uses, and who has worked for Google since 2005 as a vice president and chief Internet evangelist.

With such a lengthy history in technology, Cerf still finds time to look ahead. “I’d like to know what the Internet is going to look like in 2050. Thinking about it makes me wish I were eight years old.” (Esquire)

“The closer you look at something,the more complex it seems to be.” — Vinton Cerf @vgcerf Click To Tweet The 2010s have so far seen the continued development of influencer marketing, the founding of Instagram in 2010, Pinterest in 2011, and TikTok in 2017, the latest in a history of marketing that stretches back over 1,000 years.

Happy 50th birthday, Internet, and here’s to a marketing and tech future filled with continuing innovation, meaningful storytelling, and even more powerful connections.

We’ve also taken time this year to look ahead to the trends and tactics that will unfurl in 2020 and beyond. Here are five recent articles to help your marketing efforts as we take online marketing into its next 50 years.