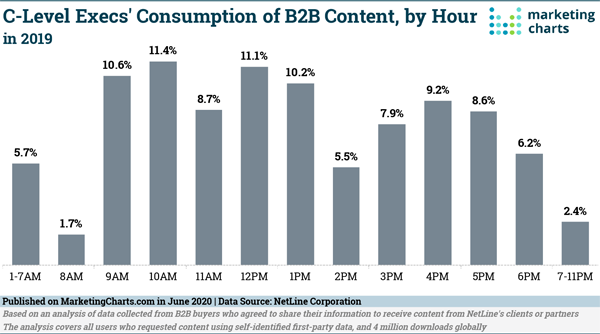 Twitter now lets you schedule tweets from its web app
Marketers looking for alternatives to how they schedule tweets now have the option to do so directly within Twitter itself. Twitter’s rollout of what had been solely a test feature that began in November also includes the ability to save draft tweets, the firm has announced. The Verge

Would People Rather Watch an Ad or Share Their Email Address?
U.S. consumers prefer watching an ad over offering up their email address, with nearly 75 percent saying that they would choose a 30 second ad in exchange for free content, while only 25.4 percent said that they would rather disclose their email information, according to newly-released report data. MarketingProfs

Email Flies: Engagement Rises By 200% During COVID-19 Pandemic
Email marketing has met increasingly-engaged audiences during the pandemic, with engagement rates up some 200 percent according to new report data. The study also found that Google Ads and paid social climbed by some 52 percent, while paid search has seen a drop of 44 percent. MediaPost

YouTube’s new Chapters feature lets you jump to a specific section of a video
Digital marketers have a new tool for YouTube video content, as the Google-owned firm has rolled out YouTube Chapters — an optional smart indexing feature that splits videos into parts to make finding certain information within a video easier. CNET

Instagram is Testing a Double-Story Stories Feed with Some Users
Facebook-owned Instagram’s popular Stories feature has been expanded to show twice the number of Stories at once, as part of a test that also included new methods for switching between Stories, the firm recently announced. Social Media Today

Consumers want social ads to show return to normalcy, study says
More consumers want brands to place greater focus on helping foster a return towards normalcy than how to stay safe during the pandemic, especially among those in the U.S., according to recently-released global survey data. Mobile Marketer

Facebook Adds Option to Send Marketing Emails via Pages App
Facebook has been testing a new feature that lets marketers keep a contact database in Facebook and create email campaigns to be sent directly from the platform, including the ability to upload email lists via spreadsheets, the social media giant has announced. Social Media Today

Does Your B2B Content Target an Active Audience?
Tuesdays and Wednesdays at 10:00 a.m. and noon are the top B2B content consumption days and times among executive corporate level B2B buyers, according to recently-release survey data from NetLine. MarketingCharts Have you come across your own top B2B content marketing or digital advertising stories from the past week of news? Please let us know in the comments below.

Thanks for taking the time to join us, and we hope you’ll return again next Friday for more of the most relevant B2B and digital marketing industry news. In the meantime, you can follow us at @toprank on Twitter for even more timely daily news. Also, don’t miss the full video summary on our TopRank Marketing TV YouTube Channel.