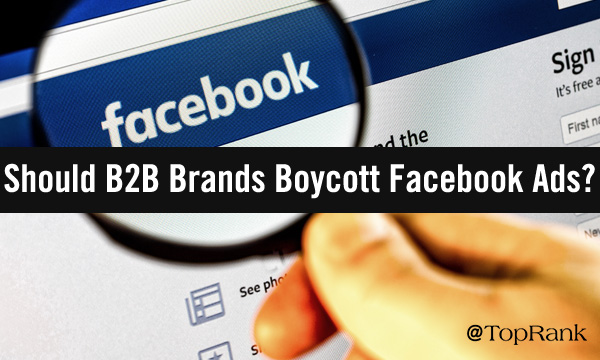 Facebook has always presented an interesting conundrum for B2B marketers. It’s not a business-centric platform, necessarily. But with so many active users (nearly 2.5 billion at last check), keeping Facebook out of a brand’s social mix has been tough to justify.

Recent developments are making this decision more complicated than ever.

Facebook and Trust: A Rocky Relationship from the Start

When the world’s largest social network first came into existence in a Harvard dorm room, nearly two decades ago, it was known as “The Facebook.” An instant-message conversation between founder Mark Zuckerberg and an unnamed associate around that time later came to light, and … it isn’t pretty (via Business Insider):

Zuck: Yeah so if you ever need info about anyone at Harvard

[Redacted Friend’s Name]: What? How’d you manage that one?

Zuck: They “trust me”

Oofdah. Okay, so Zuckerberg was 19 at the time. He’s grown up since then, as has his humble app. But in many ways, that snarky little remark foreshadowed what was to come for his company.

Ever since being born out of a contentious lawsuit involving the betrayed Winklevoss twins, Facebook has been almost constantly embroiled in some sort of high-profile controversy relating to user privacy, data security, political exploitation or societal accountability. The “Criticism of Facebook” page on Wikipedia is astonishingly long. From the Cambridge Analytica scandal to Russian election interference to fraudulent ad metrics, Zuckerberg’s platform has tested the trust of users and advertisers alike, time and time again.

The latest wave of negativity crashing over Facebook might be the most significant yet, spurring a boycott that seems to be gaining steam by the day. Any business with a presence on the platform should be paying close attention.

The “why” basically comes down to this: growing sentiment that Facebook isn’t doing enough to stifle hateful rhetoric and stop its spread. Zuckerberg will argue that his platform’s conservative approach to censoring or removing questionable content owes to a steadfast commitment to free speech, but many others are less charitable. That includes a number of his employees. It also includes a coalition of organizations – the NAACP and Anti-Defamation League among them – that launched the #StopHateForProfit campaign, aimed squarely at the ‘Book.

As for the “who”? The list of companies known to be pulling ads on Facebook is long, and full of recognizable names: Starbucks, Patagonia, Adidas, Clorox. Notably, the list is also very B2C-centric at this point. Although there are several companies with business-facing elements (e.g. Microsoft and Verizon), you won’t find a straight-up B2B company in this mix. Yet.

Should B2B Companies Distance Themselves?

There’s no simple or universal answer. Every brand should evaluate the pros and cons of pulling back from Facebook.

On the one hand, there is that aforementioned enormous user base. No matter what industry or vertical your company operates in, there’s almost no question your customers are on Facebook. And if you’re not advertising or sharing content on the platform, there’s a good chance your competitors are.

On the other hand, B2B decision makers are consumers as well. There’s a good chance plenty of them feel the same frustration toward Facebook based on its recent history and its track record. As I wrote recently when discussing the tenets of building trust on social media today, “People need to trust the environment where they encounter your message in order to trust the message itself.”

There isn’t really any pressure on B2B brands to take action on this front now, since others aren’t doing so. But that does mean it’s an opportunity to proactively take a stand and make a statement. If your company takes the lead on this matter, your customers and community are likely to remember it.

Ultimately, this decision ought to be based on a thoughtful assessment of your brand’s values, and how they connect with those of your customers and employees. The latter should not be downplayed — Facebook’s “virtual walkout” exemplifies what can happen when there’s misalignment between a company and its employees.

We are living in a tenuous time where trust is at a premium. Brands are wise to think deeply about each tactic and channel in their marketing mix, and Facebook is deserving of heightened scrutiny with all that’s going on.

“We are living in a tenuous time where trust is at a premium. Brands are wise to think deeply about each tactic and channel in their marketing mix, and Facebook is deserving of heightened scrutiny with all that’s going on.” @NickNelsonMN Click To Tweet

No one’s trust should be taken for granted. That’s a lesson Zuckerberg and his social media goliath still seem to be learning as their own B2B arm feels the sting from boycotting brands.

For more guidance on building trust in today’s environment, I recommend reading Lee Odden’s post on How to Build Influence with the C-Suite and on the Street with Customers.