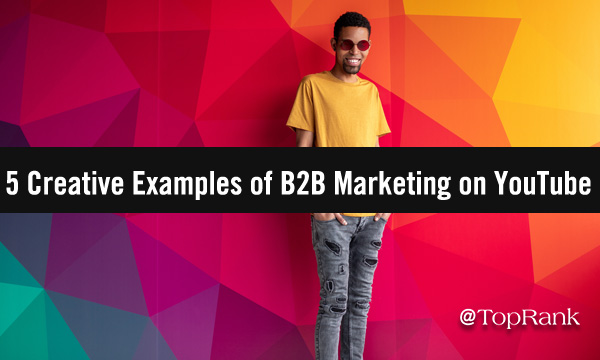 What’s new at YouTube, and how are B2B marketers using the world’s largest video platform in creative and engaging campaigns?

Google’s omnipresent YouTube brought in revenue of over $15 billion in 2019, has over two billion monthly active users (MAUs), and by some estimates is considered as the world’s number two search engine, making it nearly inescapable for B2B marketers seeking to host and promote video content. While not necessarily out of this world, YouTube’s orbit casts a wide swath in the B2B marketing universe. 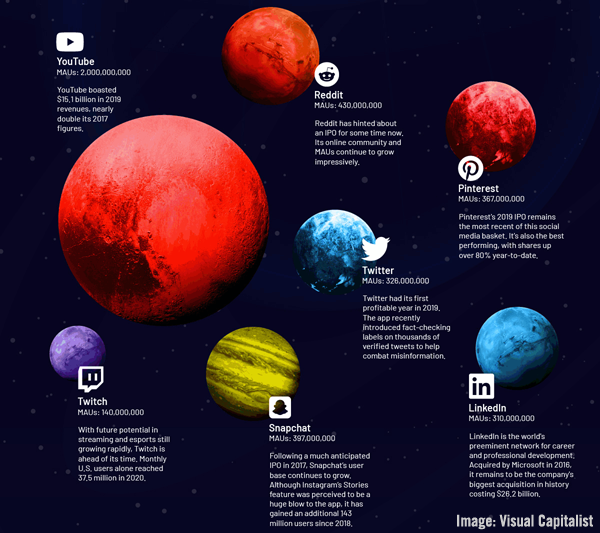 During the pandemic, video and webinar content has seen the largest increase in views according to recently-released PathFactory survey data, leading the Association of National Advertisers (ANA) to suggest that “Now Is the Time for B2B Content.”

64 percent of B2B buyers have increased their use of online video during the pandemic, according to newly-released report data from Google and Ipsos, which has also showed a whopping 88 percent increase in the usage of digital marketing overall.

Another study by MediaPost and Bombora also saw increased interest in video during the global health crisis — a move that’s not surprising considering the power of video to drive authentic engagement in as little time as possible, as we’ll see in our five examples from B2B firms using YouTube in creative ways. First, however, let’s look into the latest news surrounding YouTube. 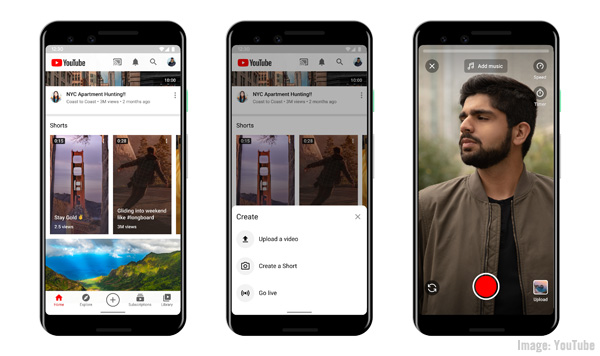 These short video features squarely spring from the popularity of TikTok, and have come at a time when the beleaguered company — now sought for acquisition by Oracle* — has faced significant challenges with its U.S. operations. Oracle’s proposed deal with TikTok — owned by ByteDance, its parent company in China — has met with initial approval by some advertisers.

Oracle, which has recently forged partnerships with firms including Zoom, may at first seem like an odd fit for the acquisition of an app dedicated to short-form video creation and sharing, however should it succeed in controlling TikTok’s U.S. operations it would undoubtedly lend a significant infusion of enterprise-level business exposure.

That could pave the way for increased B2B use of the type of short videos that can be created with TikTok, Instagram Reels, and YouTube Shorts, and with ever-more content being viewed on smartphones, vertical video undoubtedly has a massive audience.

YouTube — which said that its Shorts feature provides a way to “discover, watch and create short, vertical videos on the YouTube app.” — has allowed users worldwide to upload short vertical video using the #Shorts hashtag, which will feature Shorts videos on YouTube’s coveted homepage.

YouTube Shorts video can include music and feature multiple segments and playback speeds, along with timers for recording hands-free video, the firm said.

The rise of vertical video brought on by TikTok and now Instagram and YouTube may end up making the format another standard digital asset for B2B marketing design teams, with its own strengths in areas such as mobile, and weaknesses in others such as display on traditional desktop and non-smartphone devices.

On the advertising front, YouTube is planning to launch engaged-view conversions (EVC) metrics by the end of the year, bringing data on viewers who watch at least 10 seconds of a video ad and subsequently click away, yet nonetheless end up converting within a set number of days, YouTube recently noted.

“By the end of the year, we will make engaged-view conversions a standard way of measuring conversions for TrueView skippable in-stream ads, local campaigns and app campaigns,” Nicky Rettke, YouTube director and product manager of YouTube Ads, explained in a recent post on the Google Ads & Commerce Blog.

On the live-streaming front, YouTube has continued to embrace the multi-billion dollar esports vertical —  which is comprised of more than 400 million players globally — offering a number of advertising opportunities for certain B2B brands.

Whether 2021 will see more B2B brands sponsoring esports players or events remains to be seen, however B2B marketers may be taking a closer look at opportunities in esports, as Rosalyn Page recently examined in “What Brands Need to Know about Esports.”

Live-streaming has also gained momentum in the relatively new area of streaming e-commerce, backed by firms including Amazon, and as Bloomberg News recently reported, the practice is expected to generate more than $100 billion in global sales in 2020.

While more video is being watched than ever due to the pandemic, a significant amount of video seen on social media timelines is viewed with the sound turned off, making it more important than ever to ensure all video content has quality subtitling available along with a #Captioned hashtag.

A good resource for information about video captioning for YouTube and elsewhere is Meryl Evans, an acknowledged “#Captioned pusher” and a fellow former bulletin board system SysOp.

In B2B marketing, YouTube video content doesn’t necessarily always need to be traditional camera footage, as alternative formats such as animation are becoming easier to create than ever before, as Victor Blasco, chief executive of Yum Yum Videos recently explored in “Making Animated Marketing Videos That Engage Customers.”

In more ways than one storytelling is truly at the heart of powerful marketing messages, as witnesses in spades in HP’s new “Dear Future Me” video campaign, which offers a heartwarming spin on the practice of writing a letter to your future self, chronicling the stories of six recent high school graduates who wrote themselves such letters six years ago, when they were in the sixth grade.

As part of the campaign, HP’s landing page for the initiative offers a downloadable PDF form where anyone can write their own letter, and incorporates a “We can’t wait to meet the future you” message to end the first of the two-part series of mini-documentary videos.

The second episode lets current sixth graders write letters to their future 2026 selves, and shows them telling their own stories centered around the challenges of the pandemic. “Just try to remember: if you got through this year, you can get through anything,” one student encourages her future self.

HP’s YouTube video descriptions for the series include handy links to the other video in the series, along with an extra link to subscribe to the firm’s channel — a simple yet often-overlooked practice that allows viewers who may have over years trained themselves to ignore YouTube’s own ubiquitous red “Subscribe” button.

Adobe’s* “Honor Heroes” campaign, a collaborative global artistic effort to help support the battle against COVID-19, is centered around a single minute of video that has to date tallied nearly 3.5 million views.

During that one minute the work of artists and other creative people is shown, each piece inspired by the pandemic.

On Adobe’s YouTube channel the video’s description includes the campaign’s hashtag #HonorHeroes, and a link leading to a section of Adobe’s website with an image of each of the 116 people chosen as heroes, and a link to their respective Instagram profiles. The campaign’s video is also playable from the page.

Adobe ties the page into their own Instagram account as well, encouraging page visitors to see more about the heroes campaign using the same hashtag this time to link to their Instagram profile and specifically those posts utilizing the campaign hashtag — a technique that can be effectively used to move customers to content on various brand social media channels.

The campaign was also featured on the company’s blog, offering additional context about the campaign with insight from some of those involved, a donation link to the Direct Relief organization, and an embedded instance of the campaign’s YouTube video.

For Kevin O’Leary’s video, Constant Contact has used a detailed description of the spot, with a link to learn more on their website’s blog along with links to five of the firm’s social media profiles.

In Deloitte’s “A World Reimagined: The 2020 Global Millennial Survey” video, the effects of the pandemic on young people in the millennial and Gen Z demographic are visualized and brought to life, highlighting their energy for building a better world.

In addition to watching the video, a micro-site for the campaign allows visitors to download the related report — which surveyed more than 18,000 millennials and Gen Zs across 43 countries — view a replay of the initial live-stream video event related to the effort, and offers an infographic for download and sharing.

The site also includes a Twitter stream of tweets centered around the campaign’s #MillennialSurvey hashtag.

In its “EY Megatrends 2020 and Beyond” video, Ernst & Young looks ahead to future trends and their overall larger meaning — one of its numerous YouTube channel videos exploring the firm’s service offerings and helpful financial-related insight.

Ernst & Young also uses its YouTube profile to share how it has responded to COVID-19, to announce its world entrepreneur of the year, and to archive its live-streaming video from LinkedIn* Live.

Maliha Aqeel, director of global communications at Fix Network World and former assistant director of brand marketing and communications at Ernst & Young, sat down with our senior content marketing manager Joshua Nite to share a look at the role of B2B company culture in driving employee and customer satisfaction, in “Break Free B2B Series: Maliha Aqeel on How to Ace B2B Company Culture.”

Marketers and communicators within organizations have to take the charge. Our job is to take all of those values and say, 'Here's how it could look. Here's how the intangible becomes tangible.' @MalihaQ on #CorporateCulture #BreakFreeB2B Click To Tweet

YouTube offers much more to marketers than simply being the default spot to host and play back video, with ample social features for B2B brands to highlight other channels to follow, threaded viewer commenting if wanted, the forthcoming YouTube Shorts format, an ever-increasing number of ad formats and placement options, and remains a powerful platform for B2B influencers to engage their audience.

We hope you’ve gained at least a few new ideas from looking at the latest news about YouTube, and that you’ll find inspiration from the five fine examples we’ve explored from HP, Adobe, Constant Contact, Deloitte, and Ernst & Young.

Video is only one facet of a well-rounded B2B marketing strategy, yet one that plays an important role in campaigns that attract, engage, and convert. Find out why firms including Adobe, LinkedIn, SAP, Dell, 3M and others have chosen to work with TopRank Marketing — drop us a line.